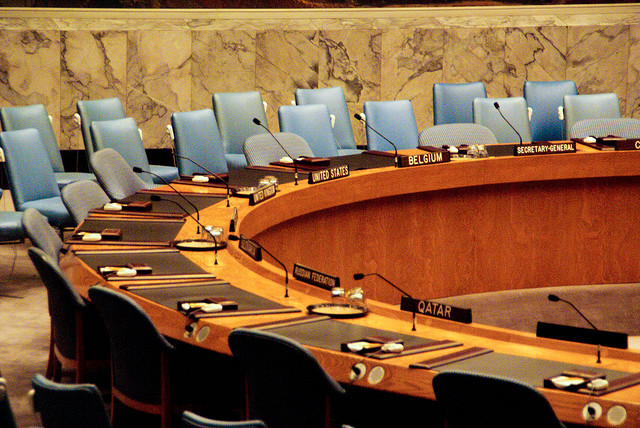 A briefing on April 27, 2016, sponsored by the anti-Israel 26-member UN “Committee on the Exercise of the Inalienable Rights of Palestinian People,” was full of anti-Israel falsehoods, and demonstrated why the U.S. should defund the U.N. and eject the U.N. from the United States.  The briefing panel featured two “Palestinian” lawyers, including one from Addameer – which claims that it is a “human rights group” but reportedly is really a front group for the Popular Front for the Liberation of Palestine – which the U.S. designates as a foreign terrorist organization (FTO).  See Dan Diker report.  The UN briefing panel libeled Israel and the Israel Defense Forces (IDF) and claimed that the “humiliations” of “occupation” such as Israeli security checkpoints, justify terrorism by Palestinian Arabs.

The obvious goal of the UN’s “Committee on the Exercise of the Inalienable Rights of the Palestinian People” and last week’s briefing panel is Israel’s complete destruction.   The UN Committee’s stated purpose is Palestinian Arab “self-determination without external interference, national independence and sovereignty; and to return to their homes and property from which they had been displaced.”  In other words, the goal is for Palestinian Arabs to exercise sovereignty over, and overrun all of Israel.  During last week’s briefing, the panelists referred to Israel’s recapture of eastern Jerusalem, Judea and Samaria in a defensive war as the “second occupation.”  (In other words, the briefing panel deemed Israel’s reestablishment in 1948 to be the “first occupation.”)  The briefing panel also demanded that UN member states take action against Israel because “you [the UN member states] created the problem.”  The phrase “you created the problem” apparently referred to various UN member states recognizing the State of Israel in 1948, and the UN’s admission of the State of Israel as a UN member in May 1949.

The obvious goal of the UN’s “Committee on the Exercise of the Inalienable Rights of the Palestinian People” and last week’s briefing panel is Israel’s complete destruction.

The panel specifically, falsely claimed that the Palestinian Arab “children” are convicted on the basis of confessions and secret files not shown to their counsel, and that Israel’s military courts system in the “occupied territories” is a discriminatory “kangaroo court,” and fails to provide “official” translators.  Even the U.S. State Department’s recent human rights report (which largely relies on false information from anti-Israel groups) recognizes that all of this is false.

“The evidentiary rules governing trials of Palestinians, and others subject to military law in the occupied territories, are the same as evidentiary rules in criminal cases.  According to the Ministry of Justice, the law does not permit convictions based solely on confessions.  The government stated that the evidentiary rules applied in military trials were the same as those applied in civilian courts and did not allow presentation of secret evidence not provided to the defendant or their counsel.  Counsel may assist the accused in such trials, and a judge may assign counsel to defendants. Indigent detainees do not automatically receive free legal counsel for military trials, but almost all detainees had counsel, even in minor cases. Court indictments were read in Hebrew and, unless the defendant waived this right, in Arabic.  Authorities translated all military court indictments into Arabic.  At least one interpreter was present for simultaneous interpretation in every military court hearing, unless the defendant waived that right. Defendants may appeal through the Military Court of Appeals and then to the Supreme Court.”

The briefing panel also complained that there has been an uptick in detentions since October 2015.   The panel failed to mention that September 2015 was the beginning of the recent wave of Palestinian terror, in which Palestinian Arab terrorists have murdered 34 innocent Israelis and injured 447 innocent Israelis in stabbing, shooting, vehicular ramming and bus bombing attacks.Instead, the panel just mentioned increased “demonstrations.”

The panel also complained that Israel was violating the UN Convention on the Rights of the Child (UNCRC) and overusing the “security” exceptions of the UNCRC.  The UNCRC may not even apply to Israel’s territories.  Moreover, even the supposed “violations” falsely alleged by the panel are not violations of the UNCRC.  For instance, the briefing panel alleged that Israel was violating the UNCRC because Israel uses soldiers who speak Arabic as translators instead of “official” translators.  However, UNCRC Article 40.2(vi) merely provides that States shall ensure that children accused of a penal violation “free assistance of an interpreter if the child cannot understand or speak the language used.”   There is no requirement of an “official” translator (whatever that means).   Providing a soldier who speaks Arabic does not violate the UNCRC.

While accusing Israel of non-existent violations of the UNCRC, the so-called “human rights” panelists had nothing to say about the fact that numerous Muslim countries (including Iran, Iraq, Jordan, Kuwait, Syria, the United Arab Emirates, Saudi Arabia, the Maldives and Mauritania) openly state that they will not follow the UNCRC when the UNCRC conflicts with Islamic (Shariah) law.  Islamic countries also specifically state that they will not abide by the UNCRC’s provision granting children freedom of religion because “allowing a child to change his or her religion runs counter to the provisions of the Islamic Shariah.”

Interestingly, when ZOA’s representative asked whether any of the panelists’ “human rights” organizations dealt with the fact that Hamas forces Palestinian Arab children to dig tunnels, and killed 160 children who were digging the tunnels (including murdering children so as not to disclose the tunnels’ location), the Addameer attorney (Sahar Francis) admitted that “it is well known that Hamas violates human rights.”  She then falsely asserted that Israel also violates human rights.  (Perhaps the admission about Hamas reflected rivalry between the two terrorist organizations, Hamas and PFLP.)

None of the panelists or UN Committee members expressed interest in recognizing and pursuing real peace with the Jewish State.   Instead, the panel and UN committee is pursing lawfare (war via courts), a propaganda war against Israel and abusive use of UN forces.   The panelists demanded that the International Criminal Court (ICC) should move forward with (false) claims against Israel; that UN member countries throughout the world should assert “universal jurisdiction” to bring (false) war crimes claims against Israel; and that the UN should send a protection force to the “OPT” (so-called “occupied Palestinian territories” – correctly known as Judea, Samaria and eastern Jerusalem) to “protect” Palestinians from Israel.  The UN Security Council will be meeting for a briefing on May 6 focusing on this Orwellian “protection force” demand.   See UN to Meet on May 6 on Protection of Palestinian Civilians (WaPo).  All this, when, in fact, it is innocent Israelis who need protection from Palestinian terrorists.

We would love to hear from you! Please fill out this form and we will get in touch with you shortly.
Trending Z
Uncategorized May 6, 2016
FLASH: ISRAEL-JORDAN PEACE TREATY (1994) GUARANTEES JEWS ACCESS TO THE TEMPLE MOUNT – LET MY PEOPLE PRAY
Uncategorized May 6, 2016
ZOA Analysis: Most American Rabbis Who Are Boycotting Some Israeli Ministers Are From Extremist Left Wing Groups (J Street; T’ruah; JVP)
Uncategorized May 6, 2016
Israel’s “Right of Return” Grandparent Clause is De-Judaizing the Jewish State – Eliminate It
Uncategorized May 6, 2016
Exclusive: ZOA Accuses Ilhan Omar of Hating the U.S. ‘as Much as Israel,’ Lauds Kevin McCarthy for ‘Throwing Her Off the HFAC’
Center for Law & Justice
We work to educate the American public and Congress about legal issues in order to advance the interests of Israel and the Jewish people.
We assist American victims of terrorism in vindicating their rights under the law, and seek to hold terrorists and sponsors of terrorism accountable for their actions.
We fight anti-Semitism and anti-Israel bias in the media and on college campuses.
We strive to enforce existing law and also to create new law in order to safeguard the rights of the Jewish people in the United States and Israel.
Our Mission
ZOA STATEMENT
The ZOA speaks out for Israel – in reports, newsletters, and other publications. In speeches in synagogues, churches, and community events, in high schools and colleges from coast to coast. In e-mail action alerts. In op-eds and letters to the editor. In radio and television appearances by ZOA leaders. Always on the front lines of pro-Israel activism, ZOA has made its mark.
Related Articles
OP-ED ZOA to Bard Univ.: Cut Ties with Anti-Semitic Al-Quds Univ.