Pittsburgh ZOA Scholarship to Israel Program
ZOA in the news

As reported by the Pittsburgh Jewish Chronicle: 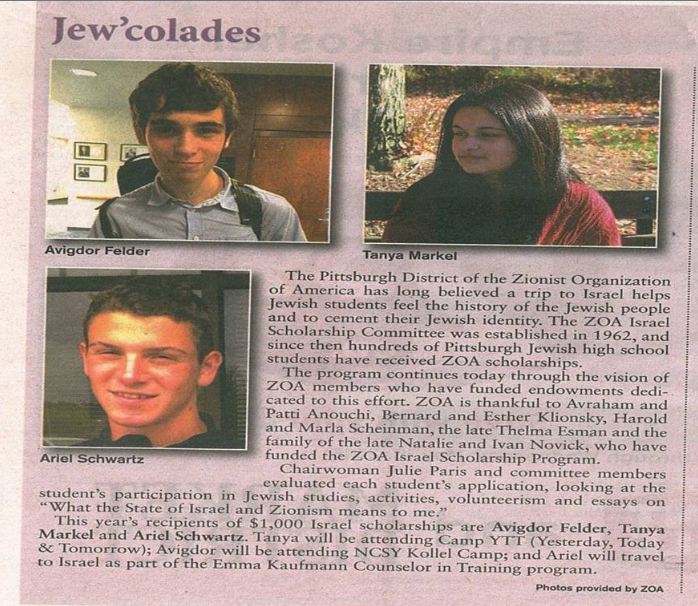 The Pittsburgh District of the Zionist Organization of America has long believed a trip to Israel helps Jewish Students feel the history of the Jewish people and to cement their Jewish identity. The ZOA Israel Scholarship Committee was established in 1962, and since then hundreds of Pittsburgh Jewish high school students have received ZOA scholarships.

The program continues today through the vision of ZOA members who have funded endowments dedicated to this effort. ZOA is thankful to Avraham and Pattu Anouchi, Bernard and Esther Klionsky, Harold and Marla Scheinman, the late Thelma Esman and the family of the late Natalie and Ivan Novick, who have funded the ZOA Israel Scholarship Program.

Chairwoman Juile Paris and committee members evaluated each student’s application, looking at the student’s participation in Jewish studies, activities, volunteerism and essays on “What the State of Israel and Zionism means to me.”

This year’s recipients of $1,000 Israel scholarships are Avigdor Felder, Tanya Markel and Ariel Schwartz. Tanya will be attending Campy YTT (Yesterday, Today, & Tomorrow); Avigdor will be attending NCSY Kollel Camp; and Ariel will travel to Israel as part of the Emma Kaufmann Counselor in Training program.

We would love to hear from you! Please fill out this form and we will get in touch with you shortly.
Trending Z
Uncategorized May 25, 2016
ZOA Analysis: Most American Rabbis Who Are Boycotting Some Israeli Ministers Are From Extremist Left Wing Groups (J Street; T’ruah; JVP)
Uncategorized May 25, 2016
ZOA: Israel’s Reasonable Judicial Reform Proposals Are Good for Democracy, the Rule of Law and the Economy
News May 25, 2016
ZOA is Disappointed, Offended and Frightened by 211 U.S. House Votes Supporting Jew-Hating, Israel-Hating Rep. Ilhan Omar
Uncategorized May 25, 2016
Israel’s “Right of Return” Grandparent Clause is De-Judaizing the Jewish State – Eliminate It
Center for Law & Justice
We work to educate the American public and Congress about legal issues in order to advance the interests of Israel and the Jewish people.
We assist American victims of terrorism in vindicating their rights under the law, and seek to hold terrorists and sponsors of terrorism accountable for their actions.
We fight anti-Semitism and anti-Israel bias in the media and on college campuses.
We strive to enforce existing law and also to create new law in order to safeguard the rights of the Jewish people in the United States and Israel.
Our Mission
ZOA STATEMENT
The ZOA speaks out for Israel – in reports, newsletters, and other publications. In speeches in synagogues, churches, and community events, in high schools and colleges from coast to coast. In e-mail action alerts. In op-eds and letters to the editor. In radio and television appearances by ZOA leaders. Always on the front lines of pro-Israel activism, ZOA has made its mark.
Connect with us
Sign up for our Newsletter