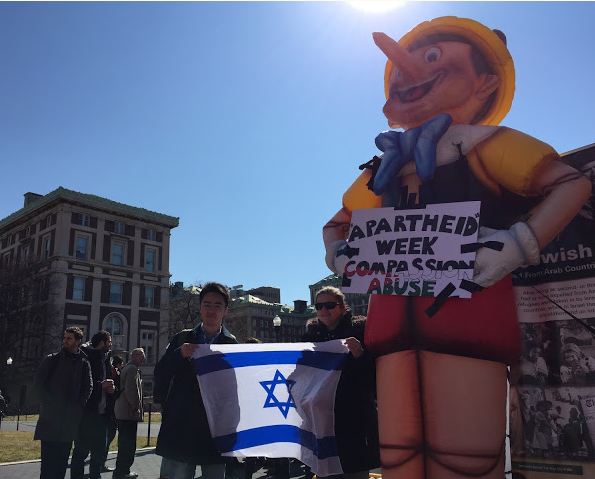 I’ve been to Israel 5 times now, and even on this trip I’m still learning and seeing new things every day. On this trip in particular, I have been paying very close attention to Israeli Arabs and their quality of life in Israel. As a campus advocate, I’m constantly exposed to the claim that Israel is an apartheid state. However, this is most definitely NOT the case; I would know better than most, especially more than SJP and BDS. My parents truly understand the meaning of apartheid, and I was raised with the stories of apartheid and their opposition to it. My parents and grandparents were born and lived in South Africa during the Apartheid regime. Apartheid- which is Afrikaans for ‘apart hood’- was the system of segregation and discrimination on the grounds of race. On their college campuses- Witwatersrand U. and UCT- they fought for the human and civil rights of black South Africans. Now, I’m fighting on my college campus for Israel- to defend my Zionism and to fight against the apartheid claim against Israel.

In apartheid era South Africa, every public space- from the streets to college campuses- became war zones. Conscientious students and the few South African civilians who actively opposed apartheid were teargassed by police; my grandparents felt (and still feel) incredibly guilty for having more privilege than their black friends; and the reason my family left South Africa before apartheid fell was because my dad and my uncles were going to be conscripted into the South African Army (along with every white male aged 16 and up) and sent into black townships like Khayelitsha and Soweto to shoot innocent black South Africans indiscriminately- men, women, and children. Coming on this trip, I have learned that not only is Israel not an apartheid state, but the claims made against Israel calling it apartheid only aims to demonize the only true democracy in the Middle East.

Let me explain the differences between the South African apartheid and the alleged “Israeli apartheid”. Arab citizens in Israel have full and equal rights. Palestinian Arabs who are not citizens of Israel still enjoy more rights living in Israel than they would in any other sovereign Arab state; on this trip, we’ve met Arab Palestinian workers who work for Israelis, and they earn 4 times more money as their starting minimum wage than they would in the Palestinian Authority. They coexist amongst their Jewish Israeli peers and enjoy their fantastic working conditions provided to them by their Jewish bosses. Additionally, the Israeli Arab population have equal voting rights equivalent to Israeli Jews and Israel’s minorities, freedom of speech, and freedom from racial discrimination and persecution. Compared to the suffering of black South Africans under real apartheid, the Israeli Arab citizens enjoy equal rights to their Jewish peers, hold office in the Knesset, and live and work in comfort and security. That doesn’t sound like apartheid to me.

The ZOA campus leadership trip to Israel has given me the opportunity to further develop my understanding of the situation on the ground in Israel. Seeing and knowing the differences between South African apartheid and the propaganda-fueled claim of Israeli apartheid have inspired me to continue my advocacy on campus in the United States and correct the factually incorrect presumption of Israeli apartheid.

We would love to hear from you! Please fill out this form and we will get in touch with you shortly.
Trending Z
News July 5, 2016
ZOA Condemns U.S. State Dept. & U.S. Amb. Nides For Siding with Antisemitic, Discriminatory Palestinian & Hamas Terrorists re: the Temple Mount, Violating Jews’ Religious Freedom
News July 5, 2016
ZOA’s Klein JPost Op-Ed: There is Nothing Extreme About Israel’s New Government
Uncategorized July 5, 2016
FLASH: ISRAEL-JORDAN PEACE TREATY (1994) GUARANTEES JEWS ACCESS TO THE TEMPLE MOUNT – LET MY PEOPLE PRAY
Uncategorized July 5, 2016
ZOA Analysis: Most American Rabbis Who Are Boycotting Some Israeli Ministers Are From Extremist Left Wing Groups (J Street; T’ruah; JVP)
Center for Law & Justice
We work to educate the American public and Congress about legal issues in order to advance the interests of Israel and the Jewish people.
We assist American victims of terrorism in vindicating their rights under the law, and seek to hold terrorists and sponsors of terrorism accountable for their actions.
We fight anti-Semitism and anti-Israel bias in the media and on college campuses.
We strive to enforce existing law and also to create new law in order to safeguard the rights of the Jewish people in the United States and Israel.
Our Mission
ZOA STATEMENT
The ZOA speaks out for Israel – in reports, newsletters, and other publications. In speeches in synagogues, churches, and community events, in high schools and colleges from coast to coast. In e-mail action alerts. In op-eds and letters to the editor. In radio and television appearances by ZOA leaders. Always on the front lines of pro-Israel activism, ZOA has made its mark.
Connect with us
Sign up for our Newsletter