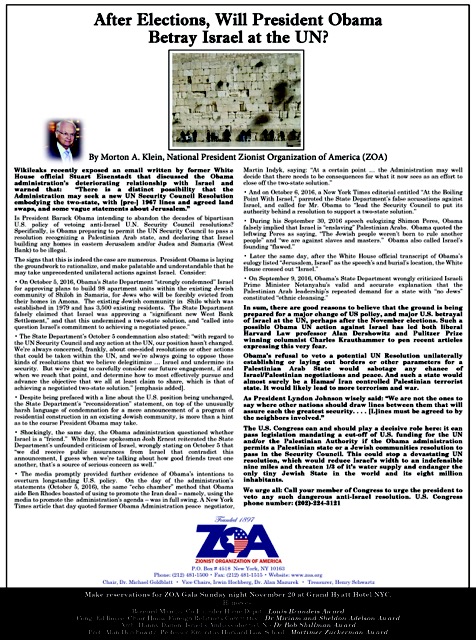 Wikileaks recently exposed an email written by former White House official Stuart Eisenstadt that discussed the Obama administration’s deteriorating relationship with Israel and warned that: “There is a distinct possibility that the Administration may seek a UN Security Council Resolution embodying the two-state, with [pre-] 1967 lines and agreed land swaps, and some vague statements about Jerusalem.”

Is President Barack Obama intending to abandon the decades of bipartisan U.S. policy of vetoing anti-Israel U.N. Security Council resolutions? Specifically, is Obama preparing to permit the UN Security Council to pass a resolution recognizing a Palestinian Arab state and declaring that Israel building any homes in eastern Jerusalem and/or Judea and Samaria (West Bank) to be illegal?

The signs that this is indeed the case are numerous. President Obama is laying the groundwork to rationalize, and make palatable and understandable that he may take unprecedented unilateral actions against Israel. Consider:

• On October 5, 2016, Obama’s State Department “strongly condemned” Israel for approving plans to build 98 apartment units within the existing Jewish community of Shiloh in Samaria, for Jews who will be forcibly evicted from their homes in Amona. The existing Jewish community in Shilo was established in 1979 and has 3500 existing residents. The State Department falsely claimed that Israel was approving a “significant new West Bank Settlement,” and that this undermined a two-state solution, and called into question Israel’s commitment to achieving a negotiate peace.”

• The State Department’s October 5 condemnation also stated: “with regard to the UN Security Council and and any action at the UN, our position hasn’t changed. We’re always concerned, frankly, about one-sided resolutions or other actions that could be taken within the UN, and we’re always going to oppose those kinds of resolutions that we believe delegitimize … Israel and undermine its security. But we’re going to carefully consider our future engagement, if and when we reach that point, and determine how to most effectively pursue and advance the objective that we all at least claim to share, which is that of achieving a negotiated two-state solution.” [emphasis added].

“We urge all: Call your member of Congress to urge the president to veto any such dangerous anti-Israel resolution. U.S. Congress phone number: (202) 224-3121.

• Despite being prefaced with a line about the U.S. position being unchanged, the State Department’s “reconsideration” statement, on top of the unusually harsh language of condemnation for a mere announcement of a program of residential construction in an existing Jewish community, is more than a hint as to the course President Obama may take.

• Shockingly, the same day, the Obama administration questioned whether Israel is a “friend.” White House spokesman Josh Earnest reiterated the State Department’s unfounded criticism of Israel, wrongly stating on October 5 that “we did receive public assurances from Israel that contradict this announcement, I guess we’re talking about how good friends treat one another, that’s a source of serious concern as well.”

• The media promptly provided further evidence of Obama’s intentions to overturn longstanding U.S. policy. On the day of the administration’s statements (October 5, 2016), the same “echo chamber”‘ method that Obama aide Ben Rhodes boasted of using to promote the Iran deal – namely, using the media to promote the administration’s agenda – was in full swing. A New York Times article that day quoted former Obama administration peace negotiator, Martin Indyk, saying: “At a certain point… the Administration may well decide that there needs to be consequences for what it now sees as an effort to close off the two-state solution.”

• And on October 6, 2016, a New York Times editorial entitled “At the Boiling Point With Israel,” parroted the State Department’s false accusations against Israel, and called for Mr. Obama to “lead the Security Council to put its authority behind a resolution to support a two-state solution.”

• During his September 30, 2016 speech eulogizing Shimon Peres, Obama falsely implied that Israel is “enslaving” Palestinian Arabs. Obama quoted the leftwing Peres as saying, “The Jewish people weren’t born to rule another people” and “we are against slaves and masters.” Obama also called Israel’s founding “flawed.”

• Later the same day, after the White House official transcript of Obama’s eulogy listed “Jerusalem, Israel” as the speech’s and burial’s location, the White House crossed out “Israel.”

In sum, there are good reasons to believe that the ground is being prepared for a major change of U.S. policy, and major U.S. betrayal of Israel at the UN, perhaps after the November elections. Such a possible Obama UN action against Israel has led both liberal Harvard Law professor Alan Dershowitz and Pulitzer Prize winning columnist Charles Krauthammer to pen recent articles expressing this very fear.

Obama’s refusal to veto a potential UN Resolution unilaterally establishing or laying out borders or other parameters for a Palestinian Arab state would sabotage any chance of Israel/Palestinian negotiations and peace. And such a state would almost surely be a Hamas/Iran controlled Palestinian terrorist state. It would likely lead to more terrorism and war.

As President Lyndon Johnson wisely said: “We are not the ones to say where other nations should draw lines between them that will assure the greatest security… [L]ines must be agreed by the neighbors involved.”

The U.S. Congress can and should play a decisive role here: it can pass legislation mandating a cut-off of U.S. funding for the UN and/or Palestinian Authority if the Obama administration permits a Palestinian state or a Jewish communities resolution to pass in the Security Council. This could stop a devastating UN resolution, which would reduce Israel’s width to an indefensible nine miles and threaten 1/3 or it’s water supply and endanger the only tiny Jewish State in the world and its eight million inhabitants.

We urge all: Call your member of Congress to urge the president to veto any such dangerous anti-Israel resolution. U.S. Congress phone number: (202) 224-3121.

We would love to hear from you! Please fill out this form and we will get in touch with you shortly.
Trending Z
News November 3, 2016
ZOA Condemns U.S. State Dept. & U.S. Amb. Nides For Siding with Antisemitic, Discriminatory Palestinian & Hamas Terrorists re: the Temple Mount, Violating Jews’ Religious Freedom
News November 3, 2016
ZOA’s Klein JPost Op-Ed: There is Nothing Extreme About Israel’s New Government
Uncategorized November 3, 2016
FLASH: ISRAEL-JORDAN PEACE TREATY (1994) GUARANTEES JEWS ACCESS TO THE TEMPLE MOUNT – LET MY PEOPLE PRAY
Uncategorized November 3, 2016
ZOA Analysis: Most American Rabbis Who Are Boycotting Some Israeli Ministers Are From Extremist Left Wing Groups (J Street; T’ruah; JVP)
Center for Law & Justice
We work to educate the American public and Congress about legal issues in order to advance the interests of Israel and the Jewish people.
We assist American victims of terrorism in vindicating their rights under the law, and seek to hold terrorists and sponsors of terrorism accountable for their actions.
We fight anti-Semitism and anti-Israel bias in the media and on college campuses.
We strive to enforce existing law and also to create new law in order to safeguard the rights of the Jewish people in the United States and Israel.
Our Mission
ZOA STATEMENT
The ZOA speaks out for Israel – in reports, newsletters, and other publications. In speeches in synagogues, churches, and community events, in high schools and colleges from coast to coast. In e-mail action alerts. In op-eds and letters to the editor. In radio and television appearances by ZOA leaders. Always on the front lines of pro-Israel activism, ZOA has made its mark.
Related Articles
OP-ED BY: ZOA Staff ZOA Condemns Kerry For Supporting Iran’s Outrageous Demands Despite Violations