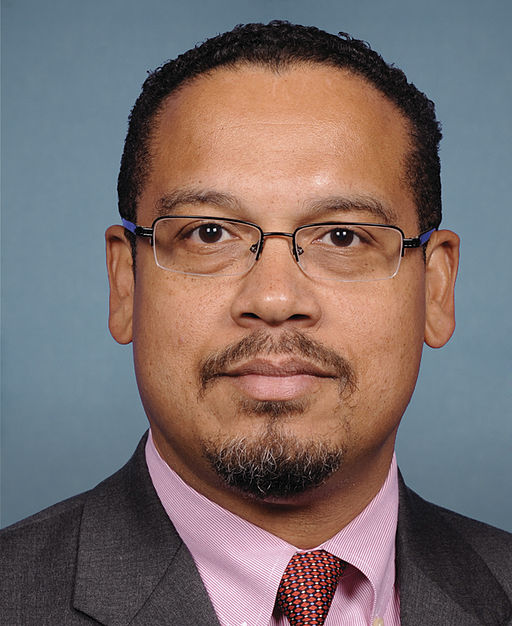 ZOA Strongly criticizes ADL for praising the anti-Semitic Cong. Keith Ellison, a leading candidate for the Democratic National Committee Chair – despite the volumes of evidence about Ellison’s longstanding record of Israel-bashing and anti-Semitism.

Appallingly, ADL head Jonathan Greenblatt (on twitter) characterized Ellison as an “important ally in the fight against anti-Semitism” and “on record in support of Israel.”

Last week ZOA published a release, urging that Ellison should not be appointed to head the DNC. Ellison’s dangerous positions, involvements and anti-Israel Congressional initiatives have included the following:

…the ADL is falsely praising Ellison now – when an important leadership post of the Democratic party is at risk of falling into the hands of someone with a longstanding record of anti-Semitic, anti-Israel activities.

This past summer, Ellison (a/k/a Keith X. Ellison a/k/a Keith Hakim a/k/a Keith Ellison Muhammed) worked to insert anti-Israel positions and language into the 2016 Democratic national platform, and to keep pro-Israel planks out of the platform.   Ellison complained in a DemocracyNow! Interview that the Israeli “occupation” was to blame for a “humanitarian crisis” and lack of sewage processing in Gaza – while ignoring that Israel withdrew from every inch of Gaza, and that Hamas diverts the electricity needed to operate Gaza’s sewage treatment plant to Hamas’s terrorist tunnels and operations.

Also in 2016, Ellison tweeted a sign falsely accusing Israel of expropriation and “apartheid.”  And in September 2016, Ellison defended the Islamic Society of North America (ISNA) on the House floor.  ISNA is an unindicted co-conspirator in the Holy Land Foundation case, involved in funneling money to Hamas.

In 2015, Ellison co-authored and spearheaded a letter (and obtained signatures on the letter of 23 Democratic Congresspersons) demanding that Prime Minister Benjamin Netanyahu’s speech to Congress about the Iran deal must be delayed until after the sanctions deadline – when the visit would have been useless.

In 2014, Ellison was one of only 8 Congresspersons who voted against the bi-partisan bill to provide $225 million to Israel’s “Iron dome” missile system.

In 2010, Ellison spearheaded and convinced 53 other Democratic Congresspersons to sign his infamous “Gaza 54” letter to President Obama, which falsely accused Israel of humiliating and wreaking “collective punishment” on Gaza residents and demanded that President Obama should pressure Israel to lift the Gaza blockade – thereby enabling Hamas to obtain more weapons to kill and terrorize innocent Israeli civilians.

In a 2010 DemocracyNow! Interview, Ellison also argued that the U.S. should not kill a leading terrorist located in Yemen, who was responsible for numerous deaths of Americans and was continuing to foment some of the worst terror attacks on Americans, because the terrorist would consider his own death to be a “reward.”

Ellison also spoke at Council on American-Islamic Relations (CAIR) dinners, and defended CAIR on the House floor.   Materials handed out at CAIR’s 2008 dinner (where Ellison spoke) called America a terrorist organization, and called for the destruction of Israel and the United States.  CAIR is an unindicted co-conspirator in the Holy Land Foundation case, involved in funneling money to Hamas.

In 2007, Ellison analogized President Bush’s prosecution of the war on terror after 9/11 to Hitler’s rise to power and activities after the Reichstag German Parliament Building fire.

From approximately 1989 until at least 1998, Ellison was an active leader in Louis Farrakhan’s anti-Semitic Nation of Islam.  Ellison raised funds and led anti-police chants to support cop-killers; co-sponsored a vicious anti-Semitic speech by Kwame Ture (Stokely Carmichael), entitled “Zionism: Imperialism, White Supremacy or Both?” while ignoring Jewish law students’ pleas to Ellison not to sponsor the speech; and spoke at a public hearing on behalf of the Nation of Islam in support of a woman alleged to have said “Jews are among the most racist white people I know.”   In 1995, Ellison organized a rally featuring Khalid Abdul Muhammed saying “if words were swords, the chests of Jews, gays and whites would be pierced.”

Back in 2007, the ADL criticized Ellison’s analogy of President Bush to Hitler.

However, the ADL is falsely praising Ellison now – when an important leadership post of the Democratic party is at risk of falling into the hands of someone with a longstanding record of anti-Semitic, anti-Israel activities.  Instead of calling out the real danger, the ADL has been condemning President-elect Trump’s appointee Stephen Bannon as an anti-Semite; but recently retracted that false, baseless claim.

ADL’s failure to soundly condemn Ellison’s overwhelming record of anti-Israel and anti-Semitic activities displays rank partisanship, and is an abdication of the ADL’s stated mission of combating anti-Semitism.

The ZOA thus again urges the ADL to join us in speaking out against appointing Ellison to the extraordinarily powerful position of head of the DNC.

Morton A. Klein is the President of the Zionist Organization of America.

We would love to hear from you! Please fill out this form and we will get in touch with you shortly.
Trending Z
News November 23, 2016
ZOA Condemns U.S. State Dept. & U.S. Amb. Nides For Siding with Antisemitic, Discriminatory Palestinian & Hamas Terrorists re: the Temple Mount, Violating Jews’ Religious Freedom
Uncategorized November 23, 2016
FLASH: ISRAEL-JORDAN PEACE TREATY (1994) GUARANTEES JEWS ACCESS TO THE TEMPLE MOUNT – LET MY PEOPLE PRAY
Uncategorized November 23, 2016
ZOA Analysis: Most American Rabbis Who Are Boycotting Some Israeli Ministers Are From Extremist Left Wing Groups (J Street; T’ruah; JVP)
Uncategorized November 23, 2016
Israel’s “Right of Return” Grandparent Clause is De-Judaizing the Jewish State – Eliminate It
Center for Law & Justice
We work to educate the American public and Congress about legal issues in order to advance the interests of Israel and the Jewish people.
We assist American victims of terrorism in vindicating their rights under the law, and seek to hold terrorists and sponsors of terrorism accountable for their actions.
We fight anti-Semitism and anti-Israel bias in the media and on college campuses.
We strive to enforce existing law and also to create new law in order to safeguard the rights of the Jewish people in the United States and Israel.
Our Mission
ZOA STATEMENT
The ZOA speaks out for Israel – in reports, newsletters, and other publications. In speeches in synagogues, churches, and community events, in high schools and colleges from coast to coast. In e-mail action alerts. In op-eds and letters to the editor. In radio and television appearances by ZOA leaders. Always on the front lines of pro-Israel activism, ZOA has made its mark.
Connect with us
Sign up for our Newsletter