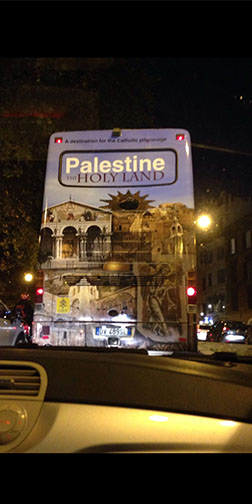 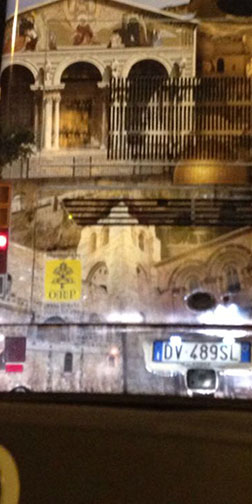 Close up of ORP Sticker on Bus (Opera Romana Pellegrinaggi)

Who is behind the bus ads in Rome for a ‘trip to Palestine?’

Is the Vatican’s travel agency involved in the “Palestine trip” bus ads whose itinerary includes Jerusalem sites holy to Christians?

On November 23rd, I exposed the story of a bus in Rome, used by the Vatican travel agency to sponsor a trip to “Palestine” whose itinerary as advertised included visits to iconic Christian sites – except that they are in Israel’s capital city of Jerusalem. Israel does not appear in the ads.

A few days later, the head of the Zionist Organization of America. Morton Klein, demanded that the Vatican end its promotion of pilgrimages to Christian sites in “Palestine” and its “erasing Israel from the picture” even though visits include those iconic sites in Jerusalem. “The ZOA regards this a sinister reiteration of Catholic replacement theology, whereby Jews and Judaism are theologically dismissed from history”, the ZOA said in a statement. “We urge the Vatican to cease organizing and promoting tours to Israel that do not name the country, do not refer to its Jewish history and which shun contacts with the country of its ‘elder brothers.’”

Later on, probably after receiving a response, the ZOA seemed to retract the story, writing that “it now seems that the Vatican travel office does not organize tours of Christian sites; they are operated by private contractors.”

Private contractors? Those who addressed the ZOA may have relied on English speakers’ lack of knowledge. Look again.

From the photos accompanying this article, readers can clearly see the yellow logo in the bus. It says “ORP”. It is Opera Romana Pellegrinaggi.

This is not a “private contractor”, but the Vatican pilgrimage office and the official travel organization backed by the Holy See. Readers can go on their official website and read what they say: “Opera Romana Pellegrinaggi is an office of the vicariate of Rome, an office of the Holy See, reporting directly to the Cardinal Vicar of the Pope”.

The travel office’s charter appears on the Vatican website. The Catholic News Agency calls it “the Vatican body that oversees all pilgrim activity”.This is not a “private contractor”, but the Vatican pilgrimage office and the official travel organization backed by the Holy See. Readers can go on their official website and read what they say: “Opera Romana Pellegrinaggi is an office of the vicariate of Rome, an office of the Holy See, reporting directly to the Cardinal Vicar of the Pope”.

Here is what the Wall Street Journal says: “The ORP was founded in 1934 to organize trips for Vatican officials and groups of Italian Catholics to the Holy Land and other pilgrimage sites. The office shot to prominence after the election of John Paul II in 1978. When John Paul took the papacy on the road, ORP became the primary coordinator of his entourage”. The Journal calls Opera Romana Pellegrinaggi “the Pope’s travel agent”.

So there are only two alternatives: Either the Vatican’s travel agency took the decision to call Israel “Palestine” without the Holy See’s approval and its symbol was used without authorization to advertise these trips, or what I wrote is more than correct.

Tertium not datur. No third possibility is given.

We would love to hear from you! Please fill out this form and we will get in touch with you shortly.
Trending Z
Uncategorized December 2, 2016
ZOA Analysis: Most American Rabbis Who Are Boycotting Some Israeli Ministers Are From Extremist Left Wing Groups (J Street; T’ruah; JVP)
Uncategorized December 2, 2016
ZOA: Israel’s Reasonable Judicial Reform Proposals Are Good for Democracy, the Rule of Law and the Economy
News December 2, 2016
ZOA is Disappointed, Offended and Frightened by 211 U.S. House Votes Supporting Jew-Hating, Israel-Hating Rep. Ilhan Omar
Uncategorized December 2, 2016
Israel’s “Right of Return” Grandparent Clause is De-Judaizing the Jewish State – Eliminate It
Center for Law & Justice
We work to educate the American public and Congress about legal issues in order to advance the interests of Israel and the Jewish people.
We assist American victims of terrorism in vindicating their rights under the law, and seek to hold terrorists and sponsors of terrorism accountable for their actions.
We fight anti-Semitism and anti-Israel bias in the media and on college campuses.
We strive to enforce existing law and also to create new law in order to safeguard the rights of the Jewish people in the United States and Israel.
Our Mission
ZOA STATEMENT
The ZOA speaks out for Israel – in reports, newsletters, and other publications. In speeches in synagogues, churches, and community events, in high schools and colleges from coast to coast. In e-mail action alerts. In op-eds and letters to the editor. In radio and television appearances by ZOA leaders. Always on the front lines of pro-Israel activism, ZOA has made its mark.
Connect with us
Sign up for our Newsletter