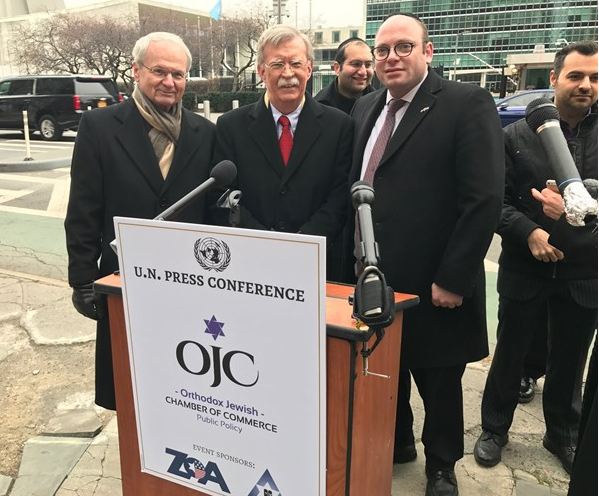 Morton A. Klein, Amb. John Bolton, and president of OJC at press conference 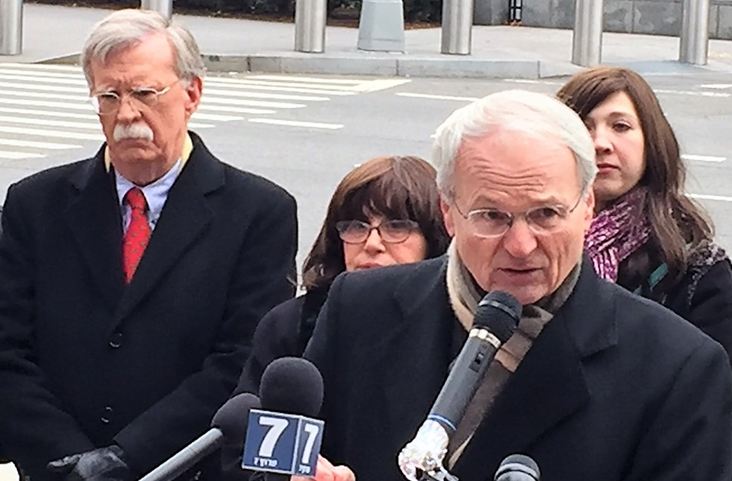 In an interview with Dr. Joseph Frager, Zionist Organization of America (ZOA) President Morton Klein explains why he is concerned about US President Barack Obama’s potential to make dangerous and irrevocable decisions concerning the Palestinian Authority, Israel, and BDS.

“I’m deeply distressed that none of the major Jewish organizations has taken a public stand on this, is making a serious noise about this extraordinary danger. They’re nowhere to be heard from. We have a delegation coming from the Palestinian Authority to meet with Obama, to meet with Kerry, to try to promote establishing unilaterally a Palestinian terrorist state, a Hamas-Iran terrorist state, and to declare the Jews who live in Judea and Samaria and eastern Jerusalem illegal. Which means immediately that would make BDS legal. Because if these people are living there illegally, then you can boycott them because they’re not there under international law,” Klein explained.

“My colleagues in the organizational world, they told me not to worry, its not going to happen, when in fact there’s all sorts of indications it will. This is all orchestrated, it’s not something that happens at will. When Samantha Power, the ambassador to the UN and John Kerry was [sic] asked, ‘Will you veto these types of resolutions?’ they refused to answer. That’s what you need to know,” he concluded…

[Bolton described the US policy on “peace in the Middle East” as being “bipartisan” and requiring both sides to directly discuss a solution agreeable to both of them. He also said any attempt on the part of non-locals to force an agreement on the two sides would likely backfire, making peace less likely and more difficult to achieve.

“We’ve got a president here who sadly has the worst governmental to governmental relationship with the state of Israel since the modern state was created in 1948,” Bolton said. “Right now we’ve got a president in the post election period before his term is up who faces no political consequences and who could well take steps that violate this 50 year bipartisan agreement that its not for the us or anyone to impose what the final peace terms will be between Israel and the other parties in the Middle East.”

He also encouraged Obama to vote against the new anti-Israel resolutions being drafted in the UN, and not fall into the trap of abstaining or voting in favor.

“Voting for these resolutions…its something we urge the president not to undertake. There are those out there who want to destroy the state of Israel and harm American interest in the region… I take this to be a real and palpable danger, not one that’s gotten the coverage it deserves,” he continued. “We want to underline here today…[people from] various different perspectives fear this outcome. We want to alert people to the threat that we’re facing, and urge everybody who values the only functioning democracy in the middle east, who values the US Israel relationship, who values the importance of peace and security in that critical region of the world, to let the president know we want him to uphold fifty years of bipartisan foreign policy and not deviate from it in the closing days of his presidency.”] (See, ‘Bolton to Obama: Don’t support anti-Israel resolutions, ‘ by Eliran Aharon, Israel National News, Dec. 12, 2016).

Explaining his own concerns, Frager said, “We are concerned, very concerned, that he [Obama] is going to do something that is a unilateral move against Israel. The reason we believe that – it’s not only I, [many others have] all written about this – we’re concerned that he is so focused on creating a PLO state that he will go to any lengths. We’re concerned he’s being pushed by people to do something no other president has ever done in the waiting days of his tenure.”

When asked if he thought Obama was trying to get revenge on Israel, Frager said, “I don’t want to call it revenge, but I would say he’s so frustrated… We’re concerned that he’s going to make a rash move, to do something that he should not do, to do something no other president of the US has done. We may have a great deal of fear and it may be unfounded, but my feeling is that we are very concerned, there’s enough indications, enough smart people have raised this issue and I believe if they’re raising this issue then there is a concern.”

“The whole Democratic party could also be affected…You have a lot of friends of Israel in the Democratic party. You make a rash decision…you’re affecting a lot of good Democrats who support Israel tremendously would not agree with this [sic], and would want a negotiated peace…

“I feel [the next presidency] it’s going to be much better for Israel than ever before, I feel that President-elect Trump has a lot of great instincts and a lot of intimate details on Israel. In terms of Israel, he’s well aware of all the difficulties…I think he’s going to deal with them in a fashion that Israel can certainly feel more at ease and with a warmer alliance a warmer relationship with America.”

We would love to hear from you! Please fill out this form and we will get in touch with you shortly.
Trending Z
News December 12, 2016
New Biden Nominees Opposed Abraham Accords & Involved in Israeli Election Interference
Uncategorized December 12, 2016
ZOA Letter to DOJ & FBI on New “Mapping Project” Antisemitic Threat by ZOA Pres. Morton Klein, Dir. of Research/Special Projects Liz Berney, Esq., Dir. Center for Law & Justice Susan Tuchman, Esq.
News December 12, 2016
ZOA’s Condemnation of Black Lives Matter Defended by JNS’ Tobin: Jews Supporting BLM Empowered Antisemitism
Op-Ed December 12, 2016
ZOA’s Mort Klein JPost Op-Ed: BDS Mapping Project Targets Every Jew, Including Left Wing, Israelophobic Jews
Center for Law & Justice
We work to educate the American public and Congress about legal issues in order to advance the interests of Israel and the Jewish people.
We assist American victims of terrorism in vindicating their rights under the law, and seek to hold terrorists and sponsors of terrorism accountable for their actions.
We fight anti-Semitism and anti-Israel bias in the media and on college campuses.
We strive to enforce existing law and also to create new law in order to safeguard the rights of the Jewish people in the United States and Israel.
Our Mission
ZOA STATEMENT
The ZOA speaks out for Israel – in reports, newsletters, and other publications. In speeches in synagogues, churches, and community events, in high schools and colleges from coast to coast. In e-mail action alerts. In op-eds and letters to the editor. In radio and television appearances by ZOA leaders. Always on the front lines of pro-Israel activism, ZOA has made its mark.
Connect with us
Sign up for our Newsletter