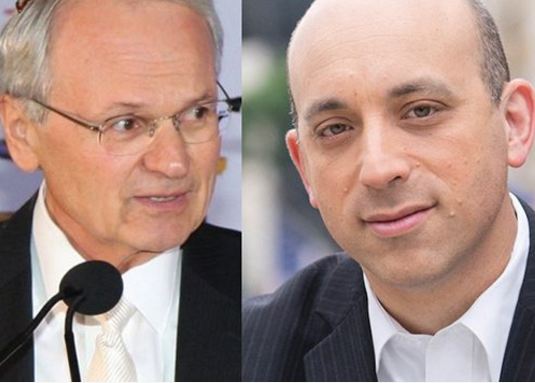 The Trump effect already has transformed the organized Jewish community from A to Z — literally.

That is, it has changed who’s in and who’s out in terms of White House preference, from the ADL (Anti-Defamation League), a legacy institution now more in the role of outsider given its feisty readiness to openly criticize the president’s policies, to the ZOA (Zionist Organization of America), which in recent weeks has moved from the communal wilderness on Israel issues to best reflect the emerging views of the new administration on the Mideast.

In fact, ZOA is to the Trump White House what J Street was to the Obama White House: the go-to Jewish organization on Israel.

Quite a dramatic shift.

Until recently, neither of the professional heads of these two venerable Jewish institutions — the ZOA was founded in 1897, the ADL in 1913 — was a household name for most American Jews. Jonathan Greenblatt, the CEO and national director of the ADL, and Morton Klein, the national director of the ZOA, make as sharp a contrast in style and perspective as one could imagine, underscoring the deep divisions in our community over key issues ranging from combatting anti-Semitism to ensuring a secure Israel.

Not surprisingly, there is no love lost between them.

Klein has publicly slammed Greenblatt and the ADL for sharply criticizing President Trump’s appointment of Steve Bannon as chief White House strategist; not being tough enough on Black Lives Matter; initially speaking favorably of Rep. Keith Ellison, the Muslim-American candidate to head the Democratic National Committee; opposing the Trump ban on Muslim immigrants; and for Greenblatt’s appearance at a J Street conference.

Greenblatt’s policy is not to publicly criticize his peers, and blunt, open criticism by one national Jewish leader of another is rare. Klein takes a certain pride, though, in being a lone wolf. He says his track record over more than two decades in opposing the views of mainstream Jewish organizations speaks for itself.

Klein and Donald Trump seem to share a similar worldview: the good guys are under siege, too often ready to give in rather than toughen up. The key is to buck the establishment, be more aggressive and put your enemies on the defensive.

‘It’s painful for me to criticize other Jewish organizations, but I feel I have a duty to pressure them to do the right thing,” he told me this week.

“I wish other Jewish groups had told [Rabbi] Stephen Wise” to criticize his friend FDR for the president’s passive attitude toward saving European Jewry during World War II.

“I am almost the only leader to assess the [Mideast] situation correctly,” Klein continued. “ZOA and I were the only ones to predict everything: the failure of Oslo, [the false promises of] Arafat, the missiles [that Israel would endure in return for evacuating Gaza].”

Klein is still odd-man-out among his peers in mainstream Jewish organizations. He is an outspoken advocate of Bannon, asserting the Trump strategist is as “philo-Semitic and deeply supportive of Israel as anyone I’ve ever known working in the White House.” Klein is opposed to the two-state solution and in favor of increased settlement building in the West Bank, and he supports Trump’s immigration ban.

Only now, his views are in sync with the White House, and his major supporter, billionaire Sheldon Adelson, is among the president’s inner circle.

Despite the new element of caution that Trump appears to be taking on moving the U.S. Embassy from Tel Aviv to Jerusalem and in mildly criticizing settlements, Klein says he is certain the president will make good on his campaign promises to move the embassy and support future settlement building.

A Philadelphia-based statistician and economist for the government, Klein rose out of nowhere to become president of ZOA in 1994. For the first six years, his was a volunteer post, but since then he has drawn a salary as chief executive of the group, whose membership numbers “20,000, counting children,” Klein said. He pointed out in an interview this week that he’s been elected “every two to four years,” though he only once faced opposition.

Even his strongest critics acknowledge that Klein, who inherited a bankrupt ZOA, is a tireless fundraiser and advocate for his cause. And even his defenders admit that his insistent style can be exasperating. Fellow members of the Conference of Presidents of Major American Jewish Organizations are known to roll their eyes when Klein gets up to challenge guest U.S. officials or other dignitaries with sharp questions about Mideast policy.

“We were considered right wing for opposing Oslo and Arafat,” Klein said of ZOA, “but to tell the truth, I consider myself a rational centrist. And I wish other Jewish organizations, like AJC and the ADL, would become as animated and upset at the PA [Palestinian Authority], which promotes murder and refuses to negotiate [with Israel], as they are about the settlements.

“I think they mean well,” he said of his peers, “but [their position] stems not from principle but from fear of Muslims and other non-Jews who hate us,” he asserted. “It may be subconscious, but they are frightened Jews trying to appease those who hate us.”

Klein and Donald Trump seem to share a similar worldview: the good guys are under siege, too often ready to give in rather than toughen up. The key is to buck the establishment, be more aggressive and put your enemies on the defensive.

So to Klein, a national Jewish leader like the ADL’s Greenblatt, with his emphasis on engaging American Muslims, blacks and other minorities, represents precisely the wrong way to respond to a world in chaos.

But for many Jews opposed to and fearful of Trump’s actions, Greenblatt is an emerging hero, praised for being at the vanguard of mainstream Jewish leaders in being willing to confront Trump’s policies head-on.

He has come a long way in a short time on the national Jewish scene.

Succeeding the iconic Abraham Foxman, a veteran of five decades at the ADL, in 2015, he is 30 years younger than his predecessor. With an intense but low-key persona, Greenblatt has had a varied and impressive background as a successful social entrepreneur, university faculty member and corporate executive before heading up the office of social innovation and civic participation in the Obama White House.

Foxman, a child survivor of the Holocaust, was a beloved figure to several generations of ADL supporters for his warm, down-to-earth manner, shoot-from-the-kishkas style and deep commitment to Israel.

But the lay leadership recognized that in order to maintain the group’s prominence, “we needed to be relevant to the next generation,” Barry Curtiss-Lusher, a Denver businessman and immediate former national chairman, told me recently. He played a key role in bringing Greenblatt to ADL, convinced that his skill set and outlook would engage millennials and other younger Jews perceived to be less emotionally attached to Israel and more deeply committed to a wide array of social causes.

“Jonathan’s is a new voice, but he is speaking with an ADL voice,” Curtiss-Lusher said, noting that the non-partisan organization has always had a dual mission to fight anti-Semitism and other forms of bigotry, and to partner, when possible, with other minority groups.

“Our job is to speak out when we see potential harm to the community,” he said, even if it sometimes means disagreeing with a president. “We put a premium on access, but we don’t believe the ends justify the means.”

As for results, “we’re engaging the next generation, big time,” Curtiss-Lusher said. “We had 25,000 new contributions to ADL in the last two months.”

Much of that support is believed to be coming from younger Jews whose more universalist outlook is in sync with several positions Greenblatt has taken. He received loud applause at a major ADL conference on anti-Semitism in December when he announced that if the administration starts registering Muslims, he will register as a Muslim in solidarity. And he was the first mainstream Jewish organizational leader to blast Trump’s appointment of Bannon.

In an interview, Greenblatt noted that in these turbulent times it’s difficult to navigate between engaging with the new administration and working with other groups to oppose the president on positions that seem inconsistent with ethical values.

“I believe that we’re stronger when we work together,” he said, citing an African proverb that you run faster alone but farther if you run with others. For Greenblatt it’s part principle, part pragmatism. “At best we Jews are 3 percent of the American population,” he said. “We punch above our weight, but I believe that the only way we can engage the other 97 percent effectively is through partnerships with others who have shared interests.”

He attributes the dramatic increase in donations for his organization of late to being “true to our ADL heritage, speaking truth to power. We were strong. We showed up. We didn’t straddle. We were principled, not political.”

The great majority of American Jews, who are in the liberal camp, identify with Greenblatt’s criticism of Bannon’s influence in the White House, the executive order on immigration and the Israeli Knesset’s vote last week to legalize all West Bank outposts.

But Klein’s praise of Bannon, support for curtailing U.S. immigration and call for a greater Jewish presence in Judea and Samaria (the biblical terms for the West Bank) increase his status with the White House.

The fact that the ADL and ZOA leaders’ views are so diametrically opposed, and are each attracting greater attention, speaks to the rift within the Jewish community that seems to be growing deeper. This week’s love-in between Israeli Prime Minister Netanyahu and President Trump at the White House could tip the scales one way or the other.

U.S. Jews may be greatly relieved to see the U.S. and Israel on the same page, after eight years of deep tension, or deeply disturbed to find the leaders of both countries in sync, under strong criticism for perceived cracks in their democracies.

This article was published by the Jewish Week and may be found here.

We would love to hear from you! Please fill out this form and we will get in touch with you shortly.
Trending Z
Uncategorized February 17, 2017
ZOA Analysis: Most American Rabbis Who Are Boycotting Some Israeli Ministers Are From Extremist Left Wing Groups (J Street; T’ruah; JVP)
Uncategorized February 17, 2017
ZOA: Israel’s Reasonable Judicial Reform Proposals Are Good for Democracy, the Rule of Law and the Economy
News February 17, 2017
ZOA is Disappointed, Offended and Frightened by 211 U.S. House Votes Supporting Jew-Hating, Israel-Hating Rep. Ilhan Omar
Uncategorized February 17, 2017
Israel’s “Right of Return” Grandparent Clause is De-Judaizing the Jewish State – Eliminate It
Center for Law & Justice
We work to educate the American public and Congress about legal issues in order to advance the interests of Israel and the Jewish people.
We assist American victims of terrorism in vindicating their rights under the law, and seek to hold terrorists and sponsors of terrorism accountable for their actions.
We fight anti-Semitism and anti-Israel bias in the media and on college campuses.
We strive to enforce existing law and also to create new law in order to safeguard the rights of the Jewish people in the United States and Israel.
Our Mission
ZOA STATEMENT
The ZOA speaks out for Israel – in reports, newsletters, and other publications. In speeches in synagogues, churches, and community events, in high schools and colleges from coast to coast. In e-mail action alerts. In op-eds and letters to the editor. In radio and television appearances by ZOA leaders. Always on the front lines of pro-Israel activism, ZOA has made its mark.
Connect with us
Sign up for our Newsletter