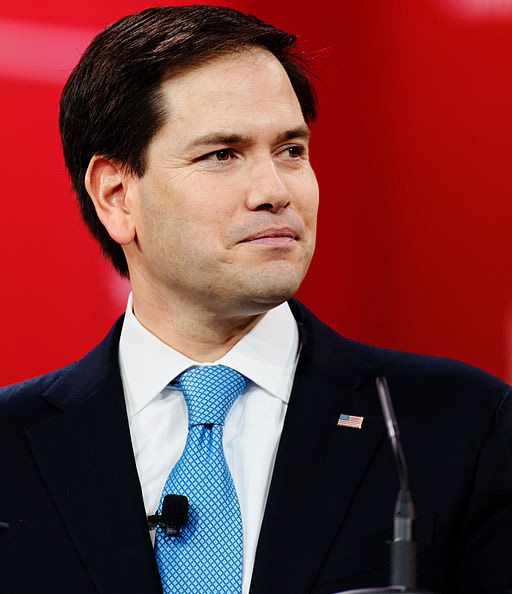 The Zionist Organization of America (ZOA) strongly supports and praises Senator Marco Rubio (R–FL) for his remarks in the Senate hearings on President Donald Trump’s nominee for Ambassador to Israel, David Friedman, in which he explained the absurdity of thinking that creating a Palestinian state under current conditions would be anything but a new terror state, endangering Israel and the region.

Klein: Senator Rubio was right to point to the necessity of the Palestinian-Arabs finally accepting the legitimacy and permanence of Israel as a Jewish state and the toxic role in the conflict played by PA incitement to hatred and murder.

“There’s also this misconception that continues to be spread around that you somehow have issued a wholesale rejection of the so-called two-state solution. I think you’ve already testified today that in a perfect and ideal world, you would have two independent states – a Jewish state and a Palestinian state, living peacefully side by side. The problem is that there are significant impediments to that – perhaps the least of which is the existence of Jewish settlements in Judea and Samaria. For example, I would say that one of the biggest obstacles to [this solution] was the efforts by the previous administration to pressure Israel and to impose on it a settlement outside the bounds of what the Jewish people in Israel support and what is in their interests. I would further say that a bigger impediment is the unwillingness of the PA leadership to recognize Israel’s right to exist as a Jewish state –– and that is the key phrase; not just Israel’s right to exist, but to exist as the homeland for the Jewish People. That is a big impediment to a deal, because how can you negotiate a peaceful existence with a neighbor who does not recognize your right to exist? What are you negotiating – the terms of your destruction? I think that’s a much bigger impediment.

“Or how about the wholesale systematic indoctrination of young Palestinians to hatred? The justification of the murdering of Jews begins sadly, tragically, outrageously, at a very young age. I think that’s a pretty big impediment. And you know what’s another impediment? The international efforts to impose on Israel a negotiated solution along the terms that other countries think are appropriate. That’s a big impediment… And another one is the incitement to violence by PA leaders; this is not widely-reported, because it doesn’t make it into their English-language press releases. But when they go around justifying these [terrorist] attacks, when they dedicate monuments to so-called martyrs who are actually nothing but terrorists, when they spread ridiculous rumors about what the Israeli government is going to do on the Temple Mount or the Dome of the Rock – these things incite violence; I view these things as bigger impediments than all the others” (Hillel Fendel, ‘Participating in Senate hearing for David Friedman as Ambassador to Israel, Rubio explains why two-state solution is not viable,’ Israel National News, February 21 2017).

ZOA National President Morton A. Klein said, “Senator Marco Rubio deserves our strong support and praise for a clear-sighted, principled exposition of the flawed orthodoxy that holds that establishing Mahmoud Abbas’ Palestinian Authority (PA) as a sovereign Palestinian-Arab state will bring  peace and the dawn of a new day.

“In fact, doing so would only ensure the emergence of simply another pro-terror, anti-peace, failed state, probably in alliance with the radical Shia extremist Iranian regime, which would also be a beggar state, squandering through aggression and corruption vast amounts off international aid.

“Senator Rubio was right to point to the necessity of the Palestinian-Arabs finally accepting the legitimacy and permanence of Israel as a Jewish state and the toxic role in the conflict played by PA incitement to hatred and murder.

“He clearly understands the real issues that stand in the way of peace and, just as important, which issues –– like Jews living in Judea/Samaria –– do not.”

We would love to hear from you! Please fill out this form and we will get in touch with you shortly.
Trending Z
Uncategorized February 24, 2017
ZOA Analysis: Most American Rabbis Who Are Boycotting Some Israeli Ministers Are From Extremist Left Wing Groups (J Street; T’ruah; JVP)
Uncategorized February 24, 2017
ZOA: Israel’s Reasonable Judicial Reform Proposals Are Good for Democracy, the Rule of Law and the Economy
Uncategorized February 24, 2017
Israel’s “Right of Return” Grandparent Clause is De-Judaizing the Jewish State – Eliminate It
News February 24, 2017
ZOA is Disappointed, Offended and Frightened by 211 U.S. House Votes Supporting Jew-Hating, Israel-Hating Rep. Ilhan Omar
Center for Law & Justice
We work to educate the American public and Congress about legal issues in order to advance the interests of Israel and the Jewish people.
We assist American victims of terrorism in vindicating their rights under the law, and seek to hold terrorists and sponsors of terrorism accountable for their actions.
We fight anti-Semitism and anti-Israel bias in the media and on college campuses.
We strive to enforce existing law and also to create new law in order to safeguard the rights of the Jewish people in the United States and Israel.
Our Mission
ZOA STATEMENT
The ZOA speaks out for Israel – in reports, newsletters, and other publications. In speeches in synagogues, churches, and community events, in high schools and colleges from coast to coast. In e-mail action alerts. In op-eds and letters to the editor. In radio and television appearances by ZOA leaders. Always on the front lines of pro-Israel activism, ZOA has made its mark.
Related Articles
OP-ED BY: ZOA Staff ZOA Condemns Kerry For Supporting Iran’s Outrageous Demands Despite Violations