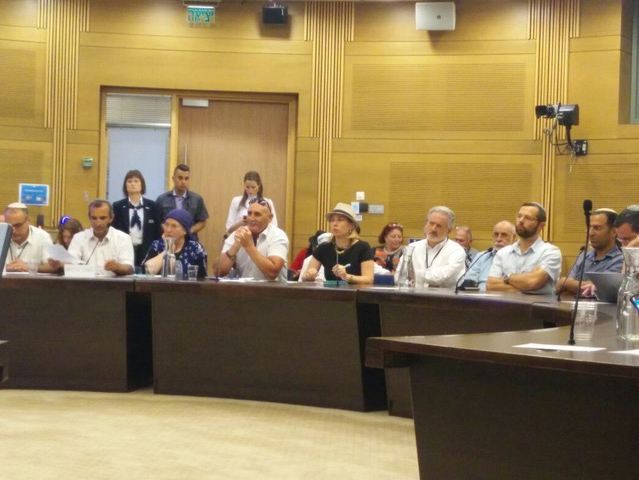 ISRAEL, June 8. ZOA Israel director Jeff Daube, also the co-chair with Arlene Kushner the respected Legal Grounds Campaign largely supported by ZOA, was invited to testify at a special session of the Knesset House Committee coinciding with the Six Day War’s golden anniversary this week. The hearing, convened to explore ways of adapting Israeli law for fairer treatment of citizens in Judea and Samaria, was well attended by government ministers and Knesset members, welcoming the chance to end to fifty years of marginalization based on residence.

“Israeli citizens who live beyond the Green Line pay taxes and serve in the army, like everyone else. They deserve the same rights guaranteed by the laws that concern, for example, access for the disabled, environmental quality, and worker entitlements.”

Weeks earlier, Legal Grounds had decided to enter the discussion about citizen rights once it realized the important Shaked-Levin directive would not be applied retroactively. The directive is even more limited than that as it only applies to government sourced bills, and not to private bills introduced independently by Knesset members.

Bayit Yehudi faction head and ZOA Israel friend MK Shulamit Mualem, one of the many attendees agreeing with Legal Grounds that measures must be sought to expand on the Shaked-Levin directive to include private past and future bills, stated, “The lack of total equality [in Judea and Samaria] is something that needs to be rectified.” By way of example, she continued, during the last two and a quarter years of the currently serving Knesset, 322 laws have been enacted but only five may be implemented over the Green Line.

Testifying as well before the plenum, Legal Grounds spokesperson Shlomit Goldin-Halevy added, “It’s a shame that human rights groups do not bother to discuss the rights of Israeli citizens who are harmed due to the legislative gaps. Israeli citizens who live beyond the Green Line pay taxes and serve in the army, like everyone else. They deserve the same rights guaranteed by the laws that concern, for example, access for the disabled, environmental quality, and worker entitlements.”

Legal Grounds plans on pursuing modifications to extant legislation to ensure that, besides in the aforementioned areas, prohibitions against denying business services to uniformed IDF soldiers, along with maternity rights and other rights under consideration are extended to Judea and Samaria. Legal Grounds also will be setting up a committee to monitor the activities of Knesset members toward these ends.

Daube later shared that he was committed to combating—in his dual capacity as director of the ZOA Israel Office and co-head of Legal Grounds—accusations of the Israeli and American extreme Left that initiatives such as his constitute “creeping annexation.”

“‘Creeping equalization’ would be a more apt term,” Daube said. “After fifty years of discrimination against the Israeli citizens living in Israel’s heartland communities of Judea and Samaria, it’s about time we witnessed meaningful change under the law.

Besides overlooking the injustices of the current status, the protestors conveniently ignore the fact that such moves do not meet the legal criteria for annexation. Furthermore, remediating the problem now does not preclude future negotiations on any reasonable option being contemplated for the land’s eventual disposition.”

Following the hearing, the Legal Grounds co-chairs sent a letter apprising Knesset leaders that, after six months, they will issue a report to let the general public—especially residents of Judea and Samaria— about the steps being taken by the named MKs to advance new legislation and amend previous legislation benefiting all of Israel’s citizens.

We would love to hear from you! Please fill out this form and we will get in touch with you shortly.
Trending Z
Uncategorized June 12, 2017
FLASH: ISRAEL-JORDAN PEACE TREATY (1994) GUARANTEES JEWS ACCESS TO THE TEMPLE MOUNT – LET MY PEOPLE PRAY
Uncategorized June 12, 2017
ZOA Analysis: Most American Rabbis Who Are Boycotting Some Israeli Ministers Are From Extremist Left Wing Groups (J Street; T’ruah; JVP)
Uncategorized June 12, 2017
Israel’s “Right of Return” Grandparent Clause is De-Judaizing the Jewish State – Eliminate It
Uncategorized June 12, 2017
Exclusive: ZOA Accuses Ilhan Omar of Hating the U.S. ‘as Much as Israel,’ Lauds Kevin McCarthy for ‘Throwing Her Off the HFAC’
Center for Law & Justice
We work to educate the American public and Congress about legal issues in order to advance the interests of Israel and the Jewish people.
We assist American victims of terrorism in vindicating their rights under the law, and seek to hold terrorists and sponsors of terrorism accountable for their actions.
We fight anti-Semitism and anti-Israel bias in the media and on college campuses.
We strive to enforce existing law and also to create new law in order to safeguard the rights of the Jewish people in the United States and Israel.
Our Mission
ZOA STATEMENT
The ZOA speaks out for Israel – in reports, newsletters, and other publications. In speeches in synagogues, churches, and community events, in high schools and colleges from coast to coast. In e-mail action alerts. In op-eds and letters to the editor. In radio and television appearances by ZOA leaders. Always on the front lines of pro-Israel activism, ZOA has made its mark.
Connect with us
Sign up for our Newsletter