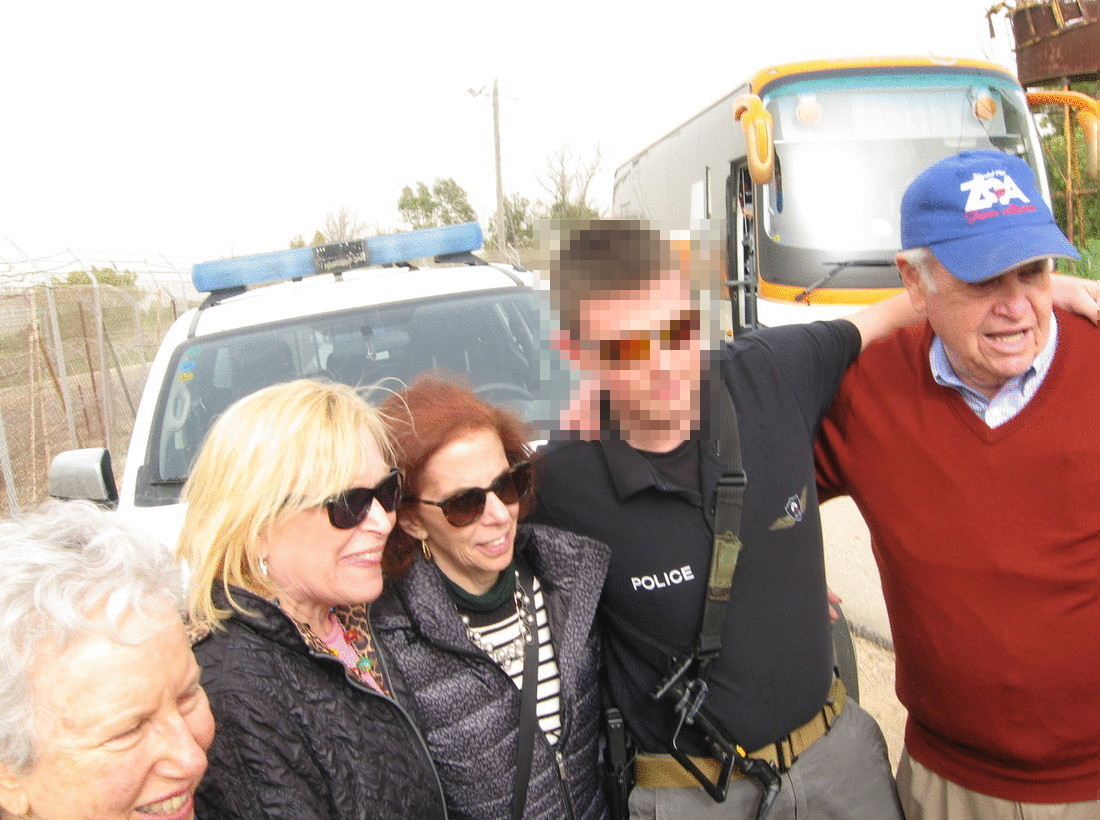 I am simply blown away by the readiness and desire of young Israelis to sacrifice for the greater good.

Periodically, I get reminders of this patriotic devotion from the occasional call or CV containing email prospecting for even a modest opportunity to work with ZOA Israel. Many of these individuals have served with distinction in elite IDF combat and commando units, e.g., Golani or Sayeret Matkal, and they continue to serve annually in the reserves. They may have received advanced degrees, or be working already in high paying jobs such as in hi-tech or finance.

When asked the inevitable question—why they are willing to give up lucrative careers and easier feeding of multiple mouths in their blessedly large households—they tell me it’s because they’re not doing enough for their country. They desperately want to do more, whether by helping Israel make its case or by protecting its interests.

Zipping from area to area with the police and Yatar, as we had for the first half of the fairly uneventful joint patrol, would have been excitement enough for me. Suddenly, though, things started to get more interesting—almost too interesting.

My latest reminder of Israeli youthful dedication came up again, but with something of a twist, when I was treated on one cold and stormy February night to a behind-the-scenes, eye-opening Jerusalem experience I will not soon forget.

Days earlier, I had received the call from M* asking if I’d like a firsthand introduction to the work of Yatar CTU. M, a senior member of its staff, explained that Yatar is an armed and mobile auxiliary force, on steroids you might say. Attracting the most intrepid of volunteers—many hailing from the same elite IDF units mentioned above—Yatar provides hand in glove counter-terrorism assistance to the national and border (Magav) police, especially where they’re stretched to the limit: in and around Jerusalem, in Hebron and Beersheva, and on the Gaza border.

As one constantly immersed in the security situation in eastern Jerusalem, for example on the Mount of Olives where Yatar also operates, I had heard of the organization but not much about them. I was glad of M’s offer to educate me. And so she did!

Taking her up on her suggestion to join a Yatar patrol that week—that is, after I had obtained the required security clearance and special insurance coverage—I steppedinto M’s car on Thursday at 11:30 PM, drove with her to the outskirts of Jerusalem, and waited patiently for the call directing us to our meetup location. This is how M’s routine regularly starts off, with the police understandably having forbidden Yatar, which always accompanies them, to telegraph their whereabouts until the very last minute.

During the long wait I had a chance to ask M why she—the mother of a beautiful little girl, and wife of a Golani who had distinguished himself during the second Lebanon War flushing out Hizbullah terrorists behind enemy lines—felt comfortable placing herself in harm’s way night after night into the wee hours.

M said it was because of the brutal terrorist murder last year of thirteen year old Hallel Yaffa Ariel z”l as she lay in her bed. (Coincidentally, I had communicated with Hallel’s mother Rina earlier on this very day that M and I were sitting together, having been in contact about State and Justice department services for American victims, and about scheduling her to address an upcoming ZOA mission.) News of the murder had touched M profoundly. Thinking about Hallel, and of her own daughter in turn, M then decided that she must work to ensure security for Israel’s other innocents however she could.

Our conversation was interrupted by the call, which instructed us to meet the police and Yatar units in the lovely town of Mevaseret Zion, slightly west of Jerusalem. M immediately gunned the engine. In what felt like seconds later, as if shot out of a cannon, we found ourselves sitting behind two SUVs with their blue lights flashing and about to take off.

Zipping from area to area with the police and Yatar, as we had for the first half of the fairly uneventful joint patrol, would have been excitement enough for me. Suddenly, though, things started to get more interesting—almost too interesting.

First, the police commander raced over to Y, head of Yatar in Jerusalem, who raced over to us and directed M to trail closely behind the police. Y then ran back to the Yatar unit, which bolted off in another direction. What followed was nothing less than a mad dash, filled with screeching U and K turns and doubling back moves, which finally ended with our stopping in an eastern Jerusalem alleyway. Without divulging the name of the Arab neighborhood, suffice it to say that its reputation as a hotbed of anti-Israel violent activity is well deserved.

T, Yatar’s founding commander, came over to us and explained they were in pursuit of suspected terrorists. He pointed to a white car, awkwardly parked and with doors left wide open, that was thought to be theirs. (I found out later that weapons had been found inside.) The car was identified and then impounded for further investigation.

M and I eventually were ordered to leave the scene, as we were unarmed and in an unarmored vehicle. While driving me back to my comfy, dry home, M received a call from T that the wintry conditions had caused an Egged bus to plunge into a ravine, near the Shomron community of Maale Levonah. Two already had been reported dead, and an unknown number were injured. Yatar once again was off to the races to assist in anyway possible.

Before she herself moved on to a hot spot elsewhere, M told me that Yatar (which stands for Yechidat Tractoronim in Hebrew, ATV units in English) is committed to providing its volunteers with state-of-the-art equipment, from vests that are resistant to bullets and knives, to the specially designed all-terrain vehicles enabling them to patrol and give chase in areas where cars cannot go, as in the Old City in Jerusalem.

In that context, M again recalled Hallel, whose seventeen year old assailant might have been intercepted had ATVs been in use in Hebron-Kiryat Arba. M also pointed to the deterrent value of such vehicles being known to be in the Yatar arsenal, as would-be terrorists then could never be sure whether an ATV might come flying down a narrow side street to facilitate their capture.

I had felt rather safe throughout my little adventure on the town, enveloped as I was in a sea of protective flashing lights and police officers. Nonetheless, it still took a while for my heart to drop down from my throat and for my white knuckles to return to their usual color. The fact that all of this had transpired during on-again-off-again torrential downpours only added to my understanding of the hardships endured nightly by the courageous, selfless volunteers of Yatar.

So what was my takeaway, about these young unsung heroes, as I left M’s car at 2:30AM? I can summarize in just thirteen words:

The reason why I can sleep at night is because they do not!

* This is a re-posting of a March article, which was taken down after notification ofHamas plans to kidnap Israeli soldiers and security personnel. Permission eventuallywas granted to post this modified version further protecting the identities of Yatar’sleaders and volunteers.

We would love to hear from you! Please fill out this form and we will get in touch with you shortly.
Trending Z
Uncategorized June 23, 2017
FLASH: ISRAEL-JORDAN PEACE TREATY (1994) GUARANTEES JEWS ACCESS TO THE TEMPLE MOUNT – LET MY PEOPLE PRAY
Uncategorized June 23, 2017
ZOA Analysis: Most American Rabbis Who Are Boycotting Some Israeli Ministers Are From Extremist Left Wing Groups (J Street; T’ruah; JVP)
Uncategorized June 23, 2017
Israel’s “Right of Return” Grandparent Clause is De-Judaizing the Jewish State – Eliminate It
Uncategorized June 23, 2017
Exclusive: ZOA Accuses Ilhan Omar of Hating the U.S. ‘as Much as Israel,’ Lauds Kevin McCarthy for ‘Throwing Her Off the HFAC’
Center for Law & Justice
We work to educate the American public and Congress about legal issues in order to advance the interests of Israel and the Jewish people.
We assist American victims of terrorism in vindicating their rights under the law, and seek to hold terrorists and sponsors of terrorism accountable for their actions.
We fight anti-Semitism and anti-Israel bias in the media and on college campuses.
We strive to enforce existing law and also to create new law in order to safeguard the rights of the Jewish people in the United States and Israel.
Our Mission
ZOA STATEMENT
The ZOA speaks out for Israel – in reports, newsletters, and other publications. In speeches in synagogues, churches, and community events, in high schools and colleges from coast to coast. In e-mail action alerts. In op-eds and letters to the editor. In radio and television appearances by ZOA leaders. Always on the front lines of pro-Israel activism, ZOA has made its mark.
Connect with us
Sign up for our Newsletter