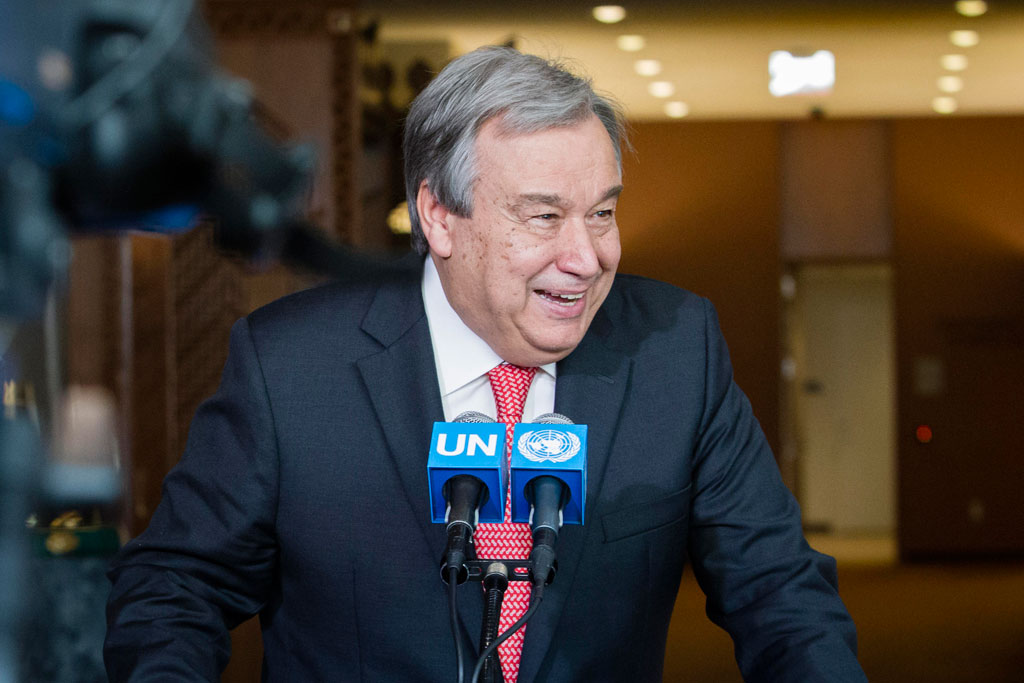 The Zionist Organization of America (ZOA) has criticized a statement issued by United Nations Secretary-General, Antonio Guterres, in the wake of the terrorist attack on Jerusalem’s Temple Mount, in which two Palestinian Arab terrorists smuggled firearms into the Al-Aqsa Mosque, atop Temple Mount, and then used them to murder two Israeli policemen.

On July 26, Secretary-General Guterres issued a statement in which he said it was “essential to fully respect the status quo at the holy sites as before 14 July” and urged “all political, religious and community leaders to refrain from provocative action and rhetoric; and call[s] on Israel to demonstrate restraint” (‘Statement by the Secretary-General on continuing tensions in the Old City of Jerusalem,’ July 26, 2017).

ZOA National President Morton A. Klein said, “We are both disappointed and critical of Secretary-General Guterres’ words on this occasion.

“To call for respecting the pre-July 14 status quo is to blatantly side with the absurd Palestinian Arab demand that Israel remove extra security measures it responsibly put in place to prevent and deter a repetition of the terrorist attack on July 14 which claimed the lives of two Israeli policemen.

“Secretary-General Guterres also engaged in false moral equivalence in his call for all sides to refrain from provocative action and especially in singling out Israel in his call for ‘restraint.’

“Terrorism that claims Israeli lives is not ‘provocative’ –– it is murder. Steps to prevent a repetition of such murder is not ‘provocative’ and lacking in ‘restraint,’ even if Palestinian Arabs choose to riot and foment violence over it. Mr. Guterres should have used his office to say so.

“The Secretary-General statement also amounts to confounding perpetrator with victim and to incentivizing terrorism, whose practitioners seek public criticism and condemnation of those they attack as an essential element of their strategy of blood-soaked violence.

“It is both factually and morally false to imply that Israel instituting responsible security measures, like metal detectors –– which are in use at Mecca, the Vatican, and other sensitive religious sites –– is in any way inflammatory, simply because Palestinian Arabs choose to cause riots over the matter, at the instigation and encouragement of Mahmoud Abbas’ Palestinian Authority (PA).

“Secretary-General Guterres should have publicly criticized the PA for fanning the flames of violence, instead of responsibly calling on its people to avoid violence.

“Such criticism from the Secretary-General would have sent a powerful message that inciting and supporting violence was unacceptable and worthy of condemnation. Why did he not do so?

“We are also disappointed at the bias in the Secretary-General’s remarks, as evidenced by the contrast with several other statements he has issued in other instances of terrorism elsewhere in the world, which did not engage in similar moral equivalence and bias.

“Thus, on July 24, Secretary-General Guterres condemned a terrorist attack in Kabul, Afghanistan, calling it a ‘grave violation of human rights and international humanitarian law, and may constitute a war crime.’ Why wasn’t the unprovoked murder of two Israeli policemen also described as such?

“Also, on the same day, Mr. Guterres issued a statement on the terrorist attack in Lahore, Pakistan in which he said that he ‘supports the efforts of the Government of Pakistan to fight terrorism and violent extremism.’ Why did he not do so here?

“The answer seems to be because it was Israeli lives that were lost and because it was Israel whose efforts to fight terrorism had to be supported –– something the Organization of the Islamic Conference (OIC), which controls the largest, so-called Non-aligned Bloc, at the UN, opposes.

“We are disappointed with Secretary-General Guterres falling in line behind the OIC because we have praised him for previously criticizing a blatantly hostile anti-Israel report produced by 9/11 conspiracy theorist and long-time Israel-basher Richard Falk on behalf of the  United Nations Economic and Social Commission for Western Asia (ESCWA) that accused Israel of establishing an ‘apartheid regime.’

“Secretary-General Guterres has also previously stated that the Temple Mount is the site of the biblical Jewish temples and did not back off this position when criticized by the Palestinian Authority for the ‘sin’ of saying so.

“He has also spoken incisively of the nature and evils of anti-Semitism.

“We hope Secretary-General Guterres will not repeat this statement on any similar occasion that might arise and instead place responsibility for violence and terrorism where it belongs –– on the perpetrators of terrorism and its enablers, backers and supporters –– not on those whose duty is to respond to to it and ensure the safety of all people on Jerusalem’s Temple Mount.”

We would love to hear from you! Please fill out this form and we will get in touch with you shortly.
Trending Z
Uncategorized August 2, 2017
ZOA Analysis: Most American Rabbis Who Are Boycotting Some Israeli Ministers Are From Extremist Left Wing Groups (J Street; T’ruah; JVP)
News August 2, 2017
ZOA is Disappointed, Offended and Frightened by 211 U.S. House Votes Supporting Jew-Hating, Israel-Hating Rep. Ilhan Omar
Uncategorized August 2, 2017
ZOA: Israel’s Reasonable Judicial Reform Proposals Are Good for Democracy, the Rule of Law and the Economy
Uncategorized August 2, 2017
Israel’s “Right of Return” Grandparent Clause is De-Judaizing the Jewish State – Eliminate It
Center for Law & Justice
We work to educate the American public and Congress about legal issues in order to advance the interests of Israel and the Jewish people.
We assist American victims of terrorism in vindicating their rights under the law, and seek to hold terrorists and sponsors of terrorism accountable for their actions.
We fight anti-Semitism and anti-Israel bias in the media and on college campuses.
We strive to enforce existing law and also to create new law in order to safeguard the rights of the Jewish people in the United States and Israel.
Our Mission
ZOA STATEMENT
The ZOA speaks out for Israel – in reports, newsletters, and other publications. In speeches in synagogues, churches, and community events, in high schools and colleges from coast to coast. In e-mail action alerts. In op-eds and letters to the editor. In radio and television appearances by ZOA leaders. Always on the front lines of pro-Israel activism, ZOA has made its mark.
Related Articles
OP-ED BY: ZOA Staff ADL “Studying” Whether to Oppose BDS in Judea/Samaria