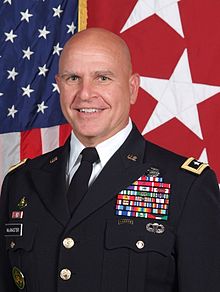 The Zionist Organization of America (ZOA) has pointed out it’s revealing and illuminating that the Trump-hating radical anti-Israel Islamic lobby in America, the Council on American-Islamic Relations (CAIR), has promptly come to the defense of President Donald Trump’s National Security Adviser, General H.R. McMaster, whose anti-Israel pro-Iran deal, troubling hiring and firing actions, anti-draining the Washington swamp record has been comprehensively outlined in a recent ZOA report.

Why are so many left wing Israel bashers supporting McMaster and condemning his critics utilizing name calling-without substance; while so many extraordinarily pro-Israel people are criticizing and opposing him?

As anyone who peruses the ZOA report on General McMaster will instantly see that CAIRs’s limited argument about these three firings constitute only a small part of the overall case for the ZOA’s call for the reassignment of General McMaster, while also being deeply worrying in themselves.

Supporters of McMaster also include the radical Islamic anti-Israel group CAIR, left wing, Trump-hating, Soros-funded anti Israel group Media Matters, anti-Israel TV commentator Van Jones and others. CAIR was formally an unindicted co-conspirator in the Holy Land  Foundation trial and Hamas financing case that resulted in the FBI discontinuing working with CAIR. Van Jones has been harshly critical of Israel. He signed a letter calling on Pres. Obama to “impose a final settlement” on Israel backed by sanctions. Van Jones supports the “right of return of the Palestinian people” which would destroy Israel as a Jewish State. And he  clearly opposes Israel’s very existence by condemning in 2002 its “occupation for 54 years,” meaning since Israel’s reestablishment in 1948! Moreover, Jones also, on CNN, tried to end any discussion of criticism of McMaster by calling his critics “the dirty right” without offering any substantive issues.

CAIR is an unindicted co-conspirator in the Holy Land Foundation trial and Hamas financing case that resulted in the FBI discontinuing its working relationship with the organization. CAIR officials have voiced support for terrorist movements, harbors (admitted) ambitions for replacing the Constitution with the Quran and has employed personnel who have been implicated in crimes consistent with these aspirations. For example, in 2013, Mustafa Carroll, executive director of CAIR’s Dallas-Fort Worth branch, stated, “If we are practicing Muslims, we are above the law of the land.” CAIR agitated the removal of a Los Angeles billboard that declared Osama bin Laden to be “the sworn enemy”, claiming the billboard was “offensive to Muslims”.

In 2009, a federal judge concluded that the government had found “ample evidence” to link CAIR with Hamas, the Palestinian Islamic terrorist organization and off-shoot of the Muslim Brotherhood that has murdered hundreds of Israelis in scores of suicide bombings and hundreds of other attacks, and which calls in its Covenant for the destruction of Israel and the global murder of Jews. CAIR executive director Nihad Awad, has a long history of pro-HAMAS statements, according to critics.

CAIR’s defense of General McMaster also coincides with revelations that General McMaster refused to state that Israel was fighting an “ethical war” against Hamas in Gaza when specifically asked about this during the Q&A session that followed a speech he delivered in December 2014, several months after the 2014 Gaza war.

The ZOA is puzzled and deeply concerned that he refused to do so, even though leading US and British military figures, personally familiar with the difficulties of fighting terrorists where human shields are used, have testified to Israel observing higher ethical standards than any other country in history.

In a speech to the Carnegie Council for Ethics in International Affairs on December 4, 2014, an audience member asked General McMaster, “would you consider the IDF [Israel Defense Forces] conduct of the recent war and prior wars as a template for the ethical conduct of war?” General McMaster refused to say that Israel’s conduct was ethical, despite noting that it was “responding to attacks” and that a “broader sort of humanitarian standard … doesn’t apply as a complete transfer over to wartime situations” (‘A Conversation with Lieutenant General H. R. McMaster,’ Carnegie Council for Ethics in International Affairs, December 4, 2014).

General McMaster’s self-admitted “non-answer” starkly contrasted with the words of General Martin Dempsey, former Chairman of the Joint Chiefs of Staff (2011-15), who said one month before McMaster in relation to the 2014 Gaza war that Israel went to “extraordinary lengths” to minimize civilians casualties (‘Dempsey: Israel Went to “Extraordinary Length” to Avoid Civilian Casualties in Gaza, Haaretz, November 7, 2014).

ZOA National President Morton A. Klein said, “It is very telling that an anti-Israel radical Islamic organization like CAIR, with its long, well-documented history of support for radical Islamic terrorist organizations and smearing anyone who exposes the activities of radical Islamic groups as racists and haters, along with Israel haters Van Jones and Media Matters have leapt to the defense of General McMaster so quickly after he has been subjected to criticism and exposure for his record towards Israel, the Iran nuclear deal and so on by the ardently pro Israel ZOA, Frank Gaffney’s The Center for Security Policy, Jerusalem Post’s Caroline Glick, and other analysts in recent days.

“Any American patriot should be alarmed by any sort of endorsement offered by CAIR. In any event, CAIR’s defense of General McMaster does nothing to refute the details of the record the ZOA has presented earlier in the week and, indeed, would seem to confirm it.

“Moreover, we remain additionally concerned by General McMaster’s worrying refusal to correctly describe, when publicly asked, Israel’s conduct in the 2014 Gaza war as highly ethical, especially given that it observes standards that no other army, including even our own, have met.

“We also note that former Obama appointee and Senator Feinstein Aide, left wing Ambassador Shapiro has criticized our report on General McMaster by name calling – not with substance – which says far more about Ambassador Shapiro than about ZOA. After all, when his successor, David Friedman, was nominated by President Trump as Ambassador, he was attacked by many individuals and organizations because he is strongly pro-Israel, yet Ambassador Shapiro did not leap to his defense and call his critics names. Why? And why are so many left wing Israel bashers supporting McMaster and condemning his critics utilizing name calling-without substance; while so many extraordinarily pro-Israel people are criticizing and opposing him? Therefore, the ZOA feels compelled to ask that General McMaster be reassigned to an area not dealing with Israel, Iran, or radical Islamic terrorism unless and until he can explain why our concerns are not warranted.”

We would love to hear from you! Please fill out this form and we will get in touch with you shortly.
Trending Z
News August 15, 2017
ZOA Condemns U.S. State Dept. & U.S. Amb. Nides For Siding with Antisemitic, Discriminatory Palestinian & Hamas Terrorists re: the Temple Mount, Violating Jews’ Religious Freedom
Uncategorized August 15, 2017
FLASH: ISRAEL-JORDAN PEACE TREATY (1994) GUARANTEES JEWS ACCESS TO THE TEMPLE MOUNT – LET MY PEOPLE PRAY
Uncategorized August 15, 2017
ZOA Analysis: Most American Rabbis Who Are Boycotting Some Israeli Ministers Are From Extremist Left Wing Groups (J Street; T’ruah; JVP)
Uncategorized August 15, 2017
Israel’s “Right of Return” Grandparent Clause is De-Judaizing the Jewish State – Eliminate It
Center for Law & Justice
We work to educate the American public and Congress about legal issues in order to advance the interests of Israel and the Jewish people.
We assist American victims of terrorism in vindicating their rights under the law, and seek to hold terrorists and sponsors of terrorism accountable for their actions.
We fight anti-Semitism and anti-Israel bias in the media and on college campuses.
We strive to enforce existing law and also to create new law in order to safeguard the rights of the Jewish people in the United States and Israel.
Our Mission
ZOA STATEMENT
The ZOA speaks out for Israel – in reports, newsletters, and other publications. In speeches in synagogues, churches, and community events, in high schools and colleges from coast to coast. In e-mail action alerts. In op-eds and letters to the editor. In radio and television appearances by ZOA leaders. Always on the front lines of pro-Israel activism, ZOA has made its mark.
Related Articles
OP-ED BY: ZOA Staff ADL “Studying” Whether to Oppose BDS in Judea/Samaria