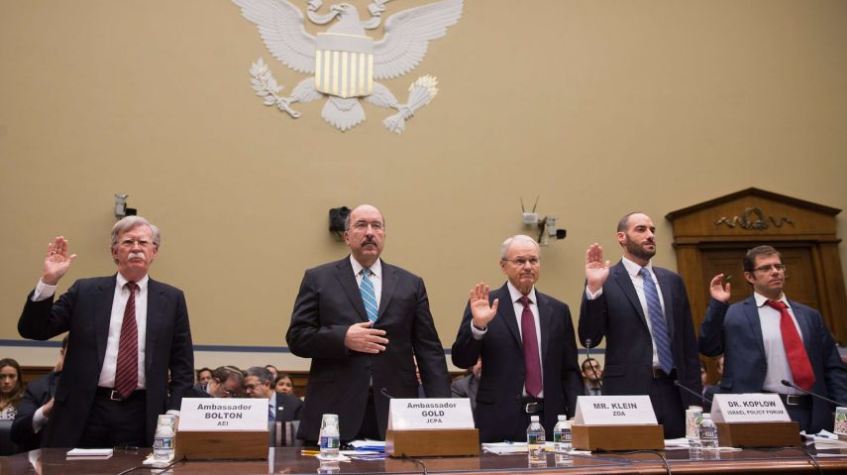 Dore Gold, the former director general of the Foreign Ministry, said on Wednesday that he was certain that U.S. President Donald Trump intends to move the U.S. Embassy in Israel from Tel Aviv to Jerusalem.”President Donald Trump has made a commitment in that regard and I believe he will stand by what he has said,” Gold, who is a close confidant of Prime Minister Benjamin Netanyahu, told a U.S. congressional subcommittee. The Prime Minister’s Office confirmed recently that Gold is in the running to replace Isaac Molho as Netanyahu’s special diplomatic envoy. Molho, a lawyer and long-time confident of the prime minister, was detained for questioning by police on Sunday in connection with alleged corruption in Israel’s procurement of submarines and missile boats from Germany. Gold was speaking on a panel during a congressional hearing on “the benefits and challenges of relocating” the U.S. Embassy from Tel Aviv to Jerusalem, a transfer that had promised during his campaign.

The testimony was deliberately scheduled ahead of December 1, Trump’s deadline to decide whether to once again exercise the waiver delaying the embassy’s relocation, a measure every U.S. president has made since 1995.

“If we allow U.S. policy to be deterred by terror threats, we have only encouraged more such threats and more such terror,” said Klein.

In June, Trump signed the waiver and broke his explicit campaign election promise, to the dismay of many pro-Israel advocates and donors who had supported his candidacy. Rep. Ron DeSantis, a Republican from Florida who chairs the committee that convened the session, is a strong advocate of the embassy move. The Washington Free Beacon reported on Tuesday that DeSantis said congressional Republicans were working to “amp up pressure” on Trump to refuse to sign the waiver. Calling the embassy move “long overdue,” DeSantis said “it is absurd that Israel is the only nation in the world where our embassy is not located in the nation’s capital city.” He added:  “This is no way to treat an ally, much less one of our closest allies.” During the hearing, DeSantis said that Israelis he had spoken with from the political “left, right and center” had urged him to push for moving the embassy as soon as possible.

Gold, however, carefully refrained from publicly calling on the Trump administration to refuse to sign the waiver, saying that he is leaving it to the White House to “evaluate the timing and circumstances for executing that decision in accordance with its interests.” Instead, he argued that the U.S. – in accordance with “peace, religious pluralism and mutual respect” – should unequivocally support Israel’s claim to Jerusalem due to its stewardship of the city’s Christian, Muslim and Jewish holy sites. Gold said that Israel is the “only international actor that will protect these sites” at a time when “religious sites are under attack across the Arab world.” But several of the other witnesses – Ambassador John Bolton, senior fellow at the American Enterprise Institute, Professor Eugene Kontorovich, Morton Klein from the Zionist Organization of America – were more outspoken in advocating an end to the waivers, which would set an embassy relocation in motion. Only one of the witnesses, Dr. Michael Koplow of the Israel Policy Forum, testified that it would be wise for Trump to once again delay an embassy move.

The most emphatic of the group was Bolton, who was a staunch Trump supporter during his campaign and was considered, but ultimately passed over, for several top positions in the Trump administration. Bolton, who has frequently criticized the president’s foreign policy, described arguments against moving the embassy as “overblown, misguided and outdated.” “We hear over and over again that we want to move the embassy, but the time is just not right,” Bolton testified. “In diplomatic circles, not now means not ever. We should move the embassy to Israel’s capital city.” Asked by one of the committee members when he believed that should happen, he responded, “I think the appropriate time to make the move is today.” 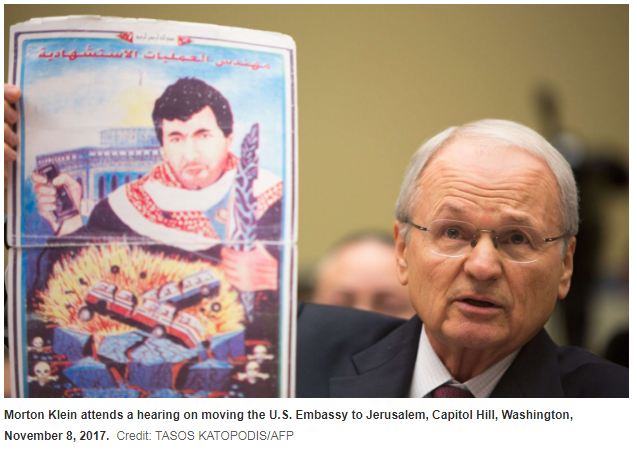 Bolton, along with Klein and Kontorovich, pushed back against common arguments against an embassy move – that it would spark violent protests and political instability in the region, damage any future prospects for peace between Israel and the Palestinians, and that it would harm U.S. relations with neighboring countries. “I think we should take seriously the concern of countries like Egypt and Jordan,” Bolton said. “But that doesn’t mean they should have a veto.” “If we allow U.S. policy to be deterred by terror threats, we have only encouraged more such threats and more such terror,” said Klein, whose group is supported by Republican mega-donor Sheldon Adelson, a Trump supporter. He charged that, over the years, “The Jerusalem Embassy Waiver Provision has been inappropriately used” and that it was intended only to be invoked for a “serious emergency,” not foreign policy. Klein added that “we are no closer to peace than we were,” and therefore, “not moving the embassy did not help.” Kontorovich was also emphatic in advocating that the White House end the policy of waiving the embassy moves. In concurrence with Klein, he said that delaying the embassy’s relocation “based on such threats encourages such threats.”

He also said that while the security arguments against moving the embassy “continue to be recited as if nothing has changed,” the region has undergone significant upheavals that negated those arguments.  Kontorovich added that Saudi Arabia, which is locked in a power struggle with Iran, “can’t afford” to alienate the U.S. and would not break diplomatic ties over an embassy move. After the Arab Spring, he said, the situation had become very different. “We used to warn that the Arab street would explode. Well, it has already exploded entirely. U.S. embassies are constantly under threat and there is no other situation where threats to embassies are given as a reason not to have embassies in the nation’s capital.” Koplow, who heads a center-left think tank, noted what he described as the “historic wrong of locating the embassy in a place that is not Israel’s declared capital.” He argued that “there should be no ambiguity about Israel’s true capital” and that the time was not right for an embassy move. Koplow’s position as the sole witness to oppose an immediate embassy move led one of the Republican congressmen to jokingly label him the “skunk at the party.”

Among his concerns, Koplow said he was “worried” that a change in the status quo in Jerusalem would spark violence as it had in the past, as well as trigger unrest in neighboring states, which would damage U.S. security arrangements with those countries. “If the U.S. moves the embassy it is going to put cooperation at risk and it is something to take into consideration,” Koplow said. The main reason not to move the embassy, however, Koplow argued, is that the relocation could damage any peace initiative between Israel and the Palestinians the Trump administration is planning to unveil. According to Koplow, an embassy move should be part and parcel of a peace negotiation. “Doing it at the beginning of negotiations, not at the end, will make peace harder to achieve,” he said. Koplow’s concerns were echoed by committee members like Democratic Rep. Stephen Lynch, who said that choosing “to simply disregard the positions of other regional partners on this matter that have been expressed by the governments of Jordan, of Egypt and other Arab regional nation partners will prove ultimately detrimental to U.S., Israeli, and regional security interests in the near term.”

This article was published by Haaretz and may be found here.

We would love to hear from you! Please fill out this form and we will get in touch with you shortly.
Trending Z
Uncategorized November 9, 2017
FLASH: ISRAEL-JORDAN PEACE TREATY (1994) GUARANTEES JEWS ACCESS TO THE TEMPLE MOUNT – LET MY PEOPLE PRAY
Uncategorized November 9, 2017
ZOA Analysis: Most American Rabbis Who Are Boycotting Some Israeli Ministers Are From Extremist Left Wing Groups (J Street; T’ruah; JVP)
Uncategorized November 9, 2017
Israel’s “Right of Return” Grandparent Clause is De-Judaizing the Jewish State – Eliminate It
Uncategorized November 9, 2017
Exclusive: ZOA Accuses Ilhan Omar of Hating the U.S. ‘as Much as Israel,’ Lauds Kevin McCarthy for ‘Throwing Her Off the HFAC’
Center for Law & Justice
We work to educate the American public and Congress about legal issues in order to advance the interests of Israel and the Jewish people.
We assist American victims of terrorism in vindicating their rights under the law, and seek to hold terrorists and sponsors of terrorism accountable for their actions.
We fight anti-Semitism and anti-Israel bias in the media and on college campuses.
We strive to enforce existing law and also to create new law in order to safeguard the rights of the Jewish people in the United States and Israel.
Our Mission
ZOA STATEMENT
The ZOA speaks out for Israel – in reports, newsletters, and other publications. In speeches in synagogues, churches, and community events, in high schools and colleges from coast to coast. In e-mail action alerts. In op-eds and letters to the editor. In radio and television appearances by ZOA leaders. Always on the front lines of pro-Israel activism, ZOA has made its mark.
Connect with us
Sign up for our Newsletter