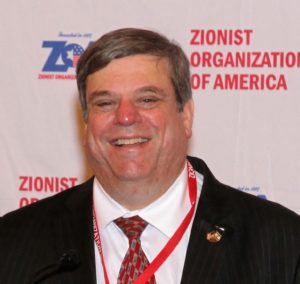 From remarks delivered on June 25th, 2017, at the 73rd memorial Ceremony for Major General Orde Wingate, at Arlington National Cemetery, where he is interred.

The Israeli Defense Forces (IDF) are different than other armies. Their tactics often involve unexpected solutions to standard problems, and their junior officers lead from the front at all times, resulting unfortunately in the highest casualty rates for junior officers of any army in history.

May we always remember those who helped fulfill the ancient dream of the Jewish people to return home, always respecting our rights to our faith and pride as Jews.

While on leave in England in May of 1939, Wingate was interviewed, and did not attempt to hide his strong Zionist feelings. He openly advocated for the establishment of a Jewish State. In response, his superiors changed his assignment, and stamped his passport: ‘Not allowed to enter Palestine.’

To understand how this happened one must look back in history to the 1936-1939 Arab revolt against the British in what was then the Mandate of Palestine, designated by the League of Nations as a future ‘National Home for the Jews.’

The Arabs were upset about Jewish immigration to the Holy Land, and the war was not going well for the British. Arab irregular combatants would gather in their towns at night, and attack a British outpost or cut the vital petroleum pipeline from Iraq to Haifa, and there was little the British could do to stop them.

The Tegart Forts one sees in Israel today are one artifact from this period, as the British attempted to defend their garrisons by building fortifications defended by high walls and machine guns that irregular troops would hesitate to attack. For the first two years of the revolt, though, only defensive measures worked for the colonial authorities. To their credit, during the day they used the RAF in an innovative way to combat anti-insurgency, but at night, the insurgents went where they wanted. 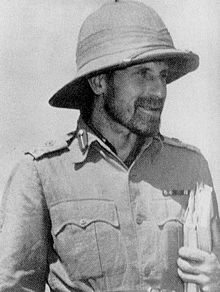 Captain Orde Wingate of the British Army had been assigned as a 33-year old intelligence officer to Palestine in 1936. Unlike virtually all of his peers, who generally disliked the Jews of the Yishuv, he was religiously motivated to view the Jews favorably, and he quickly established relationships with the leadership of Jewish Palestine.

He recognized that the Jews had their own effective self-defense forces, that they were highly motivated, and he thought with the proper training they could stop the irregular attacks by adopting offensive tactics.

Wingate was only a Captain, though, and his innovative ideas were not taken seriously by his superiors.

Finally, in 1938, one idea of his was given a trial run. He was allowed to attempt a disruption of Arab efforts- going on the offensive at night, with a combined Jewish-British force, and they ambushed some Arab irregulars and prevented an attack on a British base. From this modest beginning he was allowed by Lieutenant General Archibald Wavell to organize a force of 100 men including 36 British soldiers, some police, and some young Jewish fighters. The Special Night Squadrons (SNS) were organized into 3 teams, and the began training intensively in June 1938.

Captain Wingate was an unconventional individual, and the training was unconventional. He led the new SNS teams in hikes of many miles thru the night, sometimes sitting all night at the outskirts of an Arab village and teaching the recruits to remain undetected, and to be confident of their ability to operate at night with an edge. He always led these operations personally, and he had very high standards for individual competence. In short, his idea worked, and the SNS were a huge success. By the end of the Arab Revolt, they had lost only 2 dead, and had inflicted about 1/3 of all the Arab military casualties in the entire campaign.

The Arabs became terrified to operate at night, and the pipeline became secure for the first time since the revolt had entered the most intense phase. Moshe Dayan, future Israeli Chief of Staff, Zvi Brenner, who was an important officer in the Jewish Brigade during WW II, and Yigal Allon, first commanding officer of the Palmach, were all trained by Wingate in his unconventional tactics. Brenner said- “He taught us everything we know.”

While on leave in England in May of 1939, Wingate was interviewed, and did not attempt to hide his strong Zionist feelings. He openly advocated for the establishment of a Jewish State. In response, his superiors changed his assignment, and stamped his passport: ‘Not allowed to enter Palestine.’

During WW2 he was sent first to Ethiopia, where he established a guerilla force he named after the biblical hero Gideon, which included some former Special Night Squadron veterans , including Jews. His results were spectacular here as well. He placed the Emperor Haile Selassie, who had been removed from his throne by the Italians, back in power, and eventually his 1700 men forced the surrender of 20,000 Italian troops. Later in the war, he was promoted to Major General and placed in command of a force of mainly Indian Troops fighting the Japanese in Burma. The ‘Chindit Army’ conducted two major irregular infiltration campaigns against the Japanese and ultimately tied down enough troops that the Japanese attempt to take India failed.

Few Americans today remember how important that theater of the war was to the British Empire, since many in India would have welcomed a Japanese victory. General Wingate died at the age of 41 (24 March 1944) when the American B-25 he was flying in crashed in bad weather. He was eventually buried in Arlington National Cemetery, since the remains of the crew could not be individually identified, and the majority of the bomber’s crew were Americans.

His life had two major legacies- Most WW2 special forces doctrine was heavily influenced by his groundbreaking training and tactics first employed by the Special Night Squadrons in Palestine. The British Special Air Squadrons (SAS) and American Special Forces were also indebted to the tactics Wingate employed in Ethiopia and Burma. Anyone who goes through an elite training program today anywhere in the world will recognize some of the tactics pioneered by Orde Wingate.

In Israel, there is another legacy, though, to the man known in Hebrew as ‘Ha Yedid’ (The Friend). Every IDF officer goes through special physical training at the Wingate training center in Israel. There are many streets and buildings named for him. The greatest legacy is that the specialness of the IDF, the thing that makes the Israeli Army different from other countries, can also be traced to him.

The original article was posted by The Israel Forever Foundation and can be found here.

We would love to hear from you! Please fill out this form and we will get in touch with you shortly.
Trending Z
News March 13, 2018
ZOA Condemns U.S. State Dept. & U.S. Amb. Nides For Siding with Antisemitic, Discriminatory Palestinian & Hamas Terrorists re: the Temple Mount, Violating Jews’ Religious Freedom
Uncategorized March 13, 2018
FLASH: ISRAEL-JORDAN PEACE TREATY (1994) GUARANTEES JEWS ACCESS TO THE TEMPLE MOUNT – LET MY PEOPLE PRAY
Uncategorized March 13, 2018
ZOA Analysis: Most American Rabbis Who Are Boycotting Some Israeli Ministers Are From Extremist Left Wing Groups (J Street; T’ruah; JVP)
Uncategorized March 13, 2018
Israel’s “Right of Return” Grandparent Clause is De-Judaizing the Jewish State – Eliminate It
Center for Law & Justice
We work to educate the American public and Congress about legal issues in order to advance the interests of Israel and the Jewish people.
We assist American victims of terrorism in vindicating their rights under the law, and seek to hold terrorists and sponsors of terrorism accountable for their actions.
We fight anti-Semitism and anti-Israel bias in the media and on college campuses.
We strive to enforce existing law and also to create new law in order to safeguard the rights of the Jewish people in the United States and Israel.
Our Mission
ZOA STATEMENT
The ZOA speaks out for Israel – in reports, newsletters, and other publications. In speeches in synagogues, churches, and community events, in high schools and colleges from coast to coast. In e-mail action alerts. In op-eds and letters to the editor. In radio and television appearances by ZOA leaders. Always on the front lines of pro-Israel activism, ZOA has made its mark.
Related Articles
OP-ED BY: Michael Goldblatt ZOA: Pal. Lies & Denial About Jewish Connection & Rights in J’lem Must Stop Now

Dr. Michael Koplow in his commentary in the Jewish News (“Nothing is Black and White,” June 30, page 5) compares the actions of the Orlando terrorist Omar Mateen to those of Baruch Goldstein, who killed 29 Muslim worshipers in a Hebron mosque in 1994. To Dr. Koplow there is a moral equivalency as religion was […]