Shmuley Boteach has written numerous recent articles, tweets and ads condemning and calling out top pro-Israel Jewish and Zionist leaders for meeting Qatari officials, even though they were simply making demands on Qatar to change its policies towards Israel and the Jewish people.

Yet last week, in contradiction of this “principled” stance, he honored and gave his organization’s award“for combating terrorism and those who finance it” to U.S. Treasury Secretary Steven Mnuchin, who has praised the Persian Gulf country for “ensuring that Qatar is a hostile environment for terrorist financing.” 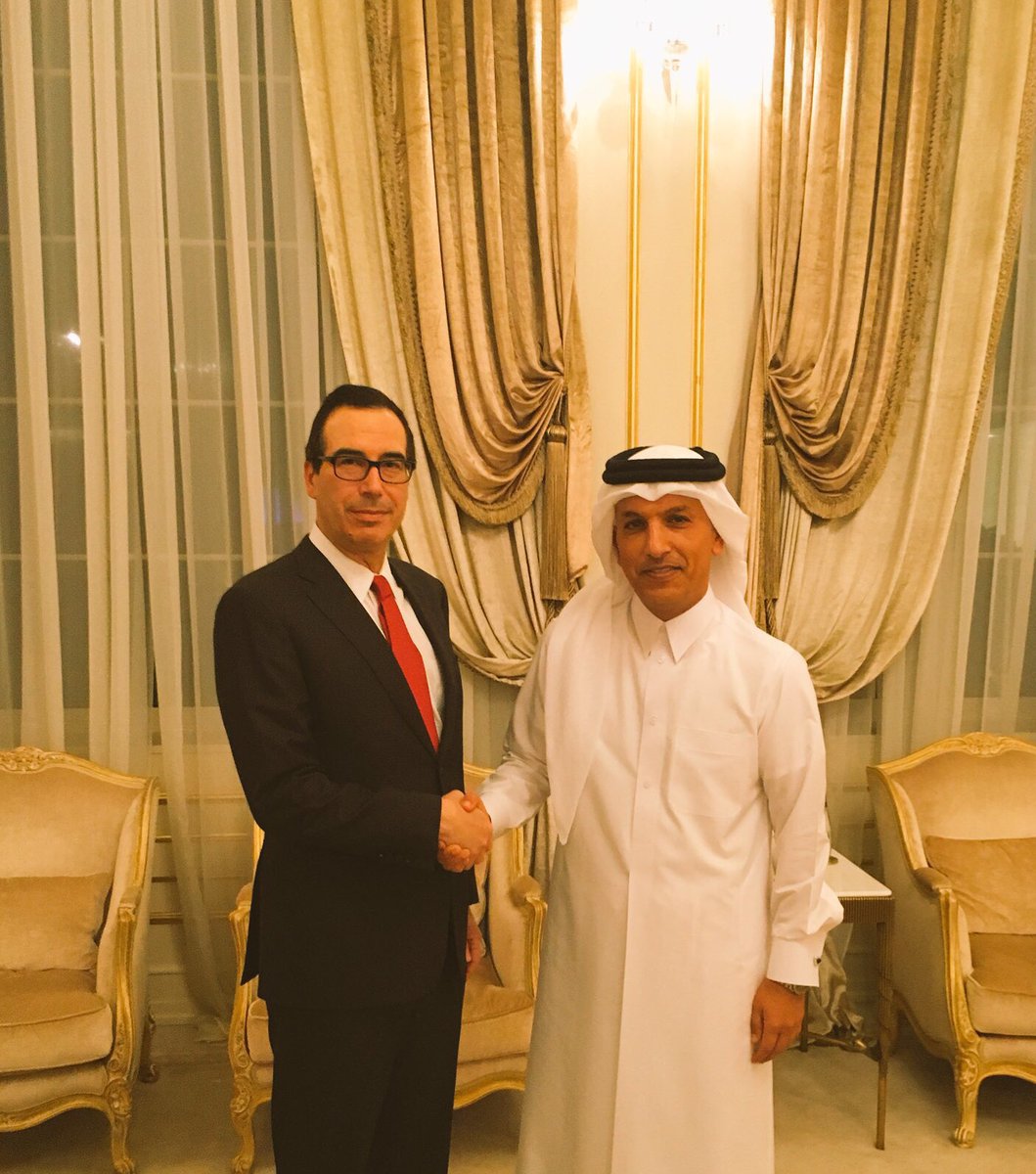 (I am not suggesting that Mnuchin did not justly deserve the award; only that under Boteach’s criteria for criticism, as applied to Jewish and Zionist leaders, traveling to or praising Qatar by anyone, according to Boteach, should be completely unacceptable.)

In a joint statement released by the U.S. Treasury Department on Oct. 30, 2017, following a meeting between Mnuchin, the Emir and other top Qatari officials, Mnuchin praised Qatari-U.S. “robust ties”; praised Qatari “improvements initiated in the past several months, outlined in the July 11, 2017 Memorandum of Understanding between the two countries on counterterrorism financing cooperation”; and further stated:

“We agreed to enhance our cooperation to counter the financing of terrorism in key areas of mutual concern including by substantially increasing the sharing of information on terrorist financiers in the region, placing greater emphasis on charitable and money service business sectors in Qatar to prevent terrorists from continuing to use those sectors for illicit financing purposes, developing a Qatari domestic designations regime in line with international standards and taking joint actions against terrorist financiers. We affirm that the United States and Qatar will significantly increase our cooperation on these issues [countering terrorism financing] to ensure that Qatar is a hostile environment for terrorist financing.”

Mnuchin’s praise of Qatar was joined by President Donald Trump, U.S. Secretary of State Rex Tillerson and U.S. Secretary of Defense James N. Mattis. On Jan. 15, 2018, President Trump “thanked the Emir for Qatari action to counter terrorism and extremism in all forms, including being one of the few countries to move forward on a bilateral memorandum of understanding.” On Feb. 28, 2018, President Trump “thanked the Emir for his leadership in highlighting ways all Gulf Cooperation Council states can better counter Iranian destabilizing activities and defeat terrorists and extremists.” President Trump and the Emir of Qatar are scheduled to meet again in April.

Additionally, on Jan. 30, 2018, at the High-Level Opening Session of the Inaugural U.S.-Qatar Strategic Dialogue, Tillerson stated: “With respect to counterterrorism, following President Trump’s challenge to all of our Gulf partners during the Riyadh summit last year, Qatar has made significant progress to improve efforts to combat terrorism.”

Moreover, Israel has over the past few years sent handball teams, as well as tennis and volleyball players, to Qatar—all of whom were properly welcomed and hosted in a fashion pretty much unseen in any other Arab country.

Surprisingly, though, Boteach has never criticized top U.S. officials’ statements praising Qatar or Israel sending Israeli athletes there. To the contrary, Boteach has written dozens of articles, tweets and other postings condemning Jewish and pro-Israel leaders who have not praised Qatar, but made demands on Qatar which would benefit Israel and the Jewish people.

For instance, Boteach accused Jewish and pro-Israel leaders of giving Qatar “credibility.” But surely, top U.S. officials are capable of providing far more credibility than American Jewish leaders can. Yet Boteach has never criticized the “credibility” U.S. officials may have given to Qatar; and, ironically, Boteach added to that credibility by conferring the “countering terrorism” award on the U.S. Treasury Secretary.

Boteach also even speciously claimed that a group of Jewish leaders, who went to Qatar with a list of demands on Qatar (including demands to end terror funding), were “condoning [Hamas’s] murder of Jews” because Qatari leaders allegedly fund Hamas (which Qatar publicly denies). If, however, meeting with Qatari officials condones murder, why has Boteach only attacked Jewish and Zionist leaders, and not listed others, including U.S. officials, in any of his umpteen tweets and articles?

Perhaps Boteach has never mentioned U.S. public officials’ statements praising Qatar because, perhaps rightly, those statements give credence to the possibility that Qatar may be trying to change, and also give credence to the fact that Jewish and pro-Israel leaders’ meetings in Qatar were, in fact, for the purpose of pushing Qatari officials further along the path of legitimate and warranted change.

He also minimized important successes and potential successes that have come from these Jewish leaders’ meetings, including, specifically, the Emir’s promise to ZOA President Morton Klein to remove anti-Semitic books from the influential Doha book fair, which could ripple through the Arab world.

Another potential positive outcome from these meetings is the (hopefully permanent) cancellation of a harmful and anti-Semitic, anti-Israel Al Jazeera video documentary series that maliciously attacks the so-called “Jewish lobby” with falsehoods and distortions. Al Jazeera “investigative” journalist Clayton Swisher (who is currently on sabbatical from Al Jazeera), recently complained:“I have to admit that someone has been hard at work putting the kibosh on our film.”

Klein’s recent negotiations with Qatar officials in the last few weeks on this Al Jazeera documentary film issue, as well as his exhaustive and numerous meetings in Qatar with the Emir and other top officials, were a major factor in “kiboshing” that scurrilous anti-Semitic film.

Klein will also be pushing for other items on ZOA’s report and list of demands to Qatar—and those demands are, and should be, of particular concern to the Jewish, Israeli and American people.  What should have been called for from Boteach was some appreciation for the ZOA president and other Jewish leaders’ courageous efforts, rather than unfairly attempting to belittle him and the other dedicated Jewish American leaders for no good cause and no good reason.

Mark Levenson, national secretary and a member of the executive committee of the Zionist Organization of America (ZOA), has long advocated for the State of Israel and played an important role in passage of the New Jersey Anti-BDS legislation.

This article was published by JNS and may be found here.

We would love to hear from you! Please fill out this form and we will get in touch with you shortly.
Trending Z
News March 16, 2018
ZOA Condemns U.S. State Dept. & U.S. Amb. Nides For Siding with Antisemitic, Discriminatory Palestinian & Hamas Terrorists re: the Temple Mount, Violating Jews’ Religious Freedom
News March 16, 2018
ZOA’s Klein JPost Op-Ed: There is Nothing Extreme About Israel’s New Government
Uncategorized March 16, 2018
FLASH: ISRAEL-JORDAN PEACE TREATY (1994) GUARANTEES JEWS ACCESS TO THE TEMPLE MOUNT – LET MY PEOPLE PRAY
Uncategorized March 16, 2018
ZOA Analysis: Most American Rabbis Who Are Boycotting Some Israeli Ministers Are From Extremist Left Wing Groups (J Street; T’ruah; JVP)
Center for Law & Justice
We work to educate the American public and Congress about legal issues in order to advance the interests of Israel and the Jewish people.
We assist American victims of terrorism in vindicating their rights under the law, and seek to hold terrorists and sponsors of terrorism accountable for their actions.
We fight anti-Semitism and anti-Israel bias in the media and on college campuses.
We strive to enforce existing law and also to create new law in order to safeguard the rights of the Jewish people in the United States and Israel.
Our Mission
ZOA STATEMENT
The ZOA speaks out for Israel – in reports, newsletters, and other publications. In speeches in synagogues, churches, and community events, in high schools and colleges from coast to coast. In e-mail action alerts. In op-eds and letters to the editor. In radio and television appearances by ZOA leaders. Always on the front lines of pro-Israel activism, ZOA has made its mark.
Related Articles
OP-ED BY: Morton A. Klein and Elizabeth Berney, Esq. ZOA Op-Ed in FORWARD: ZOA Supporting Trump Refugee Ban is Moral Imperative

The left’s confusion about what constitutes “morality” compels us to respond to Forward editor Jane Eisner’s criticism of Zionist Organization of America because ZOA supports President Trump’s executive order titled “Protecting The Nation From Foreign Terrorist Entry Into The United States.” Most Americans, according to a recent Rasmussen poll, agree with ZOA: Americans overwhelmingly favor Trump’s […]

It was exhilarating to watch US President Donald Trump, at his press conference with Israeli Prime Minister Benjamin Netanyahu, refuse to parrot the tired, irrational, dangerous mantra that a Palestinian state is the only option for peace. Instead, Trump wisely spoke about real peace; creative solutions; ending the Palestinian-Arabs’ teaching of “tremendous hate” to their […]