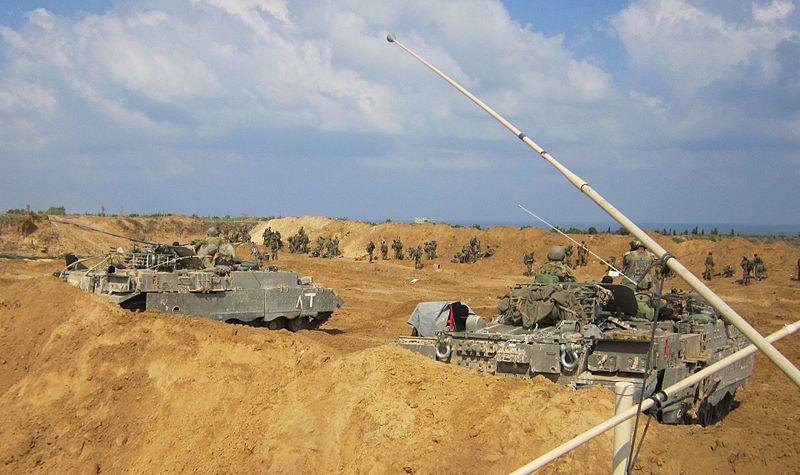 The Israeli Defense Forces (IDF)’s necessary, carefully targeted, defensive response to hordes of Hamas-sponsored terrorists and rioters attempting to charge through the Gaza-Israel border has once again demonstrated that, in the words of British Commander Colonel Richard Kemp, the IDF is “the world’s most moral army.”  However, frighteningly and horrifyingly, a cabal of leftists – Sen. Bernie Sanders, J Street and other hostile-to-Israel NGO’s, the Pope, the UN, etc. have all attacked Israel for defending herself.  It is painful and frightening that in 2018, irrational Jew-hatred still remains so strong that although the Jewish state is fighting against the Nazi-like Arab terrorist group Hamas, whose charter and proclamations call for the murder of Jews and Israel’s destruction, the world and U.S. politicians show sympathy and support for the Hamas terrorists.

What country on earth would not use military force against an avowed terrorist enemy who comes to their border, 40,000-strong, with guns, bombs and burning tires, to infiltrate their country in order to kill innocent civilians and damage their security infrastructure, after warning the terrorists to refrain from such terrorist actions?   And, Hamas openly stated this was a riot to promote the policy of bringing millions of so-called “Arab refugees” to Israel in order to destroy the Jewish State. This was not a peaceful protest for better living conditions!

This terrorist action also makes it even more clear that Israel dare not give any more land to the Palestinian terrorist dictatorship. They will only be used as enclaves for more terrorism and rockets against Israel.

This terrorist action also makes it even more clear that Israel dare not give any more land to the Palestinian terrorist dictatorship. They will only be used as enclaves for more terrorism and rockets against Israel.

Fortunately, the Trump administration understands the situation.  ZOA thanks U.S. Ambassador to the U.N. Nikki Haley and the administration for blocking a draft UN Security Council wrongly blaming Israel, urging “investigations” of the IDF, and reaffirming a supposed “right of peaceful protest” – when the acts of Hamas and the Hamas-sponsored hordes were anything but peaceful.  (See “US blocks UN Resolution Condemning Israel for Deaths in Gaza Clashes,” by AFP and Khaled Abu Toameh, Times of Israel, Apr. 1, 2018.)

U.S.-designated foreign terrorist organization Hamas is once again engaging in its favorite tactic of using civilians as human shields for terror activities aimed at carrying out Hamas’s stated goals of invading Israel, destroying the Jewish state, and murdering every Jew.  This past weekend, Hamas bussed paid mobs of 30,000 to 40,000 Palestinian-Arab rioters to six locations on Israel’s border.  Hamas leader Ismail Haniyeh announced in a speech at the scene that this marked the beginning of the Palestinians’ “return” to all of “Palestine.”  At Hamas’ urging, the amassed rioters hurled Molotov cocktails (burning bottle-bombs filled with gasoline and other flammable materials), burning tires, boulders, and other projectiles at Israel, and made coordinated attempts to storm the border.  Hamas also sent children, including a seven-year-old girl, into the line of fire.  Meanwhile, armed Hamas, Palestinian Islamic Jihad (PIJ) and Fatah al-Aqsa Martyrs Brigade terrorists shot guns and rockets into Israel, and attempted to infiltrate into Israel.

Hamas also reiterated the tenet of the Hamas Charter that Hamas will never make peace with Israel, and stated that its violent attempted terror invasion (misnamed “the Great Return March” or “Gaza Return March”), timed to begin on the Jewish holiday of Passover, will continue for six weeks, through the 70th anniversary of Israel re-establishment in mid-May, and will include additional actions afterwards, plus worldwide “supporting” actions led by Hamas/Muslim Brotherhood affiliates in Turkey, Europe and elsewhere.  Hamas and its parent organization, the Muslim Brotherhood – which cry “poverty” when it comes to taking care of civilian needs such as water purification and electricity repairs – have reportedly spent over $10 million on this campaign to storm Israel’s borders and thwart peace.  (“Are Muslim Brotherhood and Hamas Mobilizing to Take Over the PLO?,” by Ehud Rosen, Jerusalem Center for Public Affairs, JNS, Mar. 26, 2018.)  Journalist Bassam Tawil aptly summed it up, noting: “the ‘March of Return’ is nothing but a declaration of war on Israel and the Trump administration.”  (“Palestinians: A March to Destroy Israel,” by Bassam Tawil, Gatestone Institute, Apr. 2, 2018.)

The Israeli Defense Forces (IDF) has responded admirably.  Israel issued multiple warnings to Palestinian-Arabs to not approach the border.  At great risk to themselves, IDF soldiers rescued the 7-year-old Palestinian-Arab girl whom craven Hamas operatives had placed in the line of fire.  The IDF returned the child to her family.  Israel stopped Hamas infiltration attempts, and Israeli snipers specifically targeted terrorists and those in danger of breaching the border, leaving the mass of Hamas-instigated rioters completely unharmed – even based on Hamas’s vastly overstated injury claims of 750 injuries.  A total of only approximately 17 Palestinian-Arabs were killed.  The IDF and Shin Bet confirmed that at least 10 of those killed were armed, known terrorists, including Hamas commanders and Nuchba special forces (usually famous for sub-terrain activities).  Further confirming this, Hamas’ Al Qassam Brigades published photos of five of its terrorists who were killed in the violence this past weekend.  Further, a picture of 10 “Terrorists of the Violent Riots,” with basic information about each of them, can be viewed on Prime Minister Netanyahu’s Facebook page.  (The deceased terrorists included a Hamas commander, 7 other elite Hamas military operatives, a global jihad operative and a Fatah al Aqsa Martyrs brigade operative.)  Moreover, the remaining 7 fatalities were all men of military age.

The IDF’s restraint in the face of this mass provocation and danger is remarkable.  Any other nation facing hordes of terrorists’ and violent rioters’ efforts to storm its borders would have used far greater force.

Yet, appallingly, Israel and Jew-haters are once again encouraging the terrorists and condemning Israel for defending herself.  For instance:

The hostile-to-Israel J Street falsely claimed that “the vast majority [of Palestinian-Arabs] marched and protested non-violently,” portrayed such demonstrations were “legitimate and important,” mourned the death of the “17 Palestinians” (while failing to properly identify them as armed terrorists); falsely claimed that there “were a disturbingly high number of casualties,” and demanded investigations and restraint by Israel.  This is, alas, J Street’s typical response whenever Israel must defend herself from violent attacks by Hamas from Gaza.  (See “ZOA Report: J-Street Sides with Israel’s Enemies & Works to Destroy Support for Israel,” Executive Summary and Full Report.)

ZOA is proud of Israel and the IDF for handling this dangerous situation so well.

We would love to hear from you! Please fill out this form and we will get in touch with you shortly.
Trending Z
News April 2, 2018
ZOA Condemns U.S. State Dept. & U.S. Amb. Nides For Siding with Antisemitic, Discriminatory Palestinian & Hamas Terrorists re: the Temple Mount, Violating Jews’ Religious Freedom
News April 2, 2018
ZOA’s Klein JPost Op-Ed: There is Nothing Extreme About Israel’s New Government
Uncategorized April 2, 2018
FLASH: ISRAEL-JORDAN PEACE TREATY (1994) GUARANTEES JEWS ACCESS TO THE TEMPLE MOUNT – LET MY PEOPLE PRAY
Uncategorized April 2, 2018
ZOA Analysis: Most American Rabbis Who Are Boycotting Some Israeli Ministers Are From Extremist Left Wing Groups (J Street; T’ruah; JVP)
Center for Law & Justice
We work to educate the American public and Congress about legal issues in order to advance the interests of Israel and the Jewish people.
We assist American victims of terrorism in vindicating their rights under the law, and seek to hold terrorists and sponsors of terrorism accountable for their actions.
We fight anti-Semitism and anti-Israel bias in the media and on college campuses.
We strive to enforce existing law and also to create new law in order to safeguard the rights of the Jewish people in the United States and Israel.
Our Mission
ZOA STATEMENT
The ZOA speaks out for Israel – in reports, newsletters, and other publications. In speeches in synagogues, churches, and community events, in high schools and colleges from coast to coast. In e-mail action alerts. In op-eds and letters to the editor. In radio and television appearances by ZOA leaders. Always on the front lines of pro-Israel activism, ZOA has made its mark.
Related Articles
OP-ED ZOA Mourns Passing of Ariel Founder & Visionary, Ron Nachman