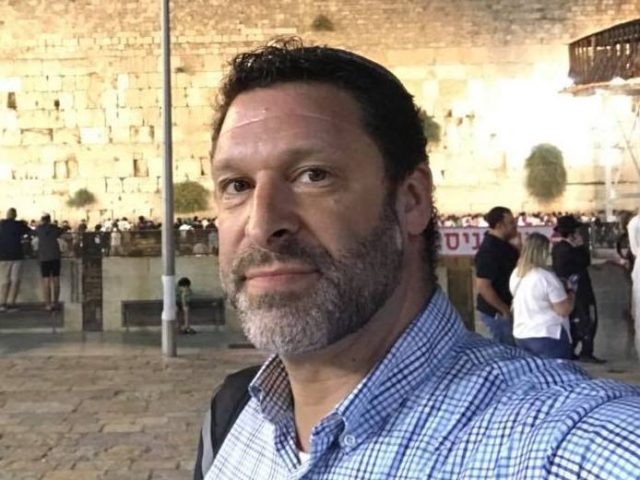 The ZOA joins thousands of Israelis, Americans and Jews throughout the world in mourning an extraordinary Jewish patriot, American-Israeli Jew Ari Fuld, father of four children, who was murdered in cold blood this weekend at the Gush Etzion shopping center’s parking lot, south of Jerusalem.  Many members and friends of ZOA knew Ari, and have been sending us their memories about his love for Israel, his incredible bravery and his important work to stop the defamation of Israel.

Governor Mike Huckabee summed it up on twitter:  “My friend Ari Fuld (w/ me in photo) an American/Israeli patriot was murdered in cold blood today by young Palestinian terrorist who stabbed Ari IN THE BACK. Despite being stabbed, Ari chased and shot the coward, who lived. Ari died. I was with Ari in July in Efrat. #heartbroken.” and “Senseless gutless murder today of Ari Fuld in Efrat, Israel.  This is savage!  Ari stabbed in back. I was just with him in July. I’m sickened by this.”

Ari Fuld’s murder, by a 16-year-old Palestinian-Arab Islamist terrorist, the despicable monster Khalil Jabarin, once again shows the horrific results of the Palestinian Authority (PA)’s anti-Semitic indoctrination and poisoning of its youth, and the PA’s paying Arabs to murder Jews. Despicable monster Jabirin was incited to murder Jews by Mahmoud Abbas’ latest falsehood, that Israel was allowing Jews to pray on the Temple Mount, which was widely broadcasted a few hours before this terrorist attack.  (See “Mahmoud Abbas: Fresh American Blood on His Hands: Abbas’s Responsibility for Murder,” by Bassam Tawil, Gatestone Institute, Sept. 17, 2018).

Abbas similarly incited the 2015-2018 “knife intifada” wave of terror, in which Palestinian-Arab terrorists stabbed, shot and rammed to death 67 innocent Israelis and Americans and wounded 1008 innocent Israelis and Americans, by repeatedly broadcasting Abbas’ false anti-Semitic accusation that Jews and Christians are “defiling” the the Al Aqsa mosque with their “filthy feet,” and praising Palestinian-Arabs for spilling blood – and continuing to pay terrorists to murder Jews and Americans. The PA’s (and Hamas’, and Palestinian Islamic Jihad (PIJ)’s) constant anti-Israel, anti-Semitic incitement in schools, on television, on social media, and state-controlled mosques – has turned too many in the young generation into Jew-hating Nazi-like terrorists.

At the Gush Etzion shopping center, teenage terrorist Jabirin first ordered a falafel from Hila Peretz, a female Jewish falafel-maker at the shopping center, argued with her about the price, ate his falafel, hanged out in the parking lot for an hour, and then mortally stabbed Ari Fuld in the back, and stabbed the Jewish falafel maker who had just served him.  Ari saved the falafel maker’s life, by running after the terrorist and shooting him, despite Ari’s mortal wounds, before Ari collapsed and died from his wounds.  Ari Fuld was truly a hero, even in the last moments of his too-short life.  (See, e.g. “Ari Fuld, a Fighter for Israel in Life and in Death,” by Caroline Glick, Sept. 17, 2018; “Israeli Terror Victim Shot Assailant Before Dying,” by Tovah Lazaroff, Jerusalem Post, Sept. 17, 2018.)

Terrorist Jabarin is now recuperating in Hadassah Hospital, and being hailed as a hero and victim by the PA, Hamas and PIJ – while Ari Fuld’s father, widow and four children, and all of us, are left bereft, to mourn.  (See, e.g., “Thousands Mourn Ari Fuld, Prominent Israel Activist Stabbed to Death by Palestinian,” JTA, Sept. 17, 2018; “PA Says Teenage Killer Who Murdered Israeli Was Victim,” by Itamar Marcus and Nan Jacques Zilberdik, PMW, Sept. 17, 2018.)

ZOA urges Israel to take the strongest possible action in response to this latest horrific murder of Jews. Among other steps, ZOA urges Israel to immediately build a new community in Judea/Samaria, to be named after Ari Fuld, and to name the streets therein against other victims of Palestinian-Arab murder.

ZOA also urges all Americans to support the recent important, praiseworthy actions of the Trump administration’s Education Department, Office of Civil Rights (OCR), led by Kenneth Marcus, to properly define anti-Semitism to include the many instances when “anti-Zionism” and “anti-Israelism” is really a pretext or code word for Jew-hatred.  The OCR must continue these important efforts to stop the virulent anti-Semitic “anti-Zionist” activities on our American college campuses, which could, G-D forbid, instigate the hateful violence that Palestinian-Arab youth are perpetrating against innocent Jews and Americans in Israel.

We would love to hear from you! Please fill out this form and we will get in touch with you shortly.
Trending Z
News September 17, 2018
ZOA Condemns U.S. State Dept. & U.S. Amb. Nides For Siding with Antisemitic, Discriminatory Palestinian & Hamas Terrorists re: the Temple Mount, Violating Jews’ Religious Freedom
News September 17, 2018
ZOA’s Klein JPost Op-Ed: There is Nothing Extreme About Israel’s New Government
Uncategorized September 17, 2018
FLASH: ISRAEL-JORDAN PEACE TREATY (1994) GUARANTEES JEWS ACCESS TO THE TEMPLE MOUNT – LET MY PEOPLE PRAY
Uncategorized September 17, 2018
ZOA Analysis: Most American Rabbis Who Are Boycotting Some Israeli Ministers Are From Extremist Left Wing Groups (J Street; T’ruah; JVP)
Center for Law & Justice
We work to educate the American public and Congress about legal issues in order to advance the interests of Israel and the Jewish people.
We assist American victims of terrorism in vindicating their rights under the law, and seek to hold terrorists and sponsors of terrorism accountable for their actions.
We fight anti-Semitism and anti-Israel bias in the media and on college campuses.
We strive to enforce existing law and also to create new law in order to safeguard the rights of the Jewish people in the United States and Israel.
Our Mission
ZOA STATEMENT
The ZOA speaks out for Israel – in reports, newsletters, and other publications. In speeches in synagogues, churches, and community events, in high schools and colleges from coast to coast. In e-mail action alerts. In op-eds and letters to the editor. In radio and television appearances by ZOA leaders. Always on the front lines of pro-Israel activism, ZOA has made its mark.
Related Articles
OP-ED BY: ZOA Staff ZOA Sends Heartfelt Condolences to the Victims of Islamist Terrorist Attack in France

Zionist Organization of America (ZOA) President Morton A. Klein released the following statement: ZOA sends our heartfelt condolences to the families of the 84 innocent people, including 15 children, who were murdered in the truck attack in Nice, France yesterday by radical Islamist Mohamed Lahouaiej-Bouhlel.   ZOA also sends our prayers for recovery to the 188 […]

The Zionist Organization of America (ZOA) has praised the Jewish Federations of North America (JFNA), the umbrella organization which includes the Council of Jewish Federations, the United Jewish Appeal and the United Israel Appeal, for ending a 50-year old ban on permitting its representatives to conduct official visits to Jewish communities in Judea/Samaria. Six hundred […]