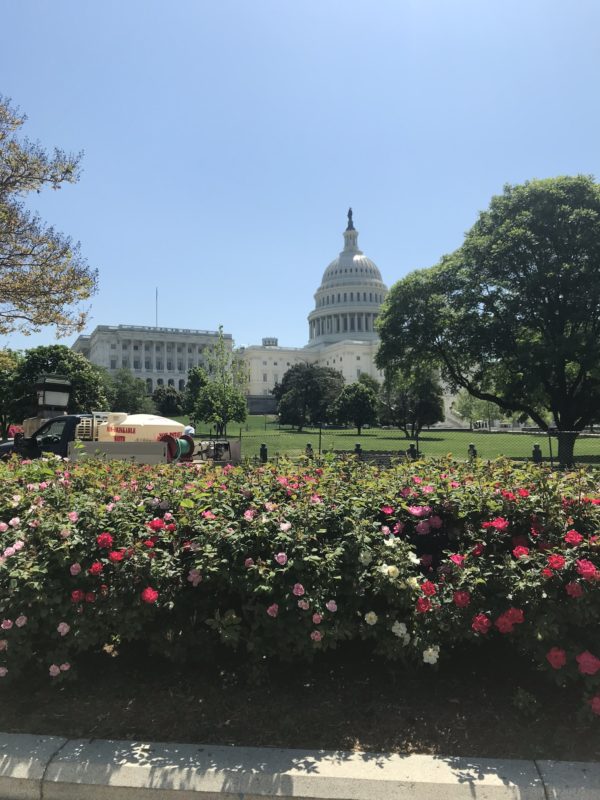 The Zionist Organization of America (ZOA) commended Congress for passing the Anti-Terrorism Clarification Act of 2018 (ATC Act), and praised President Trump for signing it into law yesterday. The ZOA strongly advocated for this much-needed legislation, which will close loopholes in the Anti-Terrorism Act of 1992, and help American victims of terrorism abroad to hold their terrorist attackers accountable.

Dan Pollak and Josh London, co-directors of the ZOA’s Government Relations Department, met with lawmakers to discuss this important bipartisan legislation and seek their support for it.  Last July, the ZOA submitted a letter to the Senate Judiciary Committee urging the Committee’s support of then bill S. 2946.

ZOA strongly advocated for this much-needed legislation, which will close loopholes in the Anti-Terrorism Act of 1992, and help American victims of terrorism abroad to hold their terrorist attackers accountable.

The ATC Act accomplishes the following:

1. It ends the “acts of war” exemption in the 1992 law, which enabled some defendants, accused of aiding and abetting terrorism, to shield themselves from civil liability.  The ATC Act makes it clear that the “acts of war” defense does not apply to acts carried out by any entity designated by the U.S. government as a foreign terrorist organization.

2.  It gives victims of drug-related terrorist activity a way to satisfy judgments they obtain under the 1992 law.  Up to this point, assets frozen under the Foreign Narcotics Kingpin Designation Act were not available to terror victims who secured a judgment under the 1992 law.

3. It restores the jurisdiction of U.S. courts in foreign terrorism cases – as Congress intended – over defendants who are taking advantage of certain benefits provided to them by the U.S. government.  After the U.S. Supreme Court declined to review the lower court’s decision in Sokolow v. Palestine Liberation Organization, terror victims were faced with almost impossible jurisdictional hurdles to satisfy in order to proceed against foreign defendants under the 1992 law.  Under the ATC Act, if a defendant accepts U.S. foreign assistance or operates an office inside the U.S., then – as a condition of accepting those privileges – the defendant is deemed to have consented to personal jurisdiction in lawsuits brought under the 1992 law.

ZOA National President Morton A. Klein commended Congress and President Trump for this crucial new law, stating:  “The ZOA has a long history of standing up for American victims of international terrorism.  We were committed to focusing our efforts on making sure this legislation became law.  The ATC Act will help deter support for terrorism, it will help hold terrorists accountable, and it will help American terror victims get the justice they deserve.”

We would love to hear from you! Please fill out this form and we will get in touch with you shortly.
Trending Z
News October 4, 2018
ZOA Deplores that Pres. Trump Dined with Jew-Haters Kanye West & Nick Fuentes, and Demands he Condemn Them
Uncategorized October 4, 2018
ZOA Honors Trump With Rarely Given Herzl Award for His Great Pro-Israel Work – Joins Ranks of Balfour, Truman, Begin, Meir, Ben-Gurion
News October 4, 2018
ZOA Responds to Questions About Pres. Trump, Kanye West, Fuentes, etc. Issue
Uncategorized October 4, 2018
Zionist Organization of America Honors Donald Trump for Support for Israel, Jewish Community
Center for Law & Justice
We work to educate the American public and Congress about legal issues in order to advance the interests of Israel and the Jewish people.
We assist American victims of terrorism in vindicating their rights under the law, and seek to hold terrorists and sponsors of terrorism accountable for their actions.
We fight anti-Semitism and anti-Israel bias in the media and on college campuses.
We strive to enforce existing law and also to create new law in order to safeguard the rights of the Jewish people in the United States and Israel.
Our Mission
ZOA STATEMENT
The ZOA speaks out for Israel – in reports, newsletters, and other publications. In speeches in synagogues, churches, and community events, in high schools and colleges from coast to coast. In e-mail action alerts. In op-eds and letters to the editor. In radio and television appearances by ZOA leaders. Always on the front lines of pro-Israel activism, ZOA has made its mark.
Related Articles
OP-ED ZOA: Correcting the Record About Abe Foxman’s False Statement About ZOA Gala Dinner

My friend David Friedman has the potential to be the greatest US Ambassador to Israel ever. He thoroughly understands the detailed tragic reality of the Arab/Islamic war against Israel. He has a powerful grasp of Israel’s defense needs, the dangers they face, and the danger now of a Hamas/PA State. No previous ambassador appreciates the […]