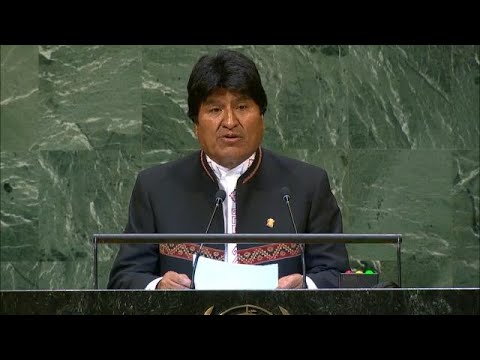 Please call, write, fax, email, tweet the Bolivian Ambassador to the UN Sacha Llorenty, who is the current rotating president of the U.N. Security Council for October, to protest his abuse of that position to invite the virulent anti-Israel propaganda group B’Tselem to address the UN Security Council today.

The foreign-funded B’Tselem specializes in spreading false accusations against Israel.  For instance, B’Tselem’s falsehoods were the major basis for the infamous Goldstone report – the same report which Judge Goldstone later retracted.  B’Tselem ignores horrific Palestinian-Arab terrorism and incitement and murders of Jews, and instead blames and condemns Israel for legitimate self-defense. B’Tselem’s anti-Israel propaganda activities are well documented by NGO Monitor at https://www.ngo-monitor.org/ngos/b_tselem/

Please let Bolivian officials know that inviting anti-Israel propaganda groups such as B’Tselem is wholly unacceptable.   Please copy ZOA (mklein@zoa.org) on your emails and let us know about any response.  See Sample email or voicemail and address information below:

I strongly protest the Bolivian Ambassador to the UN’s invitation to the foreign-funded anti-Israel propaganda group B’Tselem to speak at the United Nations Security Council tomorrow.  B’Tselem spreads unverified falsehoods to smear the democratic state of Israel and Israel’s defense forces.  For instance, B’Tselem’s falsehoods were the major basis for the infamous Goldstone report – the same report which Judge Goldstone later retracted. B’Tselem ignores horrific Palestinian-Arab terrorism and incitement and murders of Jews, and instead blames and condemns Israel for legitimate self-defense.  B’Tselem’s anti-Israel propaganda activities are also well documented by NGO Monitor at https://www.ngo-monitor.org/ngos/b_tselem/

Israel’s UN Ambassador Danny Danon properly stated that the Bolivian ambassador’s UN invitation to B’Tselem:  “crosses redlines for those foreign countries with an anti-Israel agenda that finance and then invite [B’Tselem] to give testimony again us. We will expose not only Palestinian incitement and lies, but also those of [B’Tselem Executive Director] Hagai El-Ad and B’Tselem. We will continue to defend Israel and the truth.”

Shame on the Bolivian Ambassador for his invitation to B’Tselem

Permanent Mission of Bolivia to the United Nations

The Embassy of Bolivia

We would love to hear from you! Please fill out this form and we will get in touch with you shortly.
Trending Z
News October 18, 2018
ZOA Condemns U.S. State Dept. & U.S. Amb. Nides For Siding with Antisemitic, Discriminatory Palestinian & Hamas Terrorists re: the Temple Mount, Violating Jews’ Religious Freedom
News October 18, 2018
ZOA’s Klein JPost Op-Ed: There is Nothing Extreme About Israel’s New Government
Uncategorized October 18, 2018
FLASH: ISRAEL-JORDAN PEACE TREATY (1994) GUARANTEES JEWS ACCESS TO THE TEMPLE MOUNT – LET MY PEOPLE PRAY
Uncategorized October 18, 2018
ZOA Analysis: Most American Rabbis Who Are Boycotting Some Israeli Ministers Are From Extremist Left Wing Groups (J Street; T’ruah; JVP)
Center for Law & Justice
We work to educate the American public and Congress about legal issues in order to advance the interests of Israel and the Jewish people.
We assist American victims of terrorism in vindicating their rights under the law, and seek to hold terrorists and sponsors of terrorism accountable for their actions.
We fight anti-Semitism and anti-Israel bias in the media and on college campuses.
We strive to enforce existing law and also to create new law in order to safeguard the rights of the Jewish people in the United States and Israel.
Our Mission
ZOA STATEMENT
The ZOA speaks out for Israel – in reports, newsletters, and other publications. In speeches in synagogues, churches, and community events, in high schools and colleges from coast to coast. In e-mail action alerts. In op-eds and letters to the editor. In radio and television appearances by ZOA leaders. Always on the front lines of pro-Israel activism, ZOA has made its mark.
Connect with us
Sign up for our Newsletter