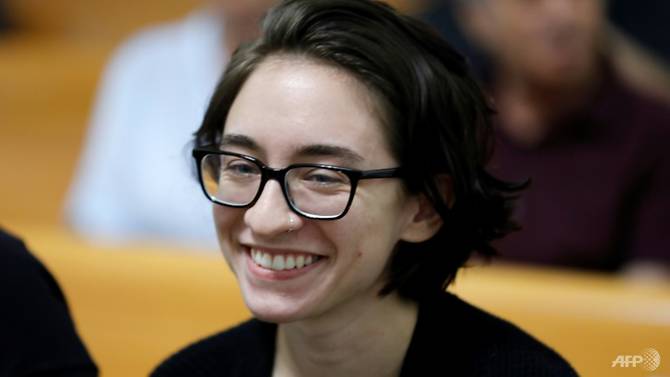 The United States would never knowingly permit the entry into the U.S. of someone whose record was comparable to Alqasem’s heinous record of leading actions to support Jew-killing terrorists and anti-Israel boycotts, divestment and sanctions (BDS).  Neither would any other self-respecting country or court.  Alqasem and her SJP chapter held a “national day of action” supporting Rasmea Odeh – the convicted terrorist who masterminded the murder of two American Jewish college students at Hebrew University in Israel, and a key military operative of designated foreign terrorist group the Popular Front for the Liberation of Palestine (PFLP).

Alqasem and her SJP chapter held a “national day of action” supporting Rasmea Odeh – the convicted terrorist who masterminded the murder of two American Jewish college students at Hebrew University in Israel, and a key military operative of designated foreign terrorist group the Popular Front for the Liberation of Palestine (PFLP).

Under Alqasem’s leadership, UF SJP also engaged in boycott actions against a leftist gay Israeli speaker (simply because he was Israeli) and Sabra hummus; viciously falsely demonized Israel as a “colonialist” and as engaged in “ethnic cleansing”; falsely portrayed Palestinian-Arabs in the midst of attacking innocent Israelis as executed “in cold blood.”; refused to “normalize” with Jewish groups; brought in virulent anti-Israel speakers; and staged disruptive protests at pro-Israel events. All this is well documented, including with screenshots.

The Israeli Supreme Court’s Alqasem decision also violates the court’s own precedents.  The Israeli Supreme Court’s unanimous (9-0) decision entitled HCJ 2072/12, The Coalition of Women for Peace, et al v. The Minister of Finance, et al. (15 April 2015) properly upheld Israel’s anti-BDS law, and correctly held that it is appropriate to deny benefits to and penalize those seeking to undermine the State of Israel using boycotts, divestment and/or sanctions against all or part of Israel.  In that case, Israeli Supreme Court Justice Hanan Melzer, one of Israel’s highest legal authorities, accurately described BDS as “political terrorism.”

The Israeli Supreme Court’s decision also ignores SJP’s terrorist connections.  Congressional testimony by a former U.S Treasury official documented the financial ties between Hamas and SJP’s sponsors and funders: Officials of American “charities” that were implicated in funneling money to terrorist group Hamas (in the Holy Land Foundation cases) now lead and support American Muslims for Palestine (AMP); AMP is “a leading driver of the BDS campaign” and is SJP’s major sponsor and organizer.

The detailed Jerusalem Center for Public Affairs study, “Students for Justice in Palestine Unmasked,” also documented that SJP is “affiliate[ed] with Arab and Islamic terror groups, is overtly anti-Semitic, incites hatred and violence against Jewish students, and rejects the existence of the state of Israel in any borders.”

It is a mistake for  the Israeli Supreme Court to permit an SJP leader to enter Israel, to undermine the country from within.  It is also ironic that Alqasem is intending to study human rights law at Hebrew University enabling her to become more effective in fighting against Israel and promoting her ugly and malicious and despicable anti-Israel pro-terrorist agenda.

ZOA sincerely hopes that the Israeli Supreme Court will convene a full panel to reverse this dangerous decision.

We would love to hear from you! Please fill out this form and we will get in touch with you shortly.
Trending Z
News October 19, 2018
ZOA Deplores that Pres. Trump Dined with Jew-Haters Kanye West & Nick Fuentes, and Demands he Condemn Them
News October 19, 2018
Newsweek Op-Ed by ZOA’s Mort Klein: ZOA Honoring Trump as the Greatest President Ever for Israel and American Jews
Uncategorized October 19, 2018
ZOA Honors Trump With Rarely Given Herzl Award for His Great Pro-Israel Work – Joins Ranks of Balfour, Truman, Begin, Meir, Ben-Gurion
News October 19, 2018
ZOA Responds to Questions About Pres. Trump, Kanye West, Fuentes, etc. Issue
Center for Law & Justice
We work to educate the American public and Congress about legal issues in order to advance the interests of Israel and the Jewish people.
We assist American victims of terrorism in vindicating their rights under the law, and seek to hold terrorists and sponsors of terrorism accountable for their actions.
We fight anti-Semitism and anti-Israel bias in the media and on college campuses.
We strive to enforce existing law and also to create new law in order to safeguard the rights of the Jewish people in the United States and Israel.
Our Mission
ZOA STATEMENT
The ZOA speaks out for Israel – in reports, newsletters, and other publications. In speeches in synagogues, churches, and community events, in high schools and colleges from coast to coast. In e-mail action alerts. In op-eds and letters to the editor. In radio and television appearances by ZOA leaders. Always on the front lines of pro-Israel activism, ZOA has made its mark.
Related Articles
OP-ED ZOA: NSC’s McMaster – Reassign Him to Area Not Dealing with Israel or Iran