Bolton at ZOA Dinner: US Will Put Maximum Pressure on Iran
ZOA in the news

The Trump administration is beginning to exert “maximum pressure” on the Tehran regime, US National Security Advisor John Bolton told Arutz Sheva Sunday evening, in an effort to force the rogue regime to curb its nuclear weapons program and support for terrorism across the Middle East. 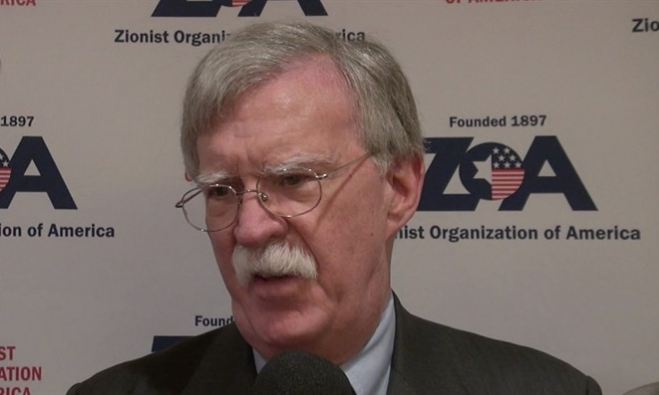 “The president is determined to exert maximum pressure on Iran, not just because of their nuclear weapons program, but because of their continuing support for terrorism, their ballistic missile program, their malign activities across the Middle East,” Said Bolton.

Bolton spoke just days after the Trump administration announced it was reimposing sanctions on Iran which had been lifted under the terms of the 2015 Joint Comprehensive Plan of Action, better known as the Iran nuclear deal.

“We’re going to put all the pressure on them we can to get them to change their behavior. This is not going to be like the Obama administration. This is going to be really rigorous.”

We would love to hear from you! Please fill out this form and we will get in touch with you shortly.
Trending Z
News November 6, 2018
ZOA Deplores that Pres. Trump Dined with Jew-Haters Kanye West & Nick Fuentes, and Demands he Condemn Them
Uncategorized November 6, 2018
ZOA Honors Trump With Rarely Given Herzl Award for His Great Pro-Israel Work – Joins Ranks of Balfour, Truman, Begin, Meir, Ben-Gurion
News November 6, 2018
ZOA Responds to Questions About Pres. Trump, Kanye West, Fuentes, etc. Issue
Uncategorized November 6, 2018
Zionist Organization of America Honors Donald Trump for Support for Israel, Jewish Community
Center for Law & Justice
We work to educate the American public and Congress about legal issues in order to advance the interests of Israel and the Jewish people.
We assist American victims of terrorism in vindicating their rights under the law, and seek to hold terrorists and sponsors of terrorism accountable for their actions.
We fight anti-Semitism and anti-Israel bias in the media and on college campuses.
We strive to enforce existing law and also to create new law in order to safeguard the rights of the Jewish people in the United States and Israel.
Our Mission
ZOA STATEMENT
The ZOA speaks out for Israel – in reports, newsletters, and other publications. In speeches in synagogues, churches, and community events, in high schools and colleges from coast to coast. In e-mail action alerts. In op-eds and letters to the editor. In radio and television appearances by ZOA leaders. Always on the front lines of pro-Israel activism, ZOA has made its mark.
Connect with us
Sign up for our Newsletter