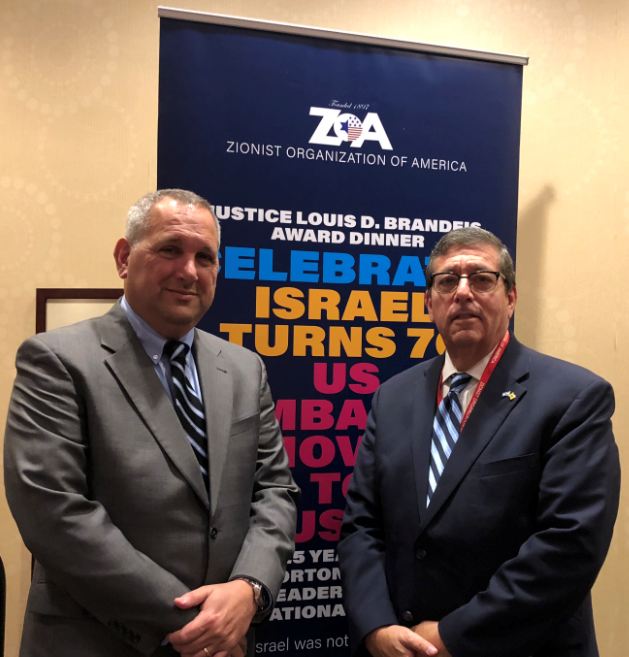 ZOA NY Metro hosted its inaugural Pre-Gala program for ZOA’s elite, society-level donors.  The program, Israel in an Evolving Middle East: An Assessment of the Strategic Complex in the Region, was presented on Saturday evening, November 3rd at the Marriott Marquis, Times Square, by Benjamin Krasna, Deputy Head of Mission, the number 2 Post at The Embassy of Israel to the United States.

Mr. Krasna provided an overview of the major players in the Middle East and shared the history and evolution of Israel’s relationships, alliances and challenges in the area.  Mr. Krasna referred to the dynamic nature of the Middle East, referring to both long established relationships and newly developing alliances between Israel, her neighbors and the world community.  Mr. Krasna is confident in Israel’s ability to defend herself.  When asked what we should be doing here in the United States, Mr. Krasna offered two critical suggestions: emphasize Jewish continuity and Jewish education.  Don’t let your children take Israel for granted, promote to them a strong connection to Israel. And he firmly suggested making sure all Americans understand why Israel is a valued strategic ally of the United States.

The ZOA Pre-Gala program was well attended by select ZOA Donor Society members from across the country.  Mr. Krasna was introduced by Mark Levenson, Chairman of the ZOA’s National Board of Directors who spoke of the important work the ZOA is doing and of the special relationship the ZOA has with the current administrations of both Israel and the United States.

ZOA is working on a schedule of 2019 Donor Society Events for Herzl, Menachem Begin, Brandeis, Jabotinsky & the National Leadership Societies.

To join ZOA and to begin to share the benefits of ZOA Society membership, click here, call the office at 212-481-1500, or email us at info@zoa.org

We would love to hear from you! Please fill out this form and we will get in touch with you shortly.
Trending Z
News November 13, 2018
New Biden Nominees Opposed Abraham Accords & Involved in Israeli Election Interference
Uncategorized November 13, 2018
ZOA Letter to DOJ & FBI on New “Mapping Project” Antisemitic Threat by ZOA Pres. Morton Klein, Dir. of Research/Special Projects Liz Berney, Esq., Dir. Center for Law & Justice Susan Tuchman, Esq.
Op-Ed November 13, 2018
ZOA’s Mort Klein JPost Op-Ed: BDS Mapping Project Targets Every Jew, Including Left Wing, Israelophobic Jews
News November 13, 2018
U.S. Senators Criticize Tamara Wittes, Biden Nominee’s Anti-Israel Bias ― Jewish Groups are Deafeningly Silent
Center for Law & Justice
We work to educate the American public and Congress about legal issues in order to advance the interests of Israel and the Jewish people.
We assist American victims of terrorism in vindicating their rights under the law, and seek to hold terrorists and sponsors of terrorism accountable for their actions.
We fight anti-Semitism and anti-Israel bias in the media and on college campuses.
We strive to enforce existing law and also to create new law in order to safeguard the rights of the Jewish people in the United States and Israel.
Our Mission
ZOA STATEMENT
The ZOA speaks out for Israel – in reports, newsletters, and other publications. In speeches in synagogues, churches, and community events, in high schools and colleges from coast to coast. In e-mail action alerts. In op-eds and letters to the editor. In radio and television appearances by ZOA leaders. Always on the front lines of pro-Israel activism, ZOA has made its mark.
Related Articles
OP-ED BY: ZOA Staff ZOA: Israel Must Discipline Israeli Arab MKs Who Support & Encourage Physically Attacking Jews