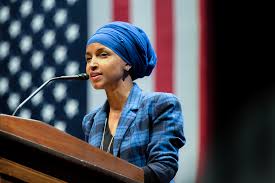 The Zionist Organization of America (ZOA) has condemned the anti-Israel record of newly elected Member of Congress, Ihlan Omar, and is seeking to alert the public to her record of hostile, anti-Israel extremism. Omar, a Muslim refugee from Somalia, was elected in the 2018 midterm elections to replace Rep. Keith Ellison (D–MN) in the state’s 5th Congressional District, a solidly Democratic seat. The ZOA has also called upon the Democratic Party and the media to criticize her anti-Israel extremism, something which reportage on her campaign and victory has totally ignored.

Omar ran for Congress on a platform of Medicare for all and abolishing Immigration and Customs Enforcement (ICE). Now that she been elected, Omar has now confirmed to the website Muslim Girl that she also supports the Boycott, Divestment and Sanctions (BDS) movement which, as openly admitted by its originators, seeks to delegitimize, economically harm and ultimately eliminate the Jewish state of Israel by criminalizing business relations with Israeli Jews. Her campaign told the website that, “Ilhan believes in and supports the BDS movement, and has fought to make sure people’s right to support it isn’t criminalized. She does however, have reservations on the effectiveness of the movement in accomplishing a lasting solution.”

Following her being elected, Omar told Muslim Girl magazine that she “believes in and supports the BDS movement,” adding that she has fought to ensure others are also able to openly support the movement. Omar is first Member of Congress to openly support BDS.

Omar has clearly performed a bait-and-switch, since, when asked in August during a primary debate at a synagogue to specify “exactly where you stand” on BDS, Omar said that BDS was “not helpful in getting that two-state solution” without, however, telling anyone that she nonetheless supports BDS.

Omar has clearly performed a bait-and-switch, since, when asked in August during a primary debate at a synagogue to specify “exactly where you stand” on BDS, Omar said that BDS was “not helpful in getting that two-state solution” without, however, telling anyone that she nonetheless supports BDS.

Omar was elected to replace Rep. Keith Ellison (D–MN) in the state’s 5th Congressional District. Ellison was the first Muslim elected to Congress.

Her campaign spoke with Muslim Girl in a feature published on Sunday. PJ Media’s David Steinberg has identified 105 news stories written in the immediate aftermath of Omar’s victory, not a single one of which one mentioned her extreme statements crediting Israel with apartheid and hypnotizing the world while concealing its “evil doings.” Nor did anyone call upon the Democratic Party to distance itself from this rhetoric.

ZOA National President Morton A. Klein said, “Ihlan Omar is not only the first Member of Congress to support BDS, but she appears to have deliberately misled Jewish constituents on her position regarding BDS prior to the election. This is simply scandalous.

“Omar’s reservations regarding the effectiveness of BDS does not help her anti-Israel bonafides. Consider: all she is really saying is that she doubts how useful BDS might prove to be in demonizing, ostracizing and harming Israel. this implies that, if BDS were highly effective at these things, she would support it even more wholeheartedly.

“Rep. Omar’s record is deeply worrying. Why would she have been in a minority of merely two opposing a bill denying life insurance payments to terrorists, like the state law that was actually passed in Minnesota with an overwhelming bipartisan majority?

“As for her unscrupulous defaming of Israel as an ‘apartheid state,’ David Harsayni, a senior editor at the Federalist, has rightly observed that for Omar ‘to accuse the only democratic state in the Middle East, which grants more liberal rights to its Muslim citizens than any Arab nation, of being an “apartheid regime” is, on an intellectual level, grossly disingenuous or incredibly ignorant.’

“It is deeply worrying and symptomatic of the present day that Rep. Omar’s extreme hostility to Israel and vicious statement about Israeli evil were are ignored wall-to-wall in media reportage. It is as if her hatred of Israel is simply so unimportant that it does not bear mentioning. Why did no journalist reporter hostility? Isn’t this an aspect of her record and views the public are entitle to know? And why did no-one in the Democratic Party take a stand and criticize her? Where were the pro-Israel Democratic legislators?

“Rep. Omar’s emergence is a warning to the Democratic Party that radicals who oppose the party’s traditional support for Israel and the US/Israel relationship are making inroads.”

We would love to hear from you! Please fill out this form and we will get in touch with you shortly.
Trending Z
News November 15, 2018
ZOA Deplores that Pres. Trump Dined with Jew-Haters Kanye West & Nick Fuentes, and Demands he Condemn Them
Uncategorized November 15, 2018
ZOA Honors Trump With Rarely Given Herzl Award for His Great Pro-Israel Work – Joins Ranks of Balfour, Truman, Begin, Meir, Ben-Gurion
News November 15, 2018
ZOA Responds to Questions About Pres. Trump, Kanye West, Fuentes, etc. Issue
Uncategorized November 15, 2018
Zionist Organization of America Honors Donald Trump for Support for Israel, Jewish Community
Center for Law & Justice
We work to educate the American public and Congress about legal issues in order to advance the interests of Israel and the Jewish people.
We assist American victims of terrorism in vindicating their rights under the law, and seek to hold terrorists and sponsors of terrorism accountable for their actions.
We fight anti-Semitism and anti-Israel bias in the media and on college campuses.
We strive to enforce existing law and also to create new law in order to safeguard the rights of the Jewish people in the United States and Israel.
Our Mission
ZOA STATEMENT
The ZOA speaks out for Israel – in reports, newsletters, and other publications. In speeches in synagogues, churches, and community events, in high schools and colleges from coast to coast. In e-mail action alerts. In op-eds and letters to the editor. In radio and television appearances by ZOA leaders. Always on the front lines of pro-Israel activism, ZOA has made its mark.
Related Articles
OP-ED BY: ZOA Staff ZOA: Israel Must Discipline Israeli Arab MKs Who Support & Encourage Physically Attacking Jews