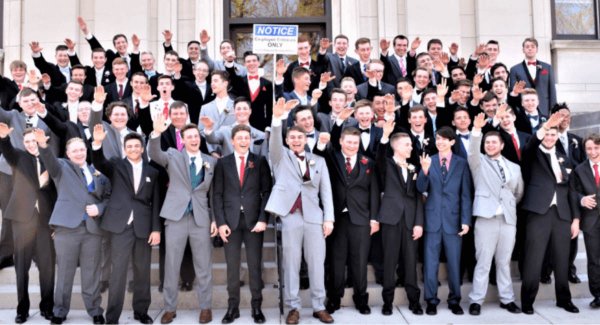 The ZOA sent a letter yesterday to Dr. Lori Mueller, Superintendent of Wisconsin’s Baraboo School District, and the members of the Board of Education, after a photograph was revealed, showing more than 50 male high school students making the Nazi salute before last spring’s junior prom. The photographer – who also posted the photo on his website – was a parent of one of the students in the photo as well as a retired teacher. Parents and community members were reportedly present when the photo was taken.

The ZOA reminded school officials of their obligation under Title VI of the Civil Rights to provide a learning environment free from anti-Semitic harassment and discrimination. The ZOA recommended eight steps for school officials to take, which include disciplining the wrongdoers; educating students, teachers and community members about anti-Semitism and the Holocaust; and reaffirming the district’s policy against anti-Semitism and other forms of dissemination and publicizing the means by which students, parents and district employees may report these problems.

You can read the ZOA letter here.

We would love to hear from you! Please fill out this form and we will get in touch with you shortly.
Trending Z
News November 15, 2018
ZOA Deplores that Pres. Trump Dined with Jew-Haters Kanye West & Nick Fuentes, and Demands he Condemn Them
Uncategorized November 15, 2018
ZOA Honors Trump With Rarely Given Herzl Award for His Great Pro-Israel Work – Joins Ranks of Balfour, Truman, Begin, Meir, Ben-Gurion
News November 15, 2018
ZOA Responds to Questions About Pres. Trump, Kanye West, Fuentes, etc. Issue
Uncategorized November 15, 2018
Zionist Organization of America Honors Donald Trump for Support for Israel, Jewish Community
Center for Law & Justice
We work to educate the American public and Congress about legal issues in order to advance the interests of Israel and the Jewish people.
We assist American victims of terrorism in vindicating their rights under the law, and seek to hold terrorists and sponsors of terrorism accountable for their actions.
We fight anti-Semitism and anti-Israel bias in the media and on college campuses.
We strive to enforce existing law and also to create new law in order to safeguard the rights of the Jewish people in the United States and Israel.
Our Mission
ZOA STATEMENT
The ZOA speaks out for Israel – in reports, newsletters, and other publications. In speeches in synagogues, churches, and community events, in high schools and colleges from coast to coast. In e-mail action alerts. In op-eds and letters to the editor. In radio and television appearances by ZOA leaders. Always on the front lines of pro-Israel activism, ZOA has made its mark.
Related Articles
OP-ED ZOA: Correcting the Record About Abe Foxman’s False Statement About ZOA Gala Dinner

My friend David Friedman has the potential to be the greatest US Ambassador to Israel ever. He thoroughly understands the detailed tragic reality of the Arab/Islamic war against Israel. He has a powerful grasp of Israel’s defense needs, the dangers they face, and the danger now of a Hamas/PA State. No previous ambassador appreciates the […]