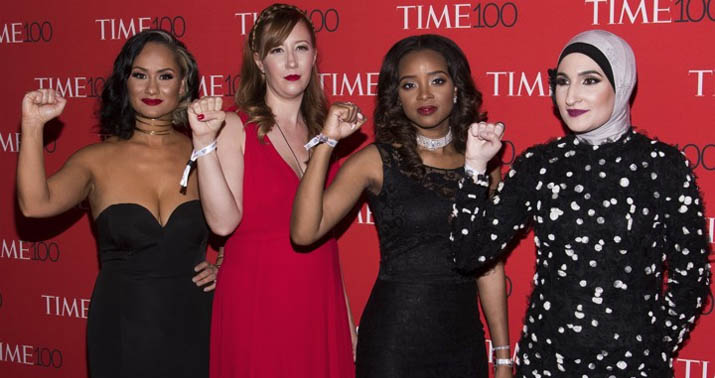 The Zionist Organization of America (ZOA) has pointed to recent reports detailing the turmoil within the so-called Women’s March movement (in reality, a grouping that only extends to left-wing women, not all women of differing political points of view and which has until now excluded liberals and feminists who support Israel) over its toleration of anti-Semitism within its ranks from its leadership down.

In addition to openly associating with grotesque anti-Semites like Louis Farrakhan, Women’s March leaders like Linda Sarsour have also defamed Zionism, Sarsour tweeting her support for the intifada – the term for the Palestinian Arab terror war against Jews in Israel – describing it as “invaluable on many fronts.”

“The Women’s March is in disarray, with leaders facing allegations of mismanagement and local chapters seeking to go their own way out of either political or logistical self-interest. And for Jewish women there is an added layer of anguish: Top leaders of the main organization have been accused of engaging in or condoning antisemitism, and failing to heed the concerns of its thousands of Jewish backers. ‘It’s bad for the movement,’ Emiliana Guereca, the executive director of Women’s March Los Angeles, told JTA …. Donors have also dropped out and celebrities turned down offers to speak at its 2019 rally, citing concerns about antisemitism …. Last week, the Women’s March in Washington State cited antisemitism in its decision to sever its affiliation with the national Women’s March organization. ‘Continuing to be a part of the Women’s March with the blatant bigotry they display would be breaking a promise. We can’t betray our Jewish community by remaining a part of this organization,’ board director Angie Beem wrote in a Facebook post announcing the decision. In November, Women’s March co-founder Teresa Shook called on the national co-chairs to resign, saying they ‘allowed antisemitism’ and other hateful rhetoric. Actress and activist Alyssa Milano also said that she would not speak at the march if asked. The controversy surrounding the march arose from organizer Tamika Mallory’s ties to antisemitic Nation of Islam leader Louis Farrakhan. Earlier this year, Mallory was criticized for not speaking out after she attended an event during which Farrakhan said ‘the powerful Jews are my enemy’ and accused ‘Satanic Jews’ of having a ‘grip on the media.’ Farrakhan has a long history of making antisemitic and homophobic statements. The organizers of the march later said the Nation of Islam leader’s statements ‘are not aligned with the Women’s March Unity Principles,’ but also defended Mallory against criticism. Mallory has defended her and her family’s association with Farrakhan …. The fire was further stoked by a report published earlier this month in Tablet that Mallory and fellow organizer Carmen Perez had made antisemitic statements at two Women’s March planning meetings. Tablet has an on-the-record account by a Jewish participant for each of the two meetings (Josephin Dolsten, ‘Women’s March Facing Unknown Challenges with Antisemitism Allegations,’ Jerusalem Post, December 24, 2018).

The Tablet investigative piece by Leah Sweeney and Jacob Siegel details the following remarks made by Malory and Perez at the planning meetings:

“Perez and Mallory allegedly first asserted that Jewish people bore a special collective responsibility as exploiters of black and brown people—and even, according to a close secondhand source, claimed that Jews were proven to have been leaders of the American slave trade. These are canards popularized by The Secret Relationship Between Blacks and Jews, a book published by Louis Farrakhan’s Nation of Islam—“the bible of the new anti-Semitism,” according to Henry Louis Gates Jr., who noted in 1992: ‘Among significant sectors of the black community, this brief has become a credo of a new philosophy of black self-affirmation.’ .… Six of the seven women in attendance would not speak openly to Tablet about the meeting, but multiple sources with knowledge of what happened confirmed the story.… At the end of January, according to multiple sources, there was an official debriefing at Mallory’s apartment. In attendance were Mallory, Evvie Harmon, Breanne Butler, Vanessa Wruble, Cassady Fendlay, Carmen Perez and Linda Sarsour. They should have been basking in the afterglow of their massive success, but—according to Harmon—the air was thick with conflict. ‘We sat in that room for hours,’ Harmon told Tablet recently. ‘Tamika told us that the problem was that there were five white women in the room and only three women of color, and that she didn’t trust white women. Especially white women from the South. At that point, I kind of tuned out because I was so used to hearing this type of talk from Tamika. But then I noticed the energy in the room changed. I suddenly realized that Tamika and Carmen were facing Vanessa, who was sitting on a couch, and berating her—but it wasn’t about her being white. It was about her being Jewish. “Your people this, your people that.” I was raised in the South and the language that was used is language that I’m very used to hearing in rural South Carolina. Just instead of against black people, against Jewish people. They even said to her ‘your people hold all the wealth.’ You could hear a pin drop. It was awful.’” (Leah Sweeney and Jacob Siegel, ‘Is the Women’s March Melting Down?’ Tablet, December 10, 2018).

In addition to openly associating with grotesque anti-Semites like Louis Farrakhan, Women’s March leaders like Linda Sarsour (who has said of Farrakhan that “The brother does not age. God bless him.”) have also defamed Zionism, Sarsour claiming on Twitter that “nothing is creepier than Zionism”; asserting in Stalinist fashion that a Zionist cannot be a feminist; posting a photo of a young Arab child walking toward Israeli soldiers, holding rocks in both hands, and praising it as “the definition of courage”; and tweeting her support for the intifada – the term for the Palestinian Arab terror war against Jews in Israel – describing it as “invaluable on many fronts.” (Sarsour has also viciously attacked genuine feminists and human rights activists fighting for women’s rights in Muslim societies Ayaan Hirsi Ali and Brigitte Gabriel, saying in a since-deleted tweet that “I wish I could take away their vaginas.” She has also revealingly confessed at the time of mass-murderer Saddam Hussein’s apprehension in 2003 that “my Arab pride was hurt”).

ZOA National President Morton A. Klein said, “The evidence is mounting, and clear –– from the beginning, the so-called Women’s March has been infested from the top with extremist, hate figures who adopt anti-Semitic positions and who have also sought to drive out feminists and liberal who support Israel.

“The Women’s March was always running the risk of tolerating anti-Semitism. This was implicit from its insistence from the start on excluding liberal and feminist supporters of Israel, indicating that the movement was seeking to defame Israel as an illiberal, condemnable cause.

“Those that seek to defame the nation state of the Jewish people are not indulging in mere policy criticism of Israel, but seek to harm the Jewish people, the Jewish collective embodied in the state of Israel, and to encourage the most hateful emotions and activism against Israel, leading to the sort of anti-Jewish violence and confrontations we have been witnessing, for example, on American college campuses in recent years.

“It is clear that the only way the Women’s Movement can rehabilitate itself is to reject its anti-Semitic leaders, to unambiguously dissociate itself from anti-Semitic figures and organizations like Louis Farrakhan and his black supremacist Nation of Islam, and to genuinely welcome liberals and feminists who support Zionism and Israel. Anything less would inevitably invite the inference that the movement is, at best, ambivalent on the subject and not really free of the racism that it claims to oppose.”

We would love to hear from you! Please fill out this form and we will get in touch with you shortly.
Trending Z
News December 24, 2018
ZOA Condemns U.S. State Dept. & U.S. Amb. Nides For Siding with Antisemitic, Discriminatory Palestinian & Hamas Terrorists re: the Temple Mount, Violating Jews’ Religious Freedom
News December 24, 2018
ZOA’s Klein JPost Op-Ed: There is Nothing Extreme About Israel’s New Government
Uncategorized December 24, 2018
FLASH: ISRAEL-JORDAN PEACE TREATY (1994) GUARANTEES JEWS ACCESS TO THE TEMPLE MOUNT – LET MY PEOPLE PRAY
Uncategorized December 24, 2018
ZOA Analysis: Most American Rabbis Who Are Boycotting Some Israeli Ministers Are From Extremist Left Wing Groups (J Street; T’ruah; JVP)
Center for Law & Justice
We work to educate the American public and Congress about legal issues in order to advance the interests of Israel and the Jewish people.
We assist American victims of terrorism in vindicating their rights under the law, and seek to hold terrorists and sponsors of terrorism accountable for their actions.
We fight anti-Semitism and anti-Israel bias in the media and on college campuses.
We strive to enforce existing law and also to create new law in order to safeguard the rights of the Jewish people in the United States and Israel.
Our Mission
ZOA STATEMENT
The ZOA speaks out for Israel – in reports, newsletters, and other publications. In speeches in synagogues, churches, and community events, in high schools and colleges from coast to coast. In e-mail action alerts. In op-eds and letters to the editor. In radio and television appearances by ZOA leaders. Always on the front lines of pro-Israel activism, ZOA has made its mark.
Related Articles
OP-ED BY: ZOA Staff ZOA Condemns Kerry For Supporting Iran’s Outrageous Demands Despite Violations