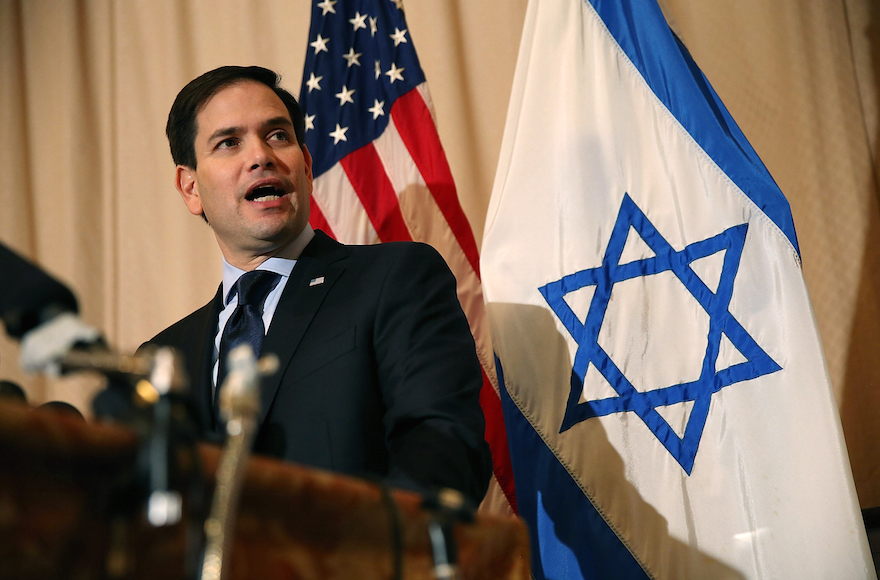 The Zionist Organization of America (ZOA) strongly applauds the passage in the US Senate of the “Strengthening America’s Security in the Middle East Act of 2019” supporting Israel and US-Israel relations. The bill passed by an overwhelming majority of 77-23, and included language to fight BDS at the State and local levels. The bill was originally introduced by Senators Marco Rubio (R-FL), James Risch (R-ID), Cory Gardner (R-CO), and Mitch McConnell (R-KY).

The passage of this bill in the Senate is a strong and welcome reminder of the bipartisan support for Israel and against BDS in Congress. ZOA thanks Sen. Rubio and the other sponsors of this bill.

“The passage of this bill in the Senate is a strong and welcome reminder of the bipartisan support for Israel and against BDS in Congress. ZOA thanks Sen. Rubio and the other sponsors of this bill. The Senators who opposed this bill, wrongly citing ‘Freedom of Speech’ grounds, have some explaining to do to their constituents. The idea that this law violates the First Amendment is nonsense. Every critic of Israel is free to oppose and criticize Israel under this law and nothing in the law changes that. This law administratively paves the way for state and local governments to refuse to do business with companies that are actively participating in the BDS movement. States have this right as sovereign entities under our Constitution. Critics of the law, including the ACLU, ignore the fact that states are empowered by the Constitution to include in contracts with the state government restrictions on the conduct of the company. It is legal for a state to require that a company not discriminate against Gay or African Americans or else suffer the consequences of the State not doing business with that company. This is often done.  It is odd that the ACLU is silent in those cases and does not seem to register that their opposition to the inclusion of BDS activity by a contractor is no different. BDS is hateful and radical conduct that seeks to wound the world’s only Jewish nation, and it is illegitimate.

“People who oppose Israeli government policy have every right under this law to express themselves fully in criticizing Israel’s leaders and Israel itself. What they may not do is participate in an economic boycott against Israel, and expect to do business with one of the states having a law against BDS. This point was made in the Arkansas case only last month, and a judge found in favor of a state law that requires contractors to not participate in BDS. The federal law explicitly states that it is not in any way in conflict with the First Amendment, and the judge in Arkansas found no violation of the First Amendment in the state law. For the 22 Democratic Senators and one Republican Senator who voted against the BDS provision, the question is why have they never found the many state contracting provisions restricting hiring on the basis of sex, or sexual preference, or minority status objectionable? For the record, more Democrats voted in favor of the bill than opposed it, making it a truly bi-partisan outcome.

“We strongly thank and praise Senators Rubio, Risch, Gardner and McConnell for moving so quickly to address this important unfinished business from the previous Congress. We hope that the bill will be quickly passed by the House of Representatives in the same form. There is a movement to separate out the BDS law in the House because it is ‘controversial.’ ZOA strongly encourages pro-Israel members of the House to maintain the momentum on the BDS provision. Other pieces of the “Strengthening America’s Security in the Middle East Act of 2019” would codify the 10-year Memorandum of Understanding on US military assistance to Israel, extend war reserve stockpile authority and authorize the transfer of defense articles to Israel in time of need; reauthorize US defense cooperation with Jordan; and impose new sanctions on entities providing financing to the Syrian government while protecting humanitarian efforts to help Syrian civilians.”

We would love to hear from you! Please fill out this form and we will get in touch with you shortly.
Trending Z
News February 7, 2019
ZOA Condemns U.S. State Dept. & U.S. Amb. Nides For Siding with Antisemitic, Discriminatory Palestinian & Hamas Terrorists re: the Temple Mount, Violating Jews’ Religious Freedom
Uncategorized February 7, 2019
FLASH: ISRAEL-JORDAN PEACE TREATY (1994) GUARANTEES JEWS ACCESS TO THE TEMPLE MOUNT – LET MY PEOPLE PRAY
Uncategorized February 7, 2019
ZOA Analysis: Most American Rabbis Who Are Boycotting Some Israeli Ministers Are From Extremist Left Wing Groups (J Street; T’ruah; JVP)
Uncategorized February 7, 2019
Israel’s “Right of Return” Grandparent Clause is De-Judaizing the Jewish State – Eliminate It
Center for Law & Justice
We work to educate the American public and Congress about legal issues in order to advance the interests of Israel and the Jewish people.
We assist American victims of terrorism in vindicating their rights under the law, and seek to hold terrorists and sponsors of terrorism accountable for their actions.
We fight anti-Semitism and anti-Israel bias in the media and on college campuses.
We strive to enforce existing law and also to create new law in order to safeguard the rights of the Jewish people in the United States and Israel.
Our Mission
ZOA STATEMENT
The ZOA speaks out for Israel – in reports, newsletters, and other publications. In speeches in synagogues, churches, and community events, in high schools and colleges from coast to coast. In e-mail action alerts. In op-eds and letters to the editor. In radio and television appearances by ZOA leaders. Always on the front lines of pro-Israel activism, ZOA has made its mark.
Related Articles
OP-ED ZOA to CNN: Apologize to Donald Trump, Jr. and ZOA for Their False Claims

Earlier last week CNN reporter Jason Carroll ran a story on the network falsely insinuating that Donald Trump Jr. was trafficking in anti-Semitism by Trump Jr. retweeting factual statements about George Soros. As a child of Holocaust survivors and someone who has worked closely with Don in the past to fight anti-Semitism, let me be […]

ZOA President Morton A. Klein and Director of the ZOA Center for Law and Justice Susan Tuchman, Esq. released the following statement: In a long-awaited decision, the U.S. Department of Education’s Office for Civil Rights (OCR) is re-opening the ZOA’s 2011 case against New Jersey’s Rutgers University, which alleged that Jewish students were subjected to […]