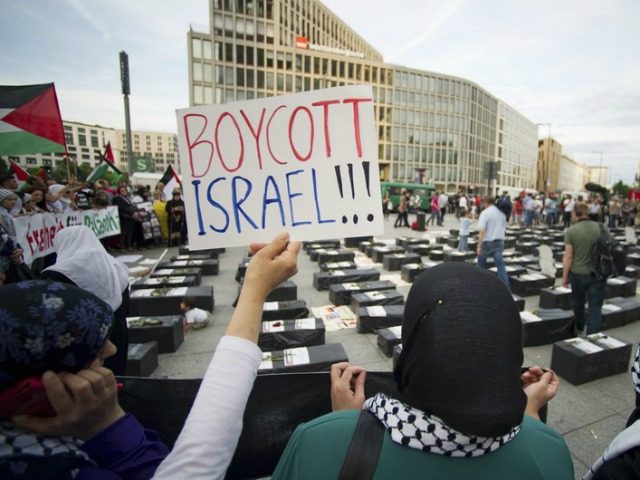 The SPC is listed as one of 14 “internship sites” available to students majoring in Writing Studies, Rhetoric, and Composition, each of which offers three credits and a letter grade. The University says that the SPC “educates, agitates and organizes for a world where war, violence, and exploitation in any form will no longer exist.”

The SPC has been condemned by Sarah Levin, executive director of Jews Indigenous to the Middle East and North Africa (JIMENA), which works to raise awareness of the antisemitic violence and persecution sustained by Jewish communities in the region both before and following Israel’s establishment. Ms. Levin says that, “When groups like the Syracuse Peace Council who purport to be champions of human rights not only dismiss, but mock the very real ethnic cleansing and dispossession of close to one million indigenous Jews from the Middle East and North Africa they prove themselves to be not only anti-Zionist, but extremely ignorant and biased against Jews … Rather than promoting equitable solutions and relationship building efforts between Jews and Arabs in the Middle East, these groups care only about vilifying Israel and its supporters; thus exposing themselves as misguided at best and antisemitic at worst” (‘Syracuse University Called to Stop Offering Credits for Internships With BDS Group,’ Algemeiner, February 15, 2019).

Several speakers at recent SPC events have said, including at an off-campus forum titled, ‘Palestine Behind the Wall,’ at which one speaker expressed support for Hamas, the US- and EU-designated terrorist organization that calls in its Covenant for the destruction of Israel and the global murder of Jews. Also a former Syracuse University faculty member, Julia Ganson, said at the same SPC event that “[Hamas has] done a lot of good for Palestinians.” When asked whether she would be in favor of “teaching our young kids about Hamas and the good work they do,” Ganson favored the idea. According to Ganson, “being Palestinian means resisting.” Various speakers have printed or condoned the use of terrorist violence against Israel and expressed support for Hamas.

One SPC speaker, Ursula Rozum, said in an interview that Zionism is continuing a process of genocide against the Palestinian Arabs.Rozum led the Syracuse Peace Council in a planned disruption of a speech given at Syracuse University in April 2018 by the Israeli Consul-General in New York, Dani Dayan. Both Rozum and CODEPINK national leader Ariel Gold were escorted out of Dayan’s speech after shouting “Free Palestine, end the bloodshed in Gaza” and “Dani Dayan, you have blood on your hands” (Justin Brooke Murray, ‘Anti-Israel internship can get you credit at Syracuse,’ Campus Reform, February 14, 2019).

ZOA National President Morton A. Klein said, “It is beyond belief and horrifying that a university promotes the destruction of Israel, a fellow democracy and close ally of the US, by offering credits to students who intern with the BDS-promoting Syracuse Peace Council.”

ZOA National President Morton A. Klein said, “It is beyond belief and horrifying that a university promotes the destruction of Israel, a fellow democracy and close ally of the US, by offering credits to students who intern with the BDS-promoting Syracuse Peace Council.

“This is essentially aiding  students who believe and promote the BDS message of hatred an defamation of Israel with a view to promoting Israel’s eventual elimination –– the professed aim of  BDS founding members.

“Syracuse University is therefore not seeking to educate students about the Middle East. Rather, it has adopted with regard to the Arab war on Israel’s existence the side of terrorists and genocidally-inclined Jew-killers like Hamas.

“Students who wish to work in campaigns devoted to defaming and eliminating Israel find at Syracuse University that they can earn credits towards the completion of their courses by working for these infamous groups and campaigns dedicated to Israel’s destruction.

“We call on Syracuse University to immediately cease the practice of offering credits to SPC interns. To offer such credits is to ignore the designation of Hamas by the State Department as a terrorist organization, to ignore its calls for a genocide of the Jews and to promote the eventual elimination of Israel, and ignores the BDS goal of demonizing and destroying Israel.

We would love to hear from you! Please fill out this form and we will get in touch with you shortly.
Trending Z
News February 20, 2019
ZOA Condemns U.S. State Dept. & U.S. Amb. Nides For Siding with Antisemitic, Discriminatory Palestinian & Hamas Terrorists re: the Temple Mount, Violating Jews’ Religious Freedom
Uncategorized February 20, 2019
FLASH: ISRAEL-JORDAN PEACE TREATY (1994) GUARANTEES JEWS ACCESS TO THE TEMPLE MOUNT – LET MY PEOPLE PRAY
Uncategorized February 20, 2019
ZOA Analysis: Most American Rabbis Who Are Boycotting Some Israeli Ministers Are From Extremist Left Wing Groups (J Street; T’ruah; JVP)
Uncategorized February 20, 2019
Israel’s “Right of Return” Grandparent Clause is De-Judaizing the Jewish State – Eliminate It
Center for Law & Justice
We work to educate the American public and Congress about legal issues in order to advance the interests of Israel and the Jewish people.
We assist American victims of terrorism in vindicating their rights under the law, and seek to hold terrorists and sponsors of terrorism accountable for their actions.
We fight anti-Semitism and anti-Israel bias in the media and on college campuses.
We strive to enforce existing law and also to create new law in order to safeguard the rights of the Jewish people in the United States and Israel.
Our Mission
ZOA STATEMENT
The ZOA speaks out for Israel – in reports, newsletters, and other publications. In speeches in synagogues, churches, and community events, in high schools and colleges from coast to coast. In e-mail action alerts. In op-eds and letters to the editor. In radio and television appearances by ZOA leaders. Always on the front lines of pro-Israel activism, ZOA has made its mark.
Related Articles
OP-ED BY: ZOA Staff ZOA: Israel Must Discipline Israeli Arab MKs Who Support & Encourage Physically Attacking Jews