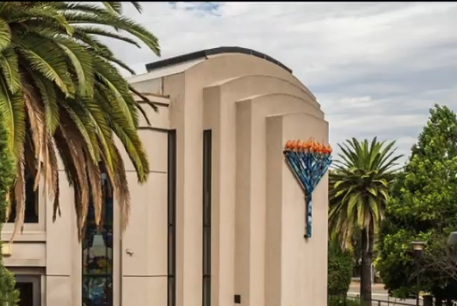 The ZOA is horrified that Jewish people in this country have endured yet another heinous, despicable antisemitic shooting/murder while praying in synagogue – the shooting yesterday morning at the Chabad Synagogue in Poway, California. Our hearts and prayers go out to all the innocent victims – a murdered 60-year-old woman and several injured innocents, including the Chabad Rabbi and a 1-year-old baby girl, and their families, and the entire Chabad and Poway communities.

ZOA condemns this horrendous hate crime. Such crimes once again demonstrate that antisemitism from all corners must be condemned and made totally unacceptable.

We thus once again urge Congress to set an example to the nation, by condemning the antisemitism repeatedly espoused by Congresswomen Rashida Tlaib and Ilhan Omar – and removing them from their powerful committee positions. We urge NYU to rescind its honor of the antisemitic hate group “Students for Justice in Palestine” and urge all college campuses to start taking the poisonous antisemitic hate on their campuses seriously. Our elected officials and academic leaders must act now to end the virulent Jew hatred that is endangering Jewish lives in this country.

We would love to hear from you! Please fill out this form and we will get in touch with you shortly.
Trending Z
Uncategorized April 28, 2019
FLASH: ISRAEL-JORDAN PEACE TREATY (1994) GUARANTEES JEWS ACCESS TO THE TEMPLE MOUNT – LET MY PEOPLE PRAY
Uncategorized April 28, 2019
ZOA Analysis: Most American Rabbis Who Are Boycotting Some Israeli Ministers Are From Extremist Left Wing Groups (J Street; T’ruah; JVP)
Uncategorized April 28, 2019
Israel’s “Right of Return” Grandparent Clause is De-Judaizing the Jewish State – Eliminate It
Uncategorized April 28, 2019
Exclusive: ZOA Accuses Ilhan Omar of Hating the U.S. ‘as Much as Israel,’ Lauds Kevin McCarthy for ‘Throwing Her Off the HFAC’
Center for Law & Justice
We work to educate the American public and Congress about legal issues in order to advance the interests of Israel and the Jewish people.
We assist American victims of terrorism in vindicating their rights under the law, and seek to hold terrorists and sponsors of terrorism accountable for their actions.
We fight anti-Semitism and anti-Israel bias in the media and on college campuses.
We strive to enforce existing law and also to create new law in order to safeguard the rights of the Jewish people in the United States and Israel.
Our Mission
ZOA STATEMENT
The ZOA speaks out for Israel – in reports, newsletters, and other publications. In speeches in synagogues, churches, and community events, in high schools and colleges from coast to coast. In e-mail action alerts. In op-eds and letters to the editor. In radio and television appearances by ZOA leaders. Always on the front lines of pro-Israel activism, ZOA has made its mark.
Related Articles
OP-ED BY: ZOA Staff ZOA Condemns Kerry For Supporting Iran’s Outrageous Demands Despite Violations