The Zionist Organization of America is calling on pro-Israel organizations and “decent Americans” to urge the removal of Rep. Rashida Tlaib (D-MI) from the Democratic party and Congressional committees.

“Someone who knowingly and enthusiastically consorts with the most virulent antisemites, blood-soaked terrorists and conspiracy theorists is clearly beyond the pale, or no one is beyond the pale,” wrote ZOA National President Morton A. Klein and Chairman Mark Levenson in a statement. 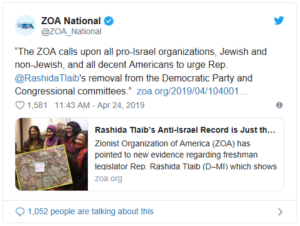 ZOA based its claims partially on a video published late last month by the Israel Advocacy Movement, which unpacked the individuals that Tlaib thanked for helping her to get into office. Among those individuals, the Israel Advocacy Movement claims, are close associates of Palestinians terrorists with Jewish blood on their hands. Further, several of these individuals have posed blatantly antisemitic material on their social networks.

The Israel Advocacy Movement describes its mission as working to “counter the increasing hostility Israel is suffering.” ZOA, founded in 1897, is the oldest pro-Israel organization in the United States.

“The ZOA calls upon all pro-Israel organizations, Jewish and non-Jewish, and all decent Americans to urge Rep. Tlaib’s removal from the Democratic Party and Congressional committees.”

For example, Tlaib is seen posing with Rasmea Odeh, a former member of the Popular Front for the Liberation of Palestine who was convicted by Israeli military courts for her role in the murder of two students, Leon Kanner and Eddie Joffe in the 1969 Jerusalem Supermarket bombing.

Tlaib has shared photos Mohammed Ali, a Palestinian terrorist who stabbed three Israeli soldiers in Jerusalem in an incident that was captured on video. And she has shared praise for Imad Mughniyeh, the Hezbollah terrorist responsible for the murder of 242 United States servicemen in a 1982 suicide bombing in Lebanon against US forces stationed there on an UN-sanctioned peace-keeping mission.

In total, Israel Advocacy Movement identified 18 individuals who she praised or who are associated with her that are rabid Israel haters and who the organization claims are supporters of terrorism.

The ZOA also noted how on Tlaib’s first day in office, she took a sticky note with the word “Palestine” on it and placed it with an arrow pointing at Israel, thereby indicating her support for the Palestinian Arab objective of eliminating and replacing the Jewish state of Israel.

“The ZOA calls upon all pro-Israel organizations, Jewish and non-Jewish, and all decent Americans to urge Rep. Tlaib’s removal from the Democratic Party and Congressional committees,” wrote Klein and Levenson. “A terrible precedent will have been set if someone so obviously tainted with the most pernicious hatreds and associations does not inspire the party to which she belongs to expel her.

“In that case, the unmistakable message will have been sent that associating with vicious anti-Semites and terrorist shedders of innocent blood is no impediment to political office in the United States of America,” the message continued.

We would love to hear from you! Please fill out this form and we will get in touch with you shortly.
Trending Z
News April 30, 2019
ZOA Condemns U.S. State Dept. & U.S. Amb. Nides For Siding with Antisemitic, Discriminatory Palestinian & Hamas Terrorists re: the Temple Mount, Violating Jews’ Religious Freedom
News April 30, 2019
ZOA’s Klein JPost Op-Ed: There is Nothing Extreme About Israel’s New Government
Uncategorized April 30, 2019
FLASH: ISRAEL-JORDAN PEACE TREATY (1994) GUARANTEES JEWS ACCESS TO THE TEMPLE MOUNT – LET MY PEOPLE PRAY
Uncategorized April 30, 2019
ZOA Analysis: Most American Rabbis Who Are Boycotting Some Israeli Ministers Are From Extremist Left Wing Groups (J Street; T’ruah; JVP)
Center for Law & Justice
We work to educate the American public and Congress about legal issues in order to advance the interests of Israel and the Jewish people.
We assist American victims of terrorism in vindicating their rights under the law, and seek to hold terrorists and sponsors of terrorism accountable for their actions.
We fight anti-Semitism and anti-Israel bias in the media and on college campuses.
We strive to enforce existing law and also to create new law in order to safeguard the rights of the Jewish people in the United States and Israel.
Our Mission
ZOA STATEMENT
The ZOA speaks out for Israel – in reports, newsletters, and other publications. In speeches in synagogues, churches, and community events, in high schools and colleges from coast to coast. In e-mail action alerts. In op-eds and letters to the editor. In radio and television appearances by ZOA leaders. Always on the front lines of pro-Israel activism, ZOA has made its mark.
Related Articles
OP-ED BY: Isi Leiber, The Jerusalem Post Responding to Obama’s Malicious Betrayal of Israel

Amid American Jewish criticism over Otzma Yehudit Party, concern arises about language By Sean Savage and Jackson Richman (February 26, 2019 / JNS) The fallout over the recent merger of Otzma Yehudit with the Jewish Home Party—a bid by Israeli Prime Minister Benjamin Netanyahu to bolster his right-wing coalition ahead of April 9 elections—appears to […]