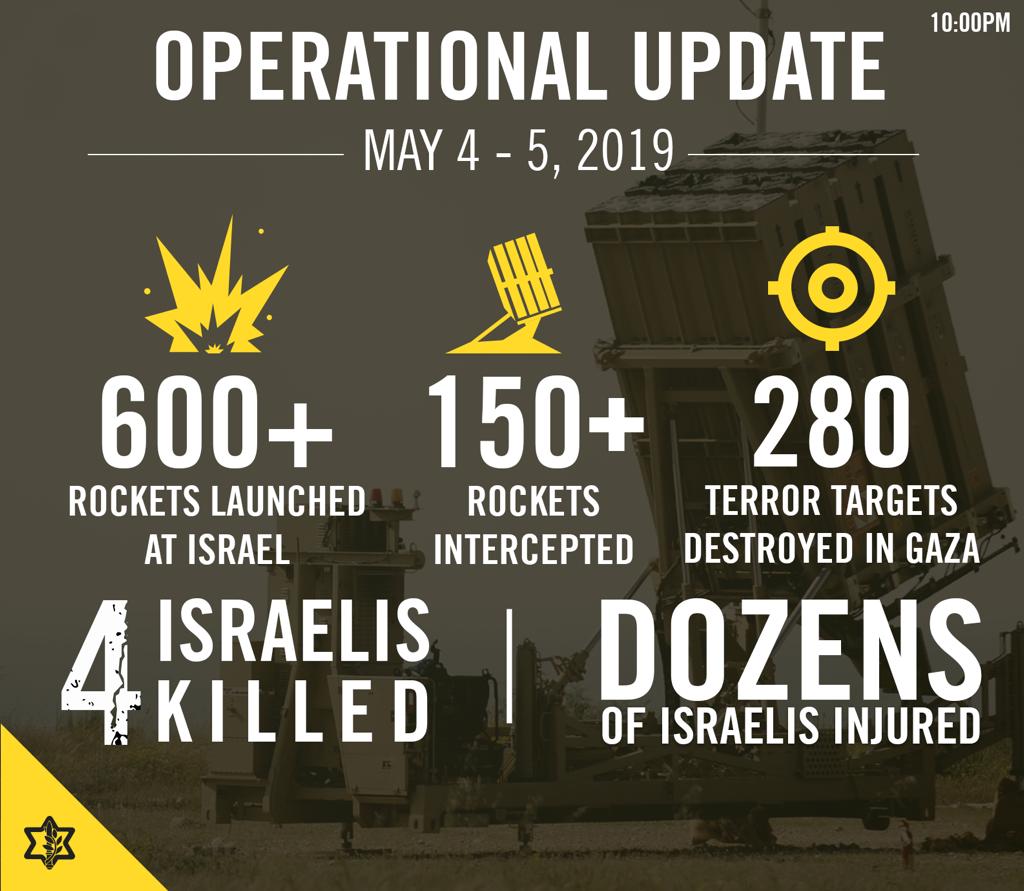 The Zionist Organization of America condemns the horrific, bloodthirsty antisemitic Nazi-like Arab-Islamic rocket attacks on Israel this past weekend, by Arab Islamic terrorists Hamas and Palestinian Islamic Jihad (PIJ). Hamas and PIJ launched almost 700 rockets at Israeli civilians, murdering four innocent Israeli citizens, including a father of four children whose car was hit; a 21-year-old who was hit and killed while running for a shelter in Ashdod; and two civilians who were hit by rocket shrapnel in Ashkelon (a city 13 miles from Gaza). The Hamas and PIJ rockets also injured another 80 innocent Jews. (See “Four Israelis Dead, 700 Rockets and a Weekend Full of Terror In Israel,” Jerusalem Post, May 6, 2019.)

The ZOA also condemns the Islamic Republic of Iran for funding these Islamic attacks and former President Barack Hussein Obama, who promoted the catastrophic Iran Deal, which gave Iran over $100 billion, used by Iran to fund Islamic terrorists PIJ, Hamas, and Iran’s other terror proxies.

When Obama announced the Iran deal in 2015, ZOA correctly predicted: “This deal will result in the freeing up of $150 billion in frozen Iranian assets and will also result in tens of billions of dollars in sanctions relief for Iran each year.  With this stupendous windfall, Iran will dramatically increase its funding for radical Islamic terror groups, especially for Hezbollah and Hamas. Only last month, Iran gave Hamas tens of millions of dollars and provided Hezbollah with tens of thousands of missiles to use against Israel. Both of these Islamic terror groups, committed to Israel’s destruction and the murder of Jews, can be expected to receive literally tens of thousands of new missiles to target Israel in the months and years ahead.” (“ZOA: Iran Nuclear Deal Is A Catastrophe,” July 14, 2015.)

The ZOA also thanks President Donald Trump, Vice President Mike Pence and Chair of House Foreign Affairs Committee, Elliot Engel (D-NY) and many bipartisan members of Congress for their 100% support of Israel and the Jewish people who are being subjected to antisemitic horror from Iran, Hamas and PIJ. We did not see any statements of support for Israel from the presidential candidates.

President Trump tweeted: “Once again, Israel faces a barrage of deadly rocket attacks by terrorist groups Hamas and Islamic Jihad.  We support Israel 100% in its defense of its citizens….” and “….To the Gazan people — these terrorist acts against Israel will bring you nothing but more misery. END the violence and work towards peace – it can happen!

”Vice President Pence tweeted: “We strongly condemn the attacks in Gaza by Hamas terrorists. Israel has the absolute right to defend itself & the U.S. stands by our great ally Israel.”

House Republican leader Kevin McCarthy tweeted: “Israel has every right to defend itself against the 600 rockets that Hamas has fired during the last 48 hours. The United States will continue to stand with our ally Israel and the Jewish people.”

Senate Minority Leader Chuck Schumer (D-NY) said in a statement to Jewish Insider, “Israel has every right to defend herself from indiscriminate rockets attacks, the same right as any other nation. The United States stands shoulder-to-shoulder with the people of Israel.”

Many others from both sides of the aisle issued statements supporting Israel and her people.

Despicably however, antisemitic Israel hating Congresswomen Ilhan Omar (D-MN) and Rashida Tlaib (D-MI) criticized Israel – the victim here! Omar’s and Tlaib’s “always blame the Jews” statements once again demonstrate why they must be removed from their committee positions.

We would love to hear from you! Please fill out this form and we will get in touch with you shortly.
Trending Z
Uncategorized May 6, 2019
ZOA Analysis: Most American Rabbis Who Are Boycotting Some Israeli Ministers Are From Extremist Left Wing Groups (J Street; T’ruah; JVP)
Uncategorized May 6, 2019
ZOA: Israel’s Reasonable Judicial Reform Proposals Are Good for Democracy, the Rule of Law and the Economy
News May 6, 2019
ZOA is Disappointed, Offended and Frightened by 211 U.S. House Votes Supporting Jew-Hating, Israel-Hating Rep. Ilhan Omar
Uncategorized May 6, 2019
Israel’s “Right of Return” Grandparent Clause is De-Judaizing the Jewish State – Eliminate It
Center for Law & Justice
We work to educate the American public and Congress about legal issues in order to advance the interests of Israel and the Jewish people.
We assist American victims of terrorism in vindicating their rights under the law, and seek to hold terrorists and sponsors of terrorism accountable for their actions.
We fight anti-Semitism and anti-Israel bias in the media and on college campuses.
We strive to enforce existing law and also to create new law in order to safeguard the rights of the Jewish people in the United States and Israel.
Our Mission
ZOA STATEMENT
The ZOA speaks out for Israel – in reports, newsletters, and other publications. In speeches in synagogues, churches, and community events, in high schools and colleges from coast to coast. In e-mail action alerts. In op-eds and letters to the editor. In radio and television appearances by ZOA leaders. Always on the front lines of pro-Israel activism, ZOA has made its mark.
Related Articles
OP-ED BY: ZOA Staff ZOA Condemns Kerry For Supporting Iran’s Outrageous Demands Despite Violations