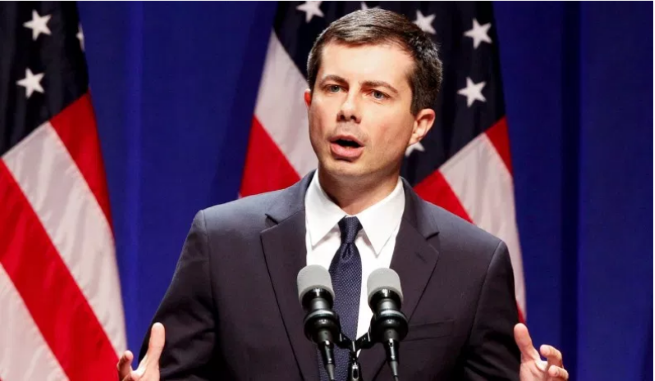 The Zionist Organization of America is appalled by Mayor Pete Buttigieg’s plans to reinstate the catastrophic Iran deal, and to penalize Israel if Israel annexes Jewish communities on Judean/Samarian lands, where 450,000 Jews live on less than 2% of Judea/Samaria, that are lawfully designated for the Jewish homeland under binding international law. Buttigieg announced his pro-Islamic terror state Iran, hostile-to-Israel policies during his June 11 “foreign policy” speech at Indiana University.

Buttigieg is either frighteningly ignorant or an Israelophobe. Buttigieg wrongly praised the Iran deal as “as close to a true ‘art of the deal’ as it gets” and “in our national security interest” – and falsely claimed that the deal “has helped constrain the military threat that Iran poses to Israel and Europe without leading up down a path to another Middle Eastern war.” (Buttigieg June 11 speech, C-Span, minute 31:00)

In fact, the Iran deal has been a disaster. The deal didn’t stop Iran’s development and testing of ballistic missiles for carrying nuclear warheads. Israel, Europe, U.S. military bases and the U.S. mainland are within range of the ballistic missiles Iran is developing. The deal doesn’t allow IAEA (International Atomic Energy Agency) inspectors to access Iran’s military installations and undeclared locations for nuclear development. Contractually, Iran can openly move to develop nukes after 10 years from now. The deal also gave Iran a $150 billion windfall and piles of cash that enabled Iran to massively increase its nefarious terrorist activities and proxy wars against Israel and throughout the Middle East. Iran has been shooting missiles and drones into Israel from Syria and financing aggression by Hezbollah, Hamas and the Houthis, to name a few. The Iran deal permits Iran to continue enriching uranium – a provision completely incompatible with non-proliferation. The deal moreover allows Iran to develop the advanced centrifuges that will enable Iran to enrich uranium to weapons-grade level. In other words, even if Iran followed the deal, the deal paves Iran’s way to a nuclear bomb. And now, Iran is attacking oil tankers and engaging in nuclear blackmail. (See also, e.g., “ZOA/45 Other Experts Send Letter to Trump Urging End Iran Deal,” Sept. 27, 2017; “ZOA to Pres. Trump: Decertify Disastrous Iran Deal, Reimpose Non-Nuclear Sanctions,” Oct. 11, 2017; “ZOA Praises African-American Democratic Cong. David Scott For Opposing Iran Deal,” Aug. 14, 2015.)

Interestingly, earlier in his speech, Buttigieg asserted that Democrats cannot “turn the clock back to the 1990s.” (Buttigieg June 11 speech, C-Span, minute 21:15) However, Buttigieg’s plan to reinstate the Iran deal turns the clock back to the 1990s and 2000s, when the U.S. hid its head in the sand, and failed to properly assess Iran’s nuclear weapons developments and enrichment activities. (See, e.g., Institute for Science and International Security, Weaknesses in the 2007 [U.S.] NIE [National Intelligence Estimate].)

Buttigieg repeatedly spoke about focusing on the future. Yet, re-entering the failed Iran deal would reenact and exacerbate one of the worst mistakes of the past.

Buttigieg repeatedly spoke about focusing on the future. Yet, re-entering the failed Iran deal would reenact and exacerbate one of the worst mistakes of the past.

Buttigieg’s accusations are an apt description of Buttigieg’s own positions.  By announcing he will re-enter the Iran deal, Buttigieg is “embracing and emboldening autocrats” and ignoring that the Senate never approved the deal. The Iran deal is not a U.S. treaty. And, by threatening to penalize Israel, Buttigieg is “alienating democracies and allies” and undermining America’s alliances and treaty obligations. A binding U.S. treaty, the 1924 Anglo-American Convention [Treaty], ratified by the U.S. Senate in 1925, confirmed the Jewish people’s right to “close settlement by Jews on the land” (Article 6), and reconstitution and establishment of the Jewish national home (Preamble and Article 2), in the British Mandate for Palestine – an area that includes the Jewish communities in Judea/Samaria that Israel may annex.

During the same speech, Buttigieg also falsely claimed that there are “increasingly disturbing signs that the Netanyahu government is turning away from peace.” Buttigieg is blaming the wrong party for the lack of peace. Buttigieg ignored that it is the Palestinian Authority (PA) that repeatedly rejected over-generous peace offers of a Palestinian State, refused to negotiate with Netanyahu throughout the past decade even though Israel has approved hardly any new building in Judea/Samaria/Eastern Jerusalem, constantly incites terror against Jews and Christians in schools, textbooks, media, television, broadcasted government speeches, and in government-controlled Imams in mosques, and that continues to pay Arab terrorists $400 million dollars/year of pay-to-slay payments per year, to murder Jews.

During the same speech, Buttigieg also falsely partly blamed “policies of the current Israeli government” for a “humanitarian crisis in Gaza.” In fact, Hamas, Palestinian Islamic Jihad, and their sponsor Iran, are solely responsible for conditions in Gaza. Two hundred trucks a day deliver massive amounts of humanitarian supplies from Israel to Gaza. Hamas redirects such supplies to build its terror weapons and terror infrastructure, and Hamas’s rioters repeatedly set fire to the gas lines – causing millions of dollars of damage and cynically preventing fuel sent by Israel from reaching Gazan civilians.

Buttigieg also invoked the “demography” argument – an argument straight from the playbook of hostile-to-Israel groups, such as J Street. These groups overstate Israel’s Arab population to misleadingly argue that it is necessary to create a Palestinian-Arab (terror) state. Notably, Israel’s Jewish native population has been increasing at a faster clip than the Arabs and rampant Islamic antisemitism in Western Europe is bringing new Jewish immigrants into Israel. (See, e.g., “Time to End Demographic Fear-Mongering,” by Caroline Glick, Jerusalem Post, Mar. 29, 2018.)

Of particular note, Buttigieg adopted J Street’s patronizing, Orwellian stance that America should express its “friendship” to Israel by: adopting tough hostile-to-Israel policies; pressuring Israel to appease the PA regime that is dedicated to Israel’s destruction; undermining and condemning Israel’s democratically-elected government; and promoting as the “only option” the establishment of a Palestinian-Arab state that would be a mortal danger to Israel.

Why is Buttigieg protecting and ignoring the danger of Islamic terrorism and Islamic antisemitism?! (Buttigieg June 11 speech, C-Span, minute 35:00)

Both Islamic and neo-Nazi terrorism must be combatted. Resources must be available to combat both scourges, without redirecting resources away from combatting Islamic terrorism.

Buttigieg’s pro-Iran, Israelophobic foreign policy speech and policies are particularly disappointing because Buttigieg was previously touted as a rare pro-Israel Democratic presidential voice. In January, Buttigieg asserted: “People like me [gay] get strung up in Iran,” and disagreed with Rep. Ilhan Omar’s ludicrous comparison of Israel to Iran. At that time, Buttigieg also condemned “simple answers” regarding Israel. (Video) Unfortunately, Buttigieg has adopted such simplistic wrong solutions now.

ZOA hopes that Buttigieg will remember how Iran would treat him and his partner, and the Jewish State and America and the West, and rethink his plan to reenter the Iran deal and thereby enable and embolden the Iranian Islamic terror regime. And we hope Buttigieg comes to understand the relentless Arab/Islamic war against Israel and the West. Buttigieg must become aware that the Palestinian Arabs were offered Statehood in 1937, 1947, 2000, 2001, 2008, and 2014 and rejected it each time because it required accepting Israel and ending all further claims.

We would love to hear from you! Please fill out this form and we will get in touch with you shortly.
Trending Z
News June 17, 2019
ZOA Condemns U.S. State Dept. & U.S. Amb. Nides For Siding with Antisemitic, Discriminatory Palestinian & Hamas Terrorists re: the Temple Mount, Violating Jews’ Religious Freedom
Uncategorized June 17, 2019
FLASH: ISRAEL-JORDAN PEACE TREATY (1994) GUARANTEES JEWS ACCESS TO THE TEMPLE MOUNT – LET MY PEOPLE PRAY
Uncategorized June 17, 2019
ZOA Analysis: Most American Rabbis Who Are Boycotting Some Israeli Ministers Are From Extremist Left Wing Groups (J Street; T’ruah; JVP)
Uncategorized June 17, 2019
Israel’s “Right of Return” Grandparent Clause is De-Judaizing the Jewish State – Eliminate It
Center for Law & Justice
We work to educate the American public and Congress about legal issues in order to advance the interests of Israel and the Jewish people.
We assist American victims of terrorism in vindicating their rights under the law, and seek to hold terrorists and sponsors of terrorism accountable for their actions.
We fight anti-Semitism and anti-Israel bias in the media and on college campuses.
We strive to enforce existing law and also to create new law in order to safeguard the rights of the Jewish people in the United States and Israel.
Our Mission
ZOA STATEMENT
The ZOA speaks out for Israel – in reports, newsletters, and other publications. In speeches in synagogues, churches, and community events, in high schools and colleges from coast to coast. In e-mail action alerts. In op-eds and letters to the editor. In radio and television appearances by ZOA leaders. Always on the front lines of pro-Israel activism, ZOA has made its mark.
Related Articles
OP-ED ZOA: NSC’s McMaster – Reassign Him to Area Not Dealing with Israel or Iran