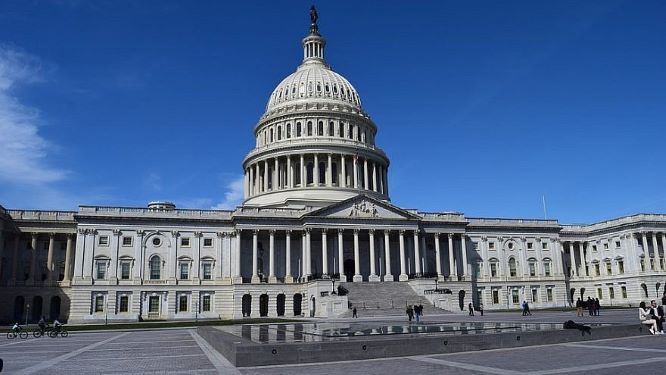 The Zionist Organization of America (ZOA) strongly praised the U.S. Senate for its bipartisan unanimous passing a resolution against Anti-Semitism yesterday.

Sen. Ted Cruz (R-TX) and Tim Kaine (D-VA) joined together in introducing the bipartisan resolution, S. Res. 189, which stated: “Resolved, That the United States Senate condemns and commits to combatting all forms of antisemitism.” There were 53 co-sponsors of the legislation from both parties.

“This is the response we expected from the U.S. Senate in light of the horrible increase in hatred targeting American Jews.”

This measure is particularly important and relevant  in light of the brutal recent murders at synagogues in Pittsburgh and Poway, California, and the inability of the House to pass similar legislation in light of anti Semitic and Israelophobic remarks by Cong. Ilhan Omar (D-MN) and Rashida Tlaib (D-MI).  Instead, the House of Representatives passed a relatively meaningless generic resolution deploring hatred of all kinds.

ZOA National President Morton Klein said: “This is the response we expected from the U.S. Senate in light of the horrible increase in hatred targeting American Jews. Anti-Semitism has even been heard in the halls of the U.S. Congress in quotes from two Congresswomen who have not been disciplined by their peers for completely unacceptable anti-Semitic, Israelophobic statements.”

The ZOA Government Relations Department was heavily involved in working for the passage of this resolution. “We brought it up with every Senator we could since the resolution was conceived by Senator Cruz,” said ZOA Government Relations Director Dan Pollak. “We heard only positive responses to the resolution, so we were optimistic it would pass quickly.” ZOA Deputy Director Joel Kassiday agreed: “The resolution pointed out that Jews are the targets of the clear majority of hate crimes committed in the United States against religious groups.”

The ZOA continues to lobby for passage of a resolution condemning anti-Semitism in the House of Representatives, and also explicitly name and condemn Rep. Rashida Tlaib (D-MI) and Ilhan Omar (D-MN) for their deplorable anti-Semitic, Israelophobic statements. ZOA supports resolutions that have been introduced in the House by Rep. Lee Zeldin (R-NY) [H. Res. 72] and Rep. Greg Steube (R-FL) [H. Res. 241].

We would love to hear from you! Please fill out this form and we will get in touch with you shortly.
Trending Z
Uncategorized June 14, 2019
FLASH: ISRAEL-JORDAN PEACE TREATY (1994) GUARANTEES JEWS ACCESS TO THE TEMPLE MOUNT – LET MY PEOPLE PRAY
Uncategorized June 14, 2019
ZOA Analysis: Most American Rabbis Who Are Boycotting Some Israeli Ministers Are From Extremist Left Wing Groups (J Street; T’ruah; JVP)
Uncategorized June 14, 2019
Israel’s “Right of Return” Grandparent Clause is De-Judaizing the Jewish State – Eliminate It
Uncategorized June 14, 2019
Exclusive: ZOA Accuses Ilhan Omar of Hating the U.S. ‘as Much as Israel,’ Lauds Kevin McCarthy for ‘Throwing Her Off the HFAC’
Center for Law & Justice
We work to educate the American public and Congress about legal issues in order to advance the interests of Israel and the Jewish people.
We assist American victims of terrorism in vindicating their rights under the law, and seek to hold terrorists and sponsors of terrorism accountable for their actions.
We fight anti-Semitism and anti-Israel bias in the media and on college campuses.
We strive to enforce existing law and also to create new law in order to safeguard the rights of the Jewish people in the United States and Israel.
Our Mission
ZOA STATEMENT
The ZOA speaks out for Israel – in reports, newsletters, and other publications. In speeches in synagogues, churches, and community events, in high schools and colleges from coast to coast. In e-mail action alerts. In op-eds and letters to the editor. In radio and television appearances by ZOA leaders. Always on the front lines of pro-Israel activism, ZOA has made its mark.
Related Articles
OP-ED ZOA: NSC’s McMaster – Reassign Him to Area Not Dealing with Israel or Iran