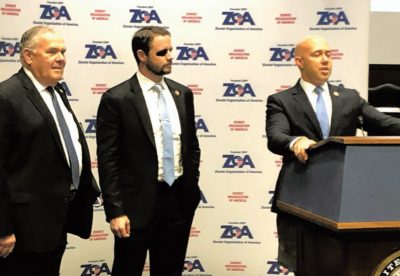 Eighty Zionist activists from around the country attended a dinner featuring Rep. Liz Cheney (R-Wyo.). Cheney, the third-ranking Republican in the House of Representatives, gave an impassioned speech defending Israel, while attacking members of Congress who have recently promoted BDS and anti-Semitism.

Paul Teller, special assistant to the president in the Office of Legislative Affairs, also addressed the group, stating, “I’m such a huge fan of ZOA. It’s amazing how many groups say they are pro-Israel. ZOA means it.”

“It’s not a problem to show something pro-Israel in this White House,” he added.

Our delegation increased threefold the following day as over two dozen senators and representatives addressed us. The focus of the 2019 Mission was to combat anti-Semitism and the Iranian threat.

Rep. Eliot Engel (D-N.Y.) opened the morning by stating that the bond between Israel and the U.S. must remain forever. Sen. Rick Scott (R-Fla.) followed by mentioning his three trips to Israel while serving as governor of Florida and his attendance, as the only governor, at the opening of the U.S. embassy in Jerusalem last year.

Rep. Brian Mast (R-Fla.) gave an emotional presentation while flanked by Rep. Dan Crenshaw (R-Texas) and Rep. Jim Baird (R-Ind.). Mast lost both his legs in Afghanistan, Crenshaw lost an eye in the same country, and Baird lost an arm in Vietnam. Mast said he “does not think it is a good idea to give terrorists their own state.”

Crenshaw followed by commenting, “Europe is losing its sense of self as Jews are attacked.” He further opined the U.S. would not tolerate thousands of rockets being fired from a next-door neighbor, such as Gaza.The ZOA activists then attended dozens of meetings in the offices of their representatives and senators. We lobbied for legislation to combat anti-Semitism, including four bills introduced or sponsored by Republicans that disapprove of recent comments by Rep. Ilhan Omar (D-Minn.); stand up for the principles of religious tolerance found in the Constitution; and require the Department of Education to protect Jewish students under the Civil Rights Act.

Our New Hampshire group lobbied representatives on four bills currently in the House and Senate, all introduced by Republicans, that would expand sanctions against Iran because of its ballistic missile program and support for terrorism.

The original article was posted in The Jewish Advocate and can be found here.

We would love to hear from you! Please fill out this form and we will get in touch with you shortly.
Trending Z
News July 18, 2019
ZOA Deplores that Pres. Trump Dined with Jew-Haters Kanye West & Nick Fuentes, and Demands he Condemn Them
Uncategorized July 18, 2019
ZOA Honors Trump With Rarely Given Herzl Award for His Great Pro-Israel Work – Joins Ranks of Balfour, Truman, Begin, Meir, Ben-Gurion
News July 18, 2019
ZOA Responds to Questions About Pres. Trump, Kanye West, Fuentes, etc. Issue
Uncategorized July 18, 2019
Zionist Organization of America Honors Donald Trump for Support for Israel, Jewish Community
Center for Law & Justice
We work to educate the American public and Congress about legal issues in order to advance the interests of Israel and the Jewish people.
We assist American victims of terrorism in vindicating their rights under the law, and seek to hold terrorists and sponsors of terrorism accountable for their actions.
We fight anti-Semitism and anti-Israel bias in the media and on college campuses.
We strive to enforce existing law and also to create new law in order to safeguard the rights of the Jewish people in the United States and Israel.
Our Mission
ZOA STATEMENT
The ZOA speaks out for Israel – in reports, newsletters, and other publications. In speeches in synagogues, churches, and community events, in high schools and colleges from coast to coast. In e-mail action alerts. In op-eds and letters to the editor. In radio and television appearances by ZOA leaders. Always on the front lines of pro-Israel activism, ZOA has made its mark.
Related Articles
OP-ED Jewish Fraternity ZBT Says: Contact ZOA With Any Campus Anti-Semitism Issues

The Icelandic lawmaker who proposed a controversial ban on circumcision told The Algemeiner in an interview this week that her bill does not violate religious freedom. Silja Dögg Gunnarsdóttir of the Progressive party recently introduced the legislation in the Icelandic Parliament, where it is currently being debated. It proposes a blanket ban on male circumcision […]