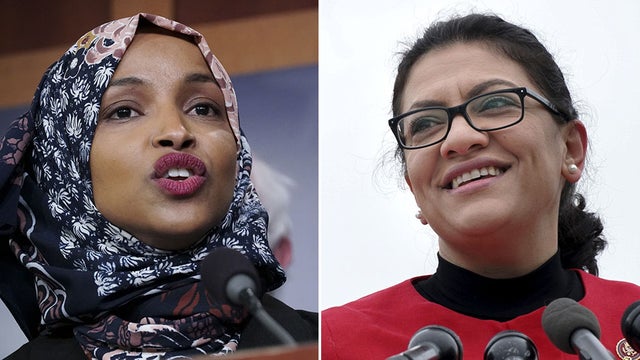 Notably, Ilhan Omar lied about her BDS position prior to her election to Congress, and only revealed that she supports and promotes BDS after she was elected.  But perhaps we shouldn’t be surprised by Omar’s pro-BDS resolution – because ZOA’s analysis of Omar’s federal election filings revealed that Omar is financially backed by the leaders of the antisemitic, anti-Israel BDS movement (among other Israel-haters and America-haters).

Reps. Omar and Tlaib absurdly and falsely attempt to portray discriminatory anti-Jewish BDS boycotts as “peaceful” “civil and human rights” boycotts. In fact, BDS is closely allied with designated foreign terror groups, and aims to delegitimize and destroy the Jewish state. The recent Israeli Ministry of Foreign Affairs report, “Terrorists in Suits,” exposed in great detail that BDS organizations are populated with Popular Front for the Liberation of Palestine (PFLP) and Hamas terror operatives.

It is especially despicable that Rep. Omar’s resolution analogizes the antisemitic anti-Israel boycotts to Americans who boycotted Nazi Germany in the 1930s.

Omar’s resolution also lies about history:  H. Res. 496 asserts that the American boycott of the Nazis was “in response to the dehumanization of the Jewish people” instead of acknowledging the truth:  The American boycott of Nazi Germany was in retaliation for the 1933 Nazi boycott of Jewish-owned businesses and Jewish professionals.

The Nazi anti-Jewish boycott was the first official Nazi act of discrimination against the Jewish people, and set the stage for the Holocaust.  Omar’s resolution thus misleadingly refuses to mention or acknowledge the Nazis’ anti-Jewish boycotts, and the horrors that stemmed from those boycotts.

That’s because Omar and Tlaib’s resolution seeks to justify the same sort of boycotts against the Jewish people that the Nazis engaged in.

Omar’s resolution also omits any mention of the Arab League boycott against the Jewish people, initiated in 1945.  That boycott went hand-in-hand with Arab pogroms in which Arabs murdered hundreds of Jews in Israel, and in Arab nations where Jewish communities had lived for thousands of years.  The Arab League boycott of Israel also presaged the 1948-1949 war initiated by six Arab nations to exterminate Israel and her people, and subsequent Arab wars to destroy the Jewish state.

To give just a few of many examples around the world: At City University of New York (CUNY), demonstrators held “Boycott Israel” signs along with signs demanding that “Zionists” (Jews) should be thrown out of CUNY, while dozens of demonstrators screamed and chanted support for the Palestinian-Arab “intifada” – the campaign to murder Jews: “Long live the intifada!” and “There is only one solution:  Intifada revolution!”

To try to achieve this, Omar’s resolution misleadingly cites two inapplicable legal cases.  The first case, Rosenblatt v. Baer, 383 US 75 (1966), has nothing to do with the constitutionality of boycotts.  Rosenblatt was a defamation speech case that held that government officials need to show actual malice to prevail in a libel suit.

The second case, NAACP v. Claiborne Hardware Co., 458 U.S. 886 (1982), merely stated that the peaceable portions of a particular boycott were permissible in that specific case.  Claiborne does not immunize all peaceful boycotts.  Indeed, Claiborne explained that:

“The presence of protected activity [] does not end the relevant constitutional inquiry. . . . A nonviolent and totally voluntary boycott may have a disruptive effect on local economic conditions. This Court has recognized the strong governmental interest in certain forms of economic regulation, even though such regulation may have an incidental effect on rights of speech and association.”  (citations and examples omitted)

A recent law review article noted how absurd it is for the BDS movement to cite Claiborne, to try immunize unlawful BDS activities, as follows:

“It is curious that the BDS Movement attempts to cloak its unlawful activities with First Amendment protections using Claiborne. If there are any analogies between the facts of Claiborne and the BDS Movement’s current activities, it would be the connection between the racist and discriminatory policies promulgated by the store owners in Claiborne and the attempts by the BDS Movement to implement the same types of discriminatory policies against commerce tied to Israel (and thus, Jews) in the United States. Far from being civil rights activists, the BDS Movement is nothing more than a thinly-veiled hate group, reminiscent of those that operated in the American south at the time of Claiborne.”

“If American commerce is to be used as a weapon against foreign countries, it is up to the United States’ government to make that decision. Certainly an organization affiliated with and controlled by foreign nations and terrorists such as the BDS Movement should not outline the methodology and implementation of such policy. In fact, the only governmental action regarding boycotts of Israel has been to prohibit them.”

Omar’s and Tlaib’s resolution also makes the irrelevant argument that certain activities – which have nothing to do with boycotts – are “expressive activities” entitled to First Amendment protection.

Professor Kontorovich further succinctly and correctly explained that a boycotter’s “expressions of views are protected, but [the boycotter’s views] do not immunize the underlying economic conduct from regulation.”  (Id.)

Indeed, if expressions of views did immunize all economic activities, then U.S. sanctions on Iran or Russia, and all non-discrimination laws would be unconstitutional.

It is moreover constitutional to prohibit or penalize “expressive conduct” when the prohibition furthers an important or substantial government interest unrelated to the alleged suppression of free expression.

Further, as ZOA and others have repeatedly explained, anti-boycott laws properly target certain discriminatory economic activity – not speech.  Anti-BDS laws allow Jew-haters, America-haters and Israel-haters to continue to express their hateful views. Moreover, the anti-boycott laws allow Jew-haters to continue to boycott Jewish businesses and artists, etc. if they wish to do so; the laws simply say that someone cannot engage in such discriminatory anti-Jewish anti-Israel boycotts and also do business with the government.   (See, e.g., “Ilhan Omar’s Outrageous Anti-Israel Resolution Should Be Defeated in House,” by Jay Sekulow and Professor Mark Goldfeder, Fox News, July 19, 2019;“Texas’s Anti-BDS Law Should Be Upheld,” by Morton Klein and Elizabeth A. Berney, JNS, Dec. 27, 2018; “Why Opposing Anti-BDS Legislation is Wrong,” by Morton Klein, Elizabeth Berney, Esq. and Cliff Rieders, Esq., Jewish Exponent, June 17, 2015.)

Omar’s and Tlaib’s resolution also ignores that the federal laws aimed at the Arab League boycott of Israel, incorporated in the Export Administration Act (EAA) have been upheld as constitutional since they were enacted 40 years ago.  For instance, Karen Mar. Ltd. v. Omar Int’l, Inc., 322 F. Supp. 2d 224, 227 (E.D.N.Y. 2004) held:

“[EAA] Section 2407 is a constitutional statute. Congress enacted this law in response to the longstanding Arab boycott of Israel. Section 2407 was intended to stop the secondary and tertiary boycotts that Congress considered detrimental to both the United States and Israel. . . . Federal courts have also found that there is no First Amendment right to not ‘answer questions asked by Arab boycott offices pursuant to the Arabs’ trade boycott of Israel,’ Briggs & Stratton Corp. v. Baldrige, 728 F.2d 915, 916 (7th Cir.1984); and that § 2407, as applied, violates neither Fifth Amendment procedural or substantive due process rights, nor the Ninth Amendment rights, of American businesses.  See Trane Co. v. Baldrige, 552 F. Supp. 1378, 1391 (W.D.Wis.1983).”

It is downright frightening that Omar and Tlaib have the gall to introduce a resolution that attempts to immunize anti-Jewish boycotts, and to compare Jews and Israel to Nazis. It’s long-past time to push back and remove these hateful Congress members from their committees.

We would love to hear from you! Please fill out this form and we will get in touch with you shortly.
Trending Z
News July 19, 2019
At ZOA Gala Secy Pompeo Gave the Greatest, Most Pro-Israel Speech Ever Delivered by a Public Official
News July 19, 2019
Dershowitz in Arutz 7: NYC’s Temple Emanu-El Silences a Pro-Israel Voice & Promotes an Anti-Israel Voice
Uncategorized July 19, 2019
Jewish Press: Has Deborah Lipstadt Undercut Both Herself and Future Antisemitism Envoys?
News July 19, 2019
NEW YORK POST: Democratic Leaders’ Shocking Silence Over Attacks on Israel by Fellow Dems
Center for Law & Justice
We work to educate the American public and Congress about legal issues in order to advance the interests of Israel and the Jewish people.
We assist American victims of terrorism in vindicating their rights under the law, and seek to hold terrorists and sponsors of terrorism accountable for their actions.
We fight anti-Semitism and anti-Israel bias in the media and on college campuses.
We strive to enforce existing law and also to create new law in order to safeguard the rights of the Jewish people in the United States and Israel.
Our Mission
ZOA STATEMENT
The ZOA speaks out for Israel – in reports, newsletters, and other publications. In speeches in synagogues, churches, and community events, in high schools and colleges from coast to coast. In e-mail action alerts. In op-eds and letters to the editor. In radio and television appearances by ZOA leaders. Always on the front lines of pro-Israel activism, ZOA has made its mark.
Related Articles
OP-ED BY: ZOA Staff ADL “Studying” Whether to Oppose BDS in Judea/Samaria