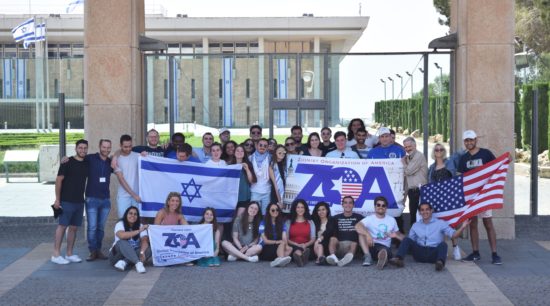 ZOA Letter in The Forward: Responding To False Attacks on ZOA’s Student Missions to Israel
Campus Press Release ZOA in the news

Last week, a story was published in these pages about campus trips to Israel run by the Zionist Organization of America. It wrongly argued that the ZOA is bribing young Jews to be pro-Israel.

In truth, American Jews do not need to be bribed to be pro-Israel; plenty of American Jews — and non-Jews — are already pro-Israel. If young Jews on American campuses want to deepen their connection to Israel, they are welcome to come on one of our ZOA trips.

Or not. It is their choice.

There is no bribery and no pressure.

But the trip is also not free. Trips like these cost thousands of dollars.

Our trips also include meetings with both Israelis and Palestinians; there is no “erasure of Palestinian voices” on ZOA trips. Our students get to meet Palestinians and speak openly with them.

Students also get to see Bedouins on our trips, including hundreds of Bedouin villages throughout the Negev and Judean desert. We show housing that the Israeli government is trying to build for Bedouins.

Our students also get to meet Arabs working in Judea and Samaria and speak with them freely. If these Arab workers failed to deliver the anti-Israel talking points that the oped’s author was hoping to hear, that does not mean that the ZOA told them what to say. In fact, that visit was a spur of the moment visit. We couldn’t have prepped them even if we had wanted to.

What does J Street let their people know, to reference another trip to Israel? Certainly not that Palestinians pay Arabs to murder Jews. Or that the Palestinian Authority just doubled the salary of the terrorist behind the murder of three teenage Israeli boys.

Is there a discussion on the J Street trip about the many times that Israel has offered peace, and the equal number of times those peace offerings were rejected by Palestinians — sometimes with diplomacy, sometimes with rockets, sometimes with knives?

Is there a discussion about the unique and inclusive nature of Israeli government, which allows dissent and opinion from all sides, including the right for Palestinians to elect their own representatives to the Knesset, who freely and openly criticize Israel?

Are J Street students allowed to know that Palestinians in Israel have their own police force? And better health care, personal freedom and more women’s rights than in any other place in the Middle East? And do they know that Jews only live on less than 2% of the land in Judea and Samaria? Would they prefer it to be only 1%? Or 0%?

A lot of good has been happening lately in the relationship between America and Israel. The United States abrogated the dangerous Iran Deal, ended all aid to the terror-funding PA, left the anti-Israel UN Human Rights Council, stopped funding the anti-Israel UNRWA, recognized Israel’s sovereignty over the strategically vital Golan Heights, and recognized Jerusalem as the capital of Israeland relocated the U.S. Embassy – which until only recently had bipartisan support.

Would the Forward or J Street “let their people know” how good these developments are for Israel, or do they slam them or censor them because they don’t happen to like the political party, or the people who made these good things happen?

If you love Israel, and see it truthfully as the one and only safe and tolerant place in the Middle East for all religions, all races and all viewpoints – and if you see the people of Israel as the open, inclusive, multi-racial and multi-cultural human beings they are – then by all means come on the next ZOA trip to Israel. Save your spot now by clicking here!

Mark Levenson, Esq., Chairman of the Zionist Organization of America

We would love to hear from you! Please fill out this form and we will get in touch with you shortly.
Trending Z
Uncategorized July 26, 2019
ZOA Analysis: Most American Rabbis Who Are Boycotting Some Israeli Ministers Are From Extremist Left Wing Groups (J Street; T’ruah; JVP)
Uncategorized July 26, 2019
ZOA: Israel’s Reasonable Judicial Reform Proposals Are Good for Democracy, the Rule of Law and the Economy
News July 26, 2019
ZOA is Disappointed, Offended and Frightened by 211 U.S. House Votes Supporting Jew-Hating, Israel-Hating Rep. Ilhan Omar
Uncategorized July 26, 2019
Israel’s “Right of Return” Grandparent Clause is De-Judaizing the Jewish State – Eliminate It
Center for Law & Justice
We work to educate the American public and Congress about legal issues in order to advance the interests of Israel and the Jewish people.
We assist American victims of terrorism in vindicating their rights under the law, and seek to hold terrorists and sponsors of terrorism accountable for their actions.
We fight anti-Semitism and anti-Israel bias in the media and on college campuses.
We strive to enforce existing law and also to create new law in order to safeguard the rights of the Jewish people in the United States and Israel.
Our Mission
ZOA STATEMENT
The ZOA speaks out for Israel – in reports, newsletters, and other publications. In speeches in synagogues, churches, and community events, in high schools and colleges from coast to coast. In e-mail action alerts. In op-eds and letters to the editor. In radio and television appearances by ZOA leaders. Always on the front lines of pro-Israel activism, ZOA has made its mark.
Related Articles
OP-ED BY: Sean Savage and Jackson Richman, Jewish News Syndicate JNS: ZOA Criticizes AIPAC/ADL/AJC Hypocrisy For Condemning Otzma, But Not Extreme Israeli Arab Parties

Amid American Jewish criticism over Otzma Yehudit Party, concern arises about language By Sean Savage and Jackson Richman (February 26, 2019 / JNS) The fallout over the recent merger of Otzma Yehudit with the Jewish Home Party—a bid by Israeli Prime Minister Benjamin Netanyahu to bolster his right-wing coalition ahead of April 9 elections—appears to […]

(May 9, 2019 / JNS) New York University has one of the largest number of Jewish college students in the country. But prospective students and their families, alumni and donors should know that the university has a deeply troubling anti-Semitism problem that it won’t acknowledge or address. Jewish students filed a complaint last month against […]