A New York Times spokesperson has responded hours later to a Breitbart News investigation into racist and antisemitic comments one of its political editors made on Twitter, saying the comments violate the newspaper’s standards and it is considering what to do next. 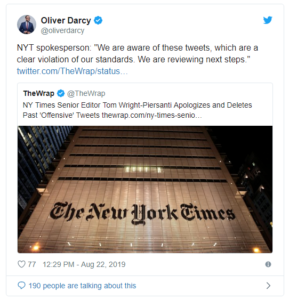 The statement, provided to The Wrap and quoted on Twitter by CNN writer Oliver Darcy, comes more than six hours after Breitbart News first published an exclusive expose into New York Times’ politics editor Tom Wright-Piersanti’s racist and antisemitic tweets. After Breitbart News’ original piece, Wright-Piersanti deleted many of the tweets admitting they were “offensive” and apologized.

In his apology, he does not explain why the tweets were “offensive” and brushes off the comments as “from a decade ago.” TheTimes, through spokeswomen Danielle Rhoades-Ha and Eileen Murphy, has not replied to repeated requests for comment from Breitbart News on whether they think his actions are enough, or whether Executive Editor Dean Baquet has become involved in this matter.

White House Press Secretary Stephanie Grisham told Breitbart News exclusively in response to the first piece exposing Wright-Piersanti that she and the White House were “disgusted” by the comments he made about Jews and others.

“I am disgusted but not surprised by this latest revelation out of the New York Times,” Grisham said in a statement provided exclusively to Breitbart News. “Will there be consequences? Doubtful. The New York Times is too busy weaponizing journalism to harass this President and the people who work for him to bother holding their own people accountable.”

Wright-Piersanti has been criticized from all sides in the wake of these revelations, as has the New York Times. In a phone interview on Thursday, Zionist Organization of America (ZOA) president Mort Klein called on the Times to fire him immediately and launch an internal review of the newspaper’s hiring practices and editorial processes.

“First of all, the New York Times should fire this editor immediately,” Klein, a leading pro-Israel voice in America, said. Klein continued:

If he had come out with tweets making these types of remarks against blacks or gays or women, he’d be gone in a nanosecond. Why is there a different standard when you attack Jewish people? So he should be fired immediately. With respect to the New York Times, the newspaper who for decades has been biased against and hostile to the Jewish state of Israel in article after article, editorial after editorial—a newspaper that only recently had the most vicious antisemitic cartoon, it should be a newspaper that is overly sensitive to refrain from appearing hostile to Jews and immediately take action against an antisemitic editor and make a public statement concerning this issue.

Murphy and Rhoades-Ha continue to refuse to answer whether the Times will proceed with a newspaper-wide review of editorial processes, hiring practices, and staff comments to determine if others exist in a place that has harbored Wright-Piersanti for more than five years despite these publicly available antisemitic and racist views. But Klein told Breitbart News that given this, plus the Times’ problems with antisemitic cartoons and other recent racist and antisemitic scandals inside the newspaper, a company-wide audit is a must–especially with rising antisemitism from leftist Democrats such as Reps. Alexandria Ocasio-Cortez (D-NY), Rashida Tlaib (D-MI), and Ilhan Omar (D-MN).

“I think given the decades of bias and bigotry against the Jewish state that has come from the New York Times, it is time to do a serious audit to determine why almost all of their reporters and all of their editorial writers are openly hostile to the Jewish state,” Klein said. Klein continued:

Their bigotry against Israel is so consistent, so pervasive, that it has to be more than a coincidence of some sort. They really should re-evaluate why they’re allowing this bias that they would never allow against blacks or gays or women or hispanics. Why are they allowing this against Jews? In an era of rising antisemitism and attacks against Jewish people, and overt antisemitism from Congresswomen like Tlaib, Omar, and AOC, it is a time where the New York Times should be especially sensitive to not increasing enmity toward the Jewish state of Israel and the Jewish people.

Trump campaign adviser Katrina Pierson added that the Times should hire an outside counsel, an independent law firm, to conduct the company-wide review into antisemitism and racism pervasive throughout the newspaper.

“Combined with other recent scandals like the publication of antisemitic cartoons and racist tweets that led to the demotion of another political editor in the Times’ newsroom, it is long past time for the New York Times to hire an independent outside counsel legal firm to conduct a thorough review of the newspaper’s entire staff, hiring practices, and all editorial processes,” Pierson told Breitbart News.

Several others, including many top Republicans such as Rep. Lee Zeldin (R-NY)–a Republican Congressman from New York who is Jewish–have called on the Times to take action and clean up its organization.

It remains to be seen what will happen next, but now that the Times in its first statement on the matter has confirmed the tweets were a violation of its rules, action appears to be on the horizon.

To view the original article published in Breitbart, click here.

We would love to hear from you! Please fill out this form and we will get in touch with you shortly.
Trending Z
Uncategorized August 27, 2019
ZOA Analysis: Most American Rabbis Who Are Boycotting Some Israeli Ministers Are From Extremist Left Wing Groups (J Street; T’ruah; JVP)
Uncategorized August 27, 2019
ZOA: Israel’s Reasonable Judicial Reform Proposals Are Good for Democracy, the Rule of Law and the Economy
News August 27, 2019
ZOA is Disappointed, Offended and Frightened by 211 U.S. House Votes Supporting Jew-Hating, Israel-Hating Rep. Ilhan Omar
Uncategorized August 27, 2019
Israel’s “Right of Return” Grandparent Clause is De-Judaizing the Jewish State – Eliminate It
Center for Law & Justice
We work to educate the American public and Congress about legal issues in order to advance the interests of Israel and the Jewish people.
We assist American victims of terrorism in vindicating their rights under the law, and seek to hold terrorists and sponsors of terrorism accountable for their actions.
We fight anti-Semitism and anti-Israel bias in the media and on college campuses.
We strive to enforce existing law and also to create new law in order to safeguard the rights of the Jewish people in the United States and Israel.
Our Mission
ZOA STATEMENT
The ZOA speaks out for Israel – in reports, newsletters, and other publications. In speeches in synagogues, churches, and community events, in high schools and colleges from coast to coast. In e-mail action alerts. In op-eds and letters to the editor. In radio and television appearances by ZOA leaders. Always on the front lines of pro-Israel activism, ZOA has made its mark.
Related Articles
OP-ED JTA: ZOA Calls On Secy/State Tillerson to Resign Over Israel-Hating Report On Terrorism