Zionist Organization of America President Morton Klein slammed Linda Sarsour over her smearing of pro-Israel Americans, in a statement provided Tuesday exclusively to The Daily Caller.

“Sarsour will make up any story, any lie, to blame, demonize and smear (BDS tactics) Israel and the Jewish people,” Klein told TheDC.

“Sarsour is the one who stands with terrorists and bigots, including Louis Farrakhan. Sarsour shared a platform with and praised Rasmea Odeh – a Palestinian-Arab terrorist responsible for murdering Jewish students; praised an Arab kid holding rocks to throw at Israelis as ‘the definition of courage,’ and tweeted her support for the intifada – the knifing, bombing and shooting campaigns in which Palestinian-Arab terrorists murdered and maimed 12,000 Jews,” the statement reads.

On Tuesday, TheDC covered the news that Sarsour baselessly accused a group of pro-Israel Americans of marching alongside the Ku Klux Klan.(RELATED: Linda Sarsour Declares ‘Jihad’ Against Trump)

In March, an event Sarsour held was protested by a group of demonstrators holding American flags and Israeli flags. Sarsour–with no evidence–claimed that the protesters were flying Confederate flags and marching with KKK members. 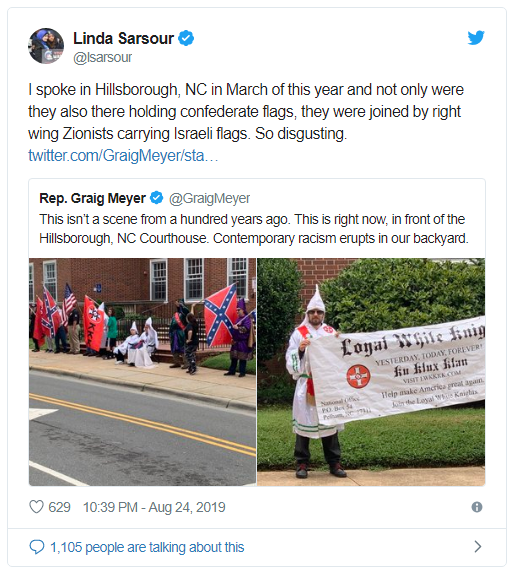 Photos and videos from that day do not support Sarsour’s claims at all. 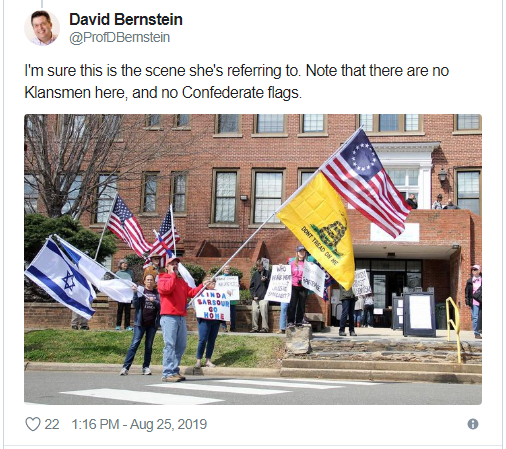 The Women’s March organizer has been a critic of Israel and repeatedly associated with anti-Semites like Louis Farrakhan. She has also lashed out at what she calls the “Jewish media.”

Click here to view the original article in the Daily Caller.

We would love to hear from you! Please fill out this form and we will get in touch with you shortly.
Trending Z
News September 5, 2019
ZOA Condemns U.S. State Dept. & U.S. Amb. Nides For Siding with Antisemitic, Discriminatory Palestinian & Hamas Terrorists re: the Temple Mount, Violating Jews’ Religious Freedom
News September 5, 2019
ZOA’s Klein JPost Op-Ed: There is Nothing Extreme About Israel’s New Government
Uncategorized September 5, 2019
FLASH: ISRAEL-JORDAN PEACE TREATY (1994) GUARANTEES JEWS ACCESS TO THE TEMPLE MOUNT – LET MY PEOPLE PRAY
Uncategorized September 5, 2019
ZOA Analysis: Most American Rabbis Who Are Boycotting Some Israeli Ministers Are From Extremist Left Wing Groups (J Street; T’ruah; JVP)
Center for Law & Justice
We work to educate the American public and Congress about legal issues in order to advance the interests of Israel and the Jewish people.
We assist American victims of terrorism in vindicating their rights under the law, and seek to hold terrorists and sponsors of terrorism accountable for their actions.
We fight anti-Semitism and anti-Israel bias in the media and on college campuses.
We strive to enforce existing law and also to create new law in order to safeguard the rights of the Jewish people in the United States and Israel.
Our Mission
ZOA STATEMENT
The ZOA speaks out for Israel – in reports, newsletters, and other publications. In speeches in synagogues, churches, and community events, in high schools and colleges from coast to coast. In e-mail action alerts. In op-eds and letters to the editor. In radio and television appearances by ZOA leaders. Always on the front lines of pro-Israel activism, ZOA has made its mark.
Connect with us
Sign up for our Newsletter