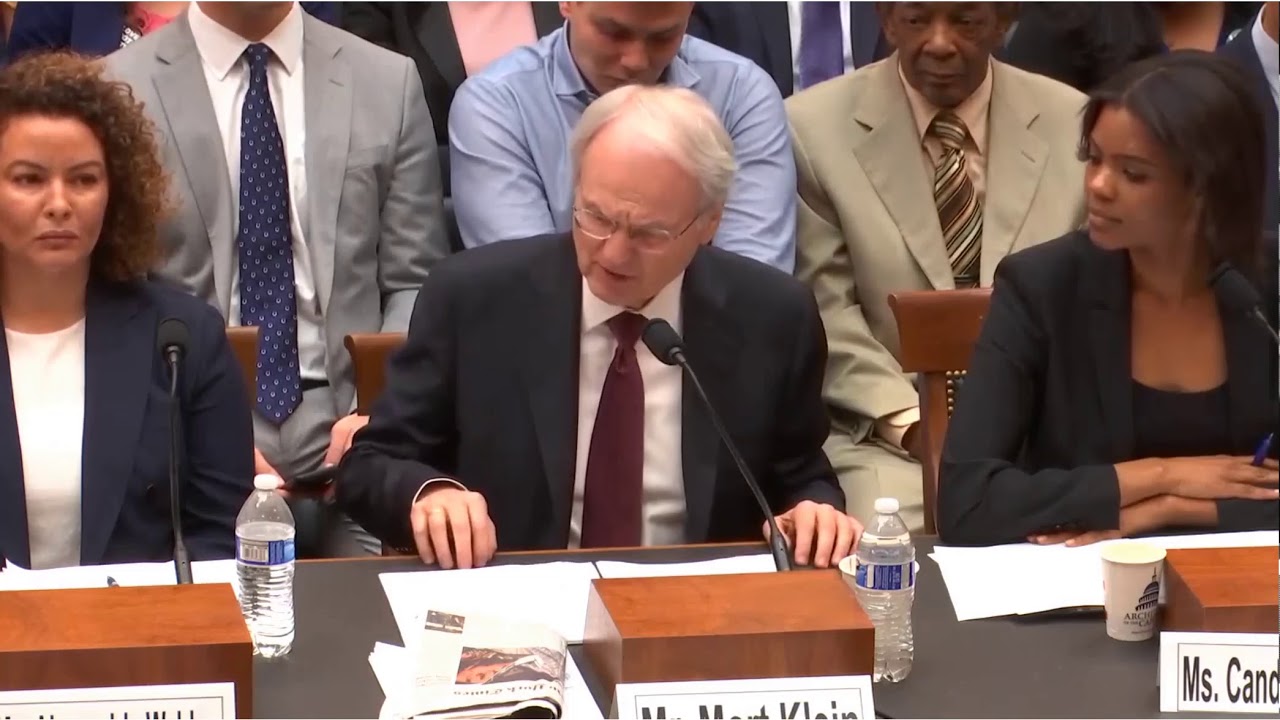 Congressman Biggs showed that he is a true mensch with great integrity dedicated to fairness and civility, when ZOA President Morton Klein testified about Islamist antisemitism and hate crimes at a hearing of the U.S. Judiciary Committee this past April.  Part-way through Mr. Klein’s opening remarks, Mr. Klein began speaking about the House leadership’s failure to penalize and condemn Rep. Ilhan Omar (D-MN) and Rashida Tlaib (D-MI) for their vicious antisemitic accusations, including Omar’s false accusations that Israel is “evil” and “hypnotizes the world,” and Omar’s false accusations that Jews buy Congress with “the Benjamins” and their support of BDS and their insane comparison of Israel to Nazis. House Judiciary Chairman Jerry Nadler (D-NY) immediately banged down his gavel and refused to allow Mr. Klein to complete his opening testimony, even though Mr. Klein’s allotted time had not yet expired.  Shortly afterwards, Congressman Biggs ceded all of his own time to Morton Klein, so that Mr. Klein could finish his remarks about the need to remove virulently antisemitic, Israelophobic Congresspersons Omar and Tlaib from their committees.

These exchanges at the April 9, 2019 Judiciary Committee hearing, including Congressman Biggs’ honorable action, can be viewed on video.  See “Watch: Nadler Gives Jewish Activist 30 Seconds at Hate Crime Hearing, Then Cuts Him Off for Calling Out Omar,” by Caleb Howe, Media-ite, April 9, 2019.

Morton Klein stated:  “Prior to my Congressional testimony in April, I had never had the pleasure of meeting Congressman Biggs.  I was very impressed that Congressman Biggs – who I did not yet know – forewent his own time to give me the opportunity to finish my introductory statement about Islamist antisemitism. I will long remember the Congressman Bigg’s graciousness and sense of decency and fairness.”

ZOA was also impressed with Congressman Biggs’ beautiful Op Ed on the anniversary of 9-11 this past week, urging all Americans to honor the memories of the victims and heroes of 9-11, by uniting this great country, the United States of America.

We would love to hear from you! Please fill out this form and we will get in touch with you shortly.
Trending Z
News September 13, 2019
ZOA Condemns U.S. State Dept. & U.S. Amb. Nides For Siding with Antisemitic, Discriminatory Palestinian & Hamas Terrorists re: the Temple Mount, Violating Jews’ Religious Freedom
News September 13, 2019
ZOA’s Klein JPost Op-Ed: There is Nothing Extreme About Israel’s New Government
Uncategorized September 13, 2019
FLASH: ISRAEL-JORDAN PEACE TREATY (1994) GUARANTEES JEWS ACCESS TO THE TEMPLE MOUNT – LET MY PEOPLE PRAY
Uncategorized September 13, 2019
ZOA Analysis: Most American Rabbis Who Are Boycotting Some Israeli Ministers Are From Extremist Left Wing Groups (J Street; T’ruah; JVP)
Center for Law & Justice
We work to educate the American public and Congress about legal issues in order to advance the interests of Israel and the Jewish people.
We assist American victims of terrorism in vindicating their rights under the law, and seek to hold terrorists and sponsors of terrorism accountable for their actions.
We fight anti-Semitism and anti-Israel bias in the media and on college campuses.
We strive to enforce existing law and also to create new law in order to safeguard the rights of the Jewish people in the United States and Israel.
Our Mission
ZOA STATEMENT
The ZOA speaks out for Israel – in reports, newsletters, and other publications. In speeches in synagogues, churches, and community events, in high schools and colleges from coast to coast. In e-mail action alerts. In op-eds and letters to the editor. In radio and television appearances by ZOA leaders. Always on the front lines of pro-Israel activism, ZOA has made its mark.
Related Articles
OP-ED BY: ZOA Staff ZOA Condemns Kerry For Supporting Iran’s Outrageous Demands Despite Violations