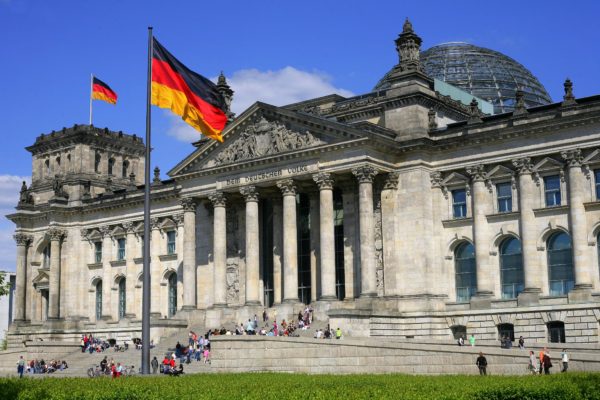 The Zionist Organization of America (ZOA) has praised the Bundestag, the German parliament, for passing a non-binding resolution to ban activity on German soil of the Iranian proxy Lebanese Shia terrorist group, Hezbollah. It further urges Berlin to abandon the distinction it currently maintains, along with other European Union (EU) governments, between the political and a military wings of Hezbollah. (Only Britain –– soon to leave the EU –– and the Netherlands among EU nations recognize the entirety of Hezbollah as a terrorist organization).

The parliamentary resolution was supported by the major parties that make up Germany’s ruling coalition as well as by a small opposition party, the Free Democratic Party (FDP), whose legislator, Benjamin Strasser, drafted the resolution, ensuring that it passed with a sizable majority. The three other parties represented in the Bundestag abstained. The resolution was not opposed by any party or individual legislator. Two opposition parties — the Greens and the far-right Alternative for Germany — proposed their own resolutions on Hezbollah, which both failed to pass.

In its preamble, the resolution quotes Germany’s domestic intelligence service estimating that Hezbollah “continues to plan and execute acts of terrorism against Israel or Israeli interests, also outside the Middle East.” The resolution also reiterates Berlin’s commitment to “a Jewish and democratic state of Israel in secure borders, and an independent, democratic and viable Palestinian state.”

The Israeli Ambassador to Germany, Jeremy Issacharoff, said, “We welcome the important and significant resolution adopted today by the Bundestag, which relates to Hezbollah for what it is: a terrorist organization, with no distinction between its military and ‘political’ wings … Hezbollah is indoctrinated, trained and financed by Iran and poses a threat not only to Israeli civilians, but also undermines Lebanese sovereignty and regional stability. As the resolution indicates, it poses a direct threat to German and Israeli security interests.”

The resolution calls on the government in Berlin to “decree an activity ban against Hezbollah in order not to tolerate any activity in Germany by representatives of the organization, which opposes the principle of international understanding.” It further urges Berlin to abandon the distinction it currently draws between the political and military wings of Hezbollah (Tobias Schwarz, ‘German parliament passes initiative to ban Hezbollah activity,’ i24News, December 19, 2019).

It is believed that about 1,000 Hezbollah supporters presently live in Germany, a number which is believed to have recently increased.

ZOA National President Morton A. Klein said, “The ZOA strongly applauds the Bundestag for passing this resolution calling for an end to the mischievous fiction that Hezbollah’s ‘political’ wing is any different in kind, aim or malevolence to its ‘military wing’ and calling on the German government to outlaw its activities on German soil.

“This absurd fiction has been used over the decades in the case of many terrorist organizations, from the IRA to the PLO, to dignify the immoral policy of officially and openly dealing with terrorists while pretending to strike a moral pose by outlawing the terrorist group’s ‘military wing.’ The terrible net result of this cynical policy has been to boost terrorists by implicitly accrediting the idea that they somehow represent a legitimate organization and cause.

“While we do not welcome the resolution’s irrelevant and wrong-headed reiteration of the ‘two state solution,’ we very much approve the Bundestag taking up the cudgels on Hezbollah and working strongly, by a strong majority, to put an end to Hezbollah’s activity in Germany.

“We also strongly applaud the fantastic efforts of the US Ambassador to Germany, Richard Grenell, who worked very hard with members of the German Government and the Bundestag to achieve passage of this resolution.

“The Bundestag resolution sets an important precedent, one that will hopefully be taken up by the German and other European governments, contributing to the move to end the fiction that it is acceptable to deal with the political representatives of bloodthirsty terrorists, who need to be ostracized, hunted down and eliminated from the international political landscape.”

We would love to hear from you! Please fill out this form and we will get in touch with you shortly.
Trending Z
News December 27, 2019
ZOA Condemns U.S. State Dept. & U.S. Amb. Nides For Siding with Antisemitic, Discriminatory Palestinian & Hamas Terrorists re: the Temple Mount, Violating Jews’ Religious Freedom
Uncategorized December 27, 2019
FLASH: ISRAEL-JORDAN PEACE TREATY (1994) GUARANTEES JEWS ACCESS TO THE TEMPLE MOUNT – LET MY PEOPLE PRAY
Uncategorized December 27, 2019
ZOA Analysis: Most American Rabbis Who Are Boycotting Some Israeli Ministers Are From Extremist Left Wing Groups (J Street; T’ruah; JVP)
Uncategorized December 27, 2019
Israel’s “Right of Return” Grandparent Clause is De-Judaizing the Jewish State – Eliminate It
Center for Law & Justice
We work to educate the American public and Congress about legal issues in order to advance the interests of Israel and the Jewish people.
We assist American victims of terrorism in vindicating their rights under the law, and seek to hold terrorists and sponsors of terrorism accountable for their actions.
We fight anti-Semitism and anti-Israel bias in the media and on college campuses.
We strive to enforce existing law and also to create new law in order to safeguard the rights of the Jewish people in the United States and Israel.
Our Mission
ZOA STATEMENT
The ZOA speaks out for Israel – in reports, newsletters, and other publications. In speeches in synagogues, churches, and community events, in high schools and colleges from coast to coast. In e-mail action alerts. In op-eds and letters to the editor. In radio and television appearances by ZOA leaders. Always on the front lines of pro-Israel activism, ZOA has made its mark.
Related Articles
OP-ED BY: ZOA Staff ZOA Condemns Kerry For Supporting Iran’s Outrageous Demands Despite Violations