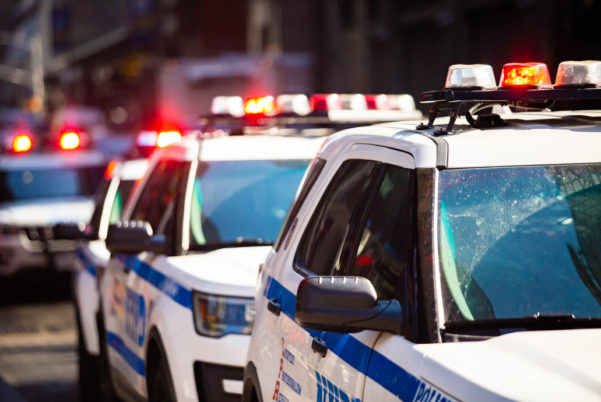 American Jews are being traumatized, terrorized, targeted, and even murdered. Even our children are being physically assaulted by brutal antisemites.

It’s long past time for public officials at all levels of government to throw the book – including federal domestic terrorism charges – at the violent perpetrators.

It’s long past time to investigate and take action against violent and violence-inciting hate groups, such as Farrakhan’s Nation of Islam, radical Muslim groups, white supremacists, the Black Hebrew Israelites group responsible for the New Jersey grocery store murders of innocent Jews and others, and other racist groups.

And it’s long past time to acknowledge that racist African American antisemites are perpetrating the majority of the violence against Jews in New York City, New Jersey, Monsey, and elsewhere. This does not impugn the vast majority of law-abiding African Americans. We can’t address the real problem when we hear comments such as New York City Mayor de Blasio’s claims that antisemitism is exclusively or “very much” a “right-wing movement.” Congresswoman Rashida Tlaib even falsely and absurdly blamed “white supremacy” for the Jersey City massacre of innocent Jews and others at a kosher grocery store – when it was well known that the perpetrators were African American members of an anti-white, antisemitic hate group. That sort of denial is downright dangerous, and comes from other less well-known quarters too.

(We are pleased that Rabbi Marvin Hier and Rabbi Cooper of the Simon Wiesenthal Center also demanded that African American leaders speak out about the fact that most of these attacks on Jews are committed by African Americans.)

It’s long past time for faith leaders from African American, Muslim, and other communities, to speak out and demand that members of their congregations and communities stop the anti-Jewish violence and hatred.

And it’s long past time to condemn and take action against those who obscenely blame the fact that Jews moved to or live in their communities for the attacks on Jews. “The Jews are at fault for living here” was the despicable attitude expressed by some members of the African American community after the December 10 Jersey City kosher grocery store massacre. Even a public official, Jersey City School Board member Joan Terrell-Paige, defended the murderers and blamed the Jewish victims by posting that the murderers were sending a message to the “I want to buy your house brutes of the Jewish community.” ZOA urges that Ms. Terrell-Paige be immediately removed from the Jersey City School Board.

Can you imagine the uproar if someone condemned and murdered African Americans, or any other minority group, for the “crime” of moving to and living in their community? There must be similar outrage against this sort of “blame the victim” viciousness hurled at Jews.

And it’s long past time to censure and remove from committees the anti-Jewish hate-mongers in Congress, including Alexandria Ocasio-Cortez (D-NY), Rashida Tlaib (D-MI), and Ilhan Omar (D-MN), who “justify” and incite violence against Jews and promote ugly lies about Jews. AOC even said that Palestinians-Arabs “have no choice but to riot” against Jews! These haters may be setting the stage for black-American attacks on Jews.

And it’s long past time for social media giants to get serious about removing the ugly antisemitism and incitement from their platforms.

And it’s long past time for everyone else to take the utmost action to stop these assaults. We need all hands on deck. We urge President Trump to set up a task force to study ways to combat this increasing violent antisemitism.

It is heartbreaking and horrifying that every day of Hanukkah this year was marked by another hateful physical assault – including a hateful attack on little Jewish children.

On Monday, December 23 in Williamsburg, Brooklyn, two heartless, violent perpetrators attacked two little Jewish boys, ages 6 and 7, from behind, in the lobby of the boys’ apartment building. The 6-year-old victim was struck in the stomach, and the boys suffered minor injuries.

The same day, in broad daylight on East 41st Street near Third Avenue in Manhattan, Steven Jorge, 28, of Miami punched and kicked a 65-year-old Jewish man wearing a yarmulke, while Jorge screamed “F–k you, Jew bastard.”

On Wednesday, a 40-year-old Jewish man was punched in the chin by a stranger.

On Thursday, African American alleged assailant Ayana Logan used her handbag as a sledgehammer to beat the head of a young Orthodox Jewish mother, who was with her 3-year-old child, while the assailant screamed “You f–-king Jew, your end is coming!” Yet, the judge released assailant Logan upon her mere promise to attend bi-monthly mental health appointments.

On Friday morning, African American alleged assailant Tiffany Harris punched in the face and cursed at three young Orthodox women in Crown Heights, Brooklyn. Harris admitted to the police officers who arrested her: “Yes, I slapped them. I cursed them out. I said ‘F-U, Jews.’” Harris has a record of failing to show up for court appearances. Yet, the Brooklyn Criminal Court released Harris without bail, citing New York’s not-yet-effective “Bail Elimination Act.” Thus, Harris is back in the same community where she just assaulted innocent Jewish women, like virtually all the attackers of Jews in New York City last week.

**Although New York’s Bail Elimination Act does not go into effect until January 1, 2020, the law has already become another impediment to stopping assaults on innocent Jews. Staten Island, NY District Attorney Michael McMahon previously warned that New York’s bail reform law “will undoubtedly hinder our ability to hold criminals accountable and to prosecute even the most heinous crimes.” Similarly, Queens, NY District Attorney John Ryan cautioned: “New Yorkers should prepare for literally thousands of criminals back in their communities.”

Yet, New York City Mayor Bill de Blasio defended the Bail Elimination Act, on Fox on Sunday. De Blasio claimed that the law is needed to stop “mass incarceration,” and that it is unfair to hold perpetrators in jail because they can’t afford bail. New York’s leaders must take steps to revise this new law that allows violent Jew-haters to roam the streets. And if New York doesn’t act, the federal government needs to step in.

And of course, most horrifically, on Saturday night (December 28), a tall, burly African American, Grafton Thomas, drove to and entered Rabbi Chaim Rotenberg’s home in Monsey, New York during a Hanukkah celebration, drew out a machete and brutally stabbed five innocent Jews, including a 71-year-old and the Rabbi’s son. Thomas gave one victim a skull fracture, stabbed one in the chest, and stabbed another one of the Jewish victims six times. The Rabbi’s guests threw chairs and tables at Thomas to stop him, and managed to stop Thomas from entering the synagogue next door to stab even more Jews. Thomas fled but the police found him after he drove to Harlem. Thomas was covered in the blood of his Jewish victims.

We need to keep these violent antisemitic perpetrators off the streets.

In September, Americans Against Antisemitism founder Dov Hikind and I spoke at a protest with hundreds of people in front of City Hall demanding that Mayor de Blasio provide real action to protect the Jewish community, and that African American leaders must speak out. Our demands were not heeded then. It’s long past time to start heeding them now.

We would love to hear from you! Please fill out this form and we will get in touch with you shortly.
Trending Z
Uncategorized December 30, 2019
ZOA Analysis: Most American Rabbis Who Are Boycotting Some Israeli Ministers Are From Extremist Left Wing Groups (J Street; T’ruah; JVP)
Uncategorized December 30, 2019
ZOA: Israel’s Reasonable Judicial Reform Proposals Are Good for Democracy, the Rule of Law and the Economy
News December 30, 2019
ZOA is Disappointed, Offended and Frightened by 211 U.S. House Votes Supporting Jew-Hating, Israel-Hating Rep. Ilhan Omar
Uncategorized December 30, 2019
Israel’s “Right of Return” Grandparent Clause is De-Judaizing the Jewish State – Eliminate It
Center for Law & Justice
We work to educate the American public and Congress about legal issues in order to advance the interests of Israel and the Jewish people.
We assist American victims of terrorism in vindicating their rights under the law, and seek to hold terrorists and sponsors of terrorism accountable for their actions.
We fight anti-Semitism and anti-Israel bias in the media and on college campuses.
We strive to enforce existing law and also to create new law in order to safeguard the rights of the Jewish people in the United States and Israel.
Our Mission
ZOA STATEMENT
The ZOA speaks out for Israel – in reports, newsletters, and other publications. In speeches in synagogues, churches, and community events, in high schools and colleges from coast to coast. In e-mail action alerts. In op-eds and letters to the editor. In radio and television appearances by ZOA leaders. Always on the front lines of pro-Israel activism, ZOA has made its mark.
Related Articles
OP-ED ZOA Mourns Passing of Ariel Founder & Visionary, Ron Nachman