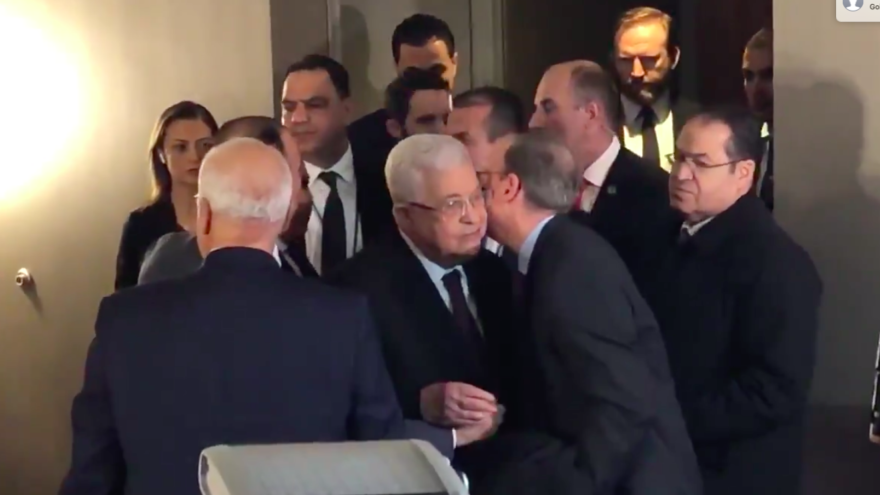 This is the same Mahmoud Abbas who financed and helped plan the brutal torture, beatings, castration and massacre of Israel’s athletes at the 1972 Munich Olympics, and adamantly insists, to this day, on continuing to pay Arab terrorists over $350 million per year to slaughter Jews and Americans.  This is the same Mahmoud Abbas who repeatedly re-broadcasts his calls to spill blood to stop “Jews filthy feet” from “defiling” Jerusalem – and has incited waves of terror that resulted in the murder and maiming of thousands of Jews.

If you find J Street’s leader’s showing great respect and love for this Jew-hating Israelophobe as offensive as we do, please make sure to vote today for the ZOA Coalition (Slate #11) of 27 of the strongest pro-Israel organizations in the ongoing World Zionist Congress Elections today! (See VoteZOA.org )

Your vote is particularly important because J Street’s leader is running on the “progressive” slate in the World Zionist Congress election.  J Street openly states that it is running to “divert” the funds of Israel’s national institutions “away from” 750,000 Jews living in Jerusalem and Judea-Samaria.

Ever since J Street’s inception 12 years ago, the positions, advocacy, statements and activities of J Street and its leader Jeremy Ben-Ami have been deeply troubling, even frightening.

Here are some additional resources describing positions, advocacy, statements, and activities of J Street, its leader Jeremy Ben-Ami, and other groups that are running together with J Street on the “progressive” “Hatikvah” slate in the World Zionist Congress election:

Please. We urge you to help us fight for and defend the rights of the only Jewish State of Israel and the Jewish people, by voting for the ZOA Coalition (Slate #11) in the World Zionist Congress elections ongoing now.

Please go to VoteZOA.org and then vote for our ZOA Coalition – Slate #11!  Thank you for your support. Together we will win!

We would love to hear from you! Please fill out this form and we will get in touch with you shortly.
Trending Z
News February 14, 2020
At ZOA Gala Secy Pompeo Gave the Greatest, Most Pro-Israel Speech Ever Delivered by a Public Official
News February 14, 2020
Dershowitz in Arutz 7: NYC’s Temple Emanu-El Silences a Pro-Israel Voice & Promotes an Anti-Israel Voice
Uncategorized February 14, 2020
Jewish Press: Has Deborah Lipstadt Undercut Both Herself and Future Antisemitism Envoys?
News February 14, 2020
NEW YORK POST: Democratic Leaders’ Shocking Silence Over Attacks on Israel by Fellow Dems
Our Mission
ZOA STATEMENT
The ZOA speaks out for Israel – in reports, newsletters, and other publications. In speeches in synagogues, churches, and community events, in high schools and colleges from coast to coast. In e-mail action alerts. In op-eds and letters to the editor. In radio and television appearances by ZOA leaders. Always on the front lines of pro-Israel activism, ZOA has made its mark.
Center for Law & Justice
We work to educate the American public and Congress about legal issues in order to advance the interests of Israel and the Jewish people.
We assist American victims of terrorism in vindicating their rights under the law, and seek to hold terrorists and sponsors of terrorism accountable for their actions.
We fight anti-Semitism and anti-Israel bias in the media and on college campuses.
We strive to enforce existing law and also to create new law in order to safeguard the rights of the Jewish people in the United States and Israel.
Related Articles
OP-ED ZOA: Groups Boycotting Azerbaijan-Hanukkah Party Hurt Both U.S-Israel & Muslim Azerbaijan Relations

Zionist Organization of America (ZOA) President Morton A. Klein released the following statement: Eleven Jewish organizations have hurt and embarrassed the President-elect and Azerbaijan – a friendly Muslim country with an excellent relationship with Israel and Azerbaijan’s local Jewish population who this week hosted Israeli PM Netanyahu– when those 11 organizations boycotted the Hanukkah party […]