11) The election ends on Wednesday, March 11 – in only 3 days! Time is running out for your to cast your vote for ZOA Coalition – Slate #11 – the slate that puts the safety of the Jewish people first.

10) Your vote will strengthen the slate that leads the battle to defend Israel, sovereignty, and the Jewish people.

9) You want to vote for the slate that takes action! At the most recent World Zionist Congress, every pro-Israel pro-Jewish resolution was initiated by the ZOA Coalition – Slate #11.

8) You want to combat BDS. The ZOA Coalition initiated and obtained passage of the World Zionist Congress’s strong anti-BDS resolution, “buy-Israeli” program, and continues to lead the battles against BDS.

5) Your vote for the ZOA Coalition is a vote for positive Zionist and Jewish education. And it’s a vote to end WZC programs that criticize Israeli security measures (checkpoints) and religious Jews.

4) You are outraged that the left blocked ZOA Coalition’s proposal for an emergency Aliyah program for French Jewry last year. You want to vote for the slate that fights for the safety of Jews around the world who are endangered by rising global antisemitism.

3) You are alarmed that the World Zionist Congress almost passed a left-wing resolution labeling Israeli society as full of “institutional racism” last year. (The resolution was only defeated by one vote!) Your vote for the ZOA Coalition will help make sure that such terrible resolutions will not pass.

1) The election is almost over! You have until Wednesday March 11th to cast your vote. The time to vote for the ZOA Coalition – the slate that puts the safety of the entire Jewish people first – is running out.

STILL NOT SURE ABOUT

WHY IT’S IMPORTANT TO VOTE?

Get the scoop from ZOA Chairman Mark Levenson, as he discusses the World Zionist Congress elections with Zev Brenner, the host of Talkline radio show, and why it’s important to vote for the ZOA Coalition – Slate #11.

Click HERE to listen to Mark Levenson on the radio. 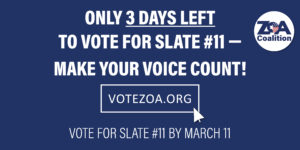 We would love to hear from you! Please fill out this form and we will get in touch with you shortly.
Trending Z
News March 9, 2020
ZOA Condemns U.S. State Dept. & U.S. Amb. Nides For Siding with Antisemitic, Discriminatory Palestinian & Hamas Terrorists re: the Temple Mount, Violating Jews’ Religious Freedom
Uncategorized March 9, 2020
FLASH: ISRAEL-JORDAN PEACE TREATY (1994) GUARANTEES JEWS ACCESS TO THE TEMPLE MOUNT – LET MY PEOPLE PRAY
Uncategorized March 9, 2020
ZOA Analysis: Most American Rabbis Who Are Boycotting Some Israeli Ministers Are From Extremist Left Wing Groups (J Street; T’ruah; JVP)
Uncategorized March 9, 2020
Israel’s “Right of Return” Grandparent Clause is De-Judaizing the Jewish State – Eliminate It
Center for Law & Justice
We work to educate the American public and Congress about legal issues in order to advance the interests of Israel and the Jewish people.
We assist American victims of terrorism in vindicating their rights under the law, and seek to hold terrorists and sponsors of terrorism accountable for their actions.
We fight anti-Semitism and anti-Israel bias in the media and on college campuses.
We strive to enforce existing law and also to create new law in order to safeguard the rights of the Jewish people in the United States and Israel.
Our Mission
ZOA STATEMENT
The ZOA speaks out for Israel – in reports, newsletters, and other publications. In speeches in synagogues, churches, and community events, in high schools and colleges from coast to coast. In e-mail action alerts. In op-eds and letters to the editor. In radio and television appearances by ZOA leaders. Always on the front lines of pro-Israel activism, ZOA has made its mark.
Connect with us
Sign up for our Newsletter