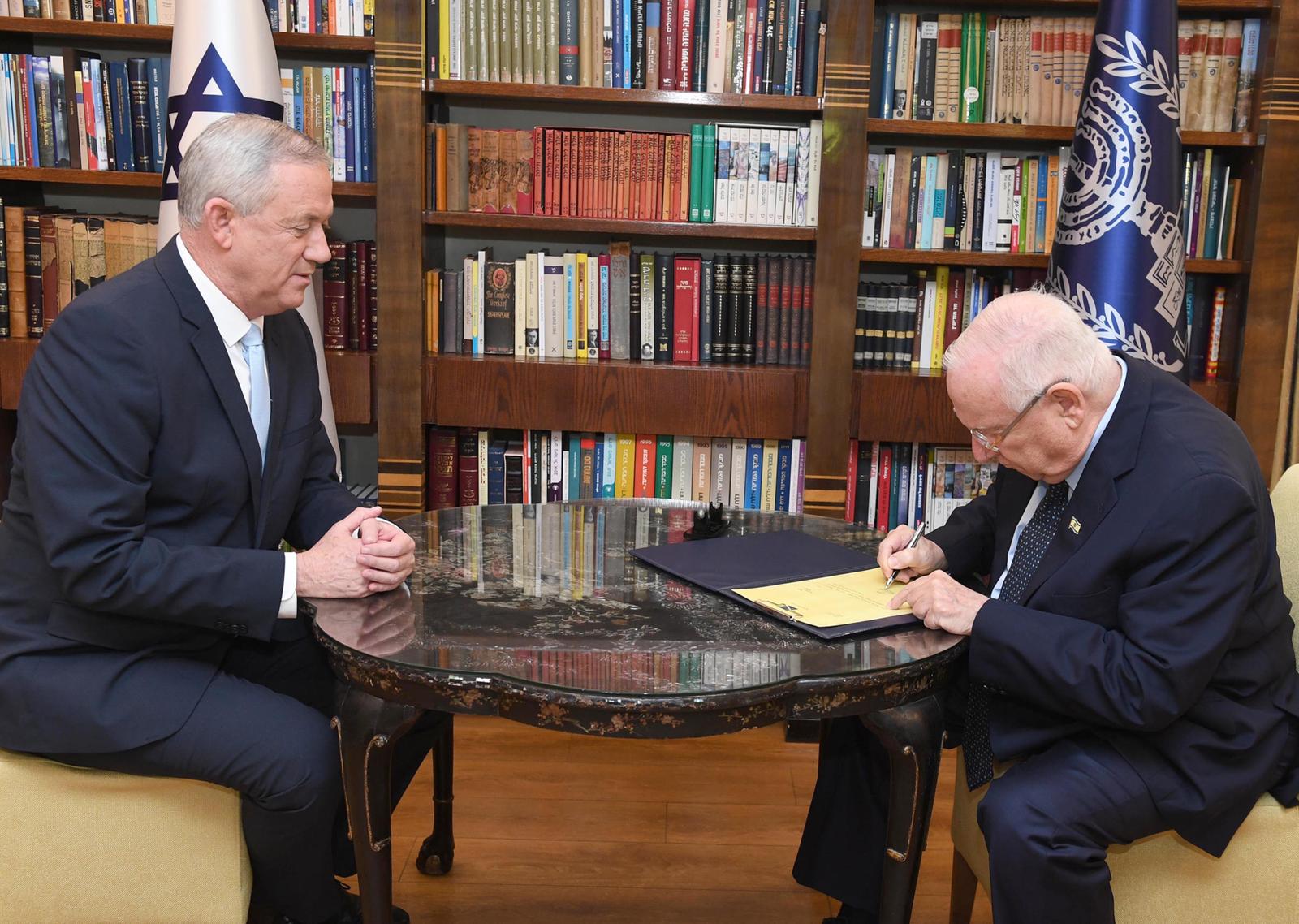 It’s shameful that an Arab Joint List-backed government could be foisted on the Jewish people.  The Knesset should be assuring that this can never happen – by enacting stronger laws to remove its traitorous members who oppose the Jewish state, and praise the murderers of innocent Jews.

Ameinu (which teamed up with The anti-Israel J Street in the recent WZC elections) absurdly claimed (based on an out-of-context line from a draft 1934 document) that a Joint Arab List-backed government is the realization of revisionist (“right wing”) Zionist Ze’ev Jabotinsky’s “dream.”

Jabotinsky clearly viewed the Mandate’s guarantee of the Jewish homeland as requiring a Jewish majority government.

For instance, in 1936, Jabotinsky vehemently opposed British Colonial Office proposals to create a “Palestine Legislative Council” comprised of 50% Arabs, British government officials, and a minority of Jews.  Jabotinsky campaigned against the proposal in numerous speeches, articles and discussions with British Parliament members and commissions.  He explained that the Legislative Council proposal was “in contradiction to the mandate’s obligation or any interpretation of it.  The mandate conferred rights upon the Jewish people as a whole.”

Jabotinsky further declared that because the mandate conferred rights to “the Jew throughout the world,” the Jewish people must be considered to be the majority – rather than the Arab “population on the spot.”   (Quoted in “Lone Wolf: A Biography of Ze’ev Jabotinsky,” by Shmuel Katz, pp. 1519.  See also id., at pp. 1219-1220 & 1475-1476.)

Jabotinsky also insisted on establishing an overwhelming Jewish majority in the Jewish homeland – and on breaking the Arabs will to continue fighting against the Jewish people.  Jabotinsky would only countenance a moderate Arab party that discontinued its anti-Jewish violence and hatred.  The Joint Arab List does not qualify as such, by any stretch of the imagination.

For instance, shortly after the Nazis’ brutal Krystalnacht (Nov. 9-10, 1938), Jabotinsky proposed a plan to immediately evacuate one million Jews from Europe to Israel, and stated with respect to the argument that Arabs would intensify their anti-Jewish pogroms and violence:

“[I]f that [Jewish] majority, almost ‘overnight’ becomes a fait accompli, the very [Arab] will to fight will be broken.  What will then happen will be the formation of a moderate Arab party ready to come to terms.” (New Zionist Organization, Palestine Emergency Plan, Nov. 22, 1938, quoted in “Lone Wolf, pp. 1657-1660.)

Unfortunately, Britain slammed shut Jewish immigration to Israel; what could have been an immediate Jewish majority in 1938 instead went up in smoke in the Nazis’ crematoria; the Arabs waged war and terrorism against the remnant of the Jewish people; and no moderate Arab party ready to come to terms formed in Israel.  Instead, the Joint Arab List’s members praise murderers of Jewish children; call for struggling for “Palestine, my country” with fire and guns; and have used their Knesset positions to spy for Hezbollah and smuggle information to assist PIJ murderers.

Jabotinsky’s interest in furthering a Jewish majority and Jewish rights is also reflected in the same 1934 draft that Ameinu quoted from, out-of-context.  Prior to discussing minority rights, the draft document began with the proviso:  “Provided nothing be done to hinder any foreign Jew from repatriating to Palestine, and, by doing so, automatically becoming a Palestinian citizen.”  (“Palestine” referred to the Jewish homeland.)

In other words, the 1934 draft document insisted that an Arab minority must first accept the Jewish right of return.  However, the Joint Arab List openly opposes and seeks to eliminate this fundamental Jewish right.  Jabotinsky’s “dream” surely would not include a government backed by Arab parties that are so diametrically opposed to the Jewish people’s rights.

The late, great Jewish historian Benzion Netanyahu (Jabotinsky’s successor, and the father of Israel’s Prime Minister), in a speech describing how Jabotinsky would react to modern events, noted that Jabotinsky

“was firmly committed to the right of the Jews to rule their homeland within its historical boundaries… He would never agree to an inferior status for Jews in any part of their ancestral land, and he would certainly hold that not only would such a policy not contribute to peace, but would incite feelings of disdain for Jews in the minds of Arabs, and cause further tensions between the two groups and prevent normalization of the relations between them. No doubt Jabotinsky would see any solution to the problem to be based upon totally equal rights applied to every resident of the land by a strong government, which would be in the hands of the Jewish people.” (“Jabotinsky as Statesman and Leader of His Nation: How would he react to the problems of our time?” by Prof. Benzion Netanyahu lecture at Tel Aviv Univ., Mar. 4, 2001.)

It’s time for the Knesset to enact strong laws to remove any Knesset members who support terrorism against Jews, praise terrorist groups like Hamas, who oppose the right of Jews anywhere to automatically become citizens of Israel or who oppose Israel as a Jewish State.

It’s time for Gantz and Avigdor Lieberman to apologize to the Israeli people for repeatedly lying during the campaign that they would never form a government with the traitorous, extremist Israeli Arab parties.

We would love to hear from you! Please fill out this form and we will get in touch with you shortly.
Trending Z
Uncategorized March 18, 2020
FLASH: ISRAEL-JORDAN PEACE TREATY (1994) GUARANTEES JEWS ACCESS TO THE TEMPLE MOUNT – LET MY PEOPLE PRAY
Uncategorized March 18, 2020
ZOA Analysis: Most American Rabbis Who Are Boycotting Some Israeli Ministers Are From Extremist Left Wing Groups (J Street; T’ruah; JVP)
Uncategorized March 18, 2020
Israel’s “Right of Return” Grandparent Clause is De-Judaizing the Jewish State – Eliminate It
Uncategorized March 18, 2020
Exclusive: ZOA Accuses Ilhan Omar of Hating the U.S. ‘as Much as Israel,’ Lauds Kevin McCarthy for ‘Throwing Her Off the HFAC’
Center for Law & Justice
We work to educate the American public and Congress about legal issues in order to advance the interests of Israel and the Jewish people.
We assist American victims of terrorism in vindicating their rights under the law, and seek to hold terrorists and sponsors of terrorism accountable for their actions.
We fight anti-Semitism and anti-Israel bias in the media and on college campuses.
We strive to enforce existing law and also to create new law in order to safeguard the rights of the Jewish people in the United States and Israel.
Our Mission
ZOA STATEMENT
The ZOA speaks out for Israel – in reports, newsletters, and other publications. In speeches in synagogues, churches, and community events, in high schools and colleges from coast to coast. In e-mail action alerts. In op-eds and letters to the editor. In radio and television appearances by ZOA leaders. Always on the front lines of pro-Israel activism, ZOA has made its mark.
Related Articles
OP-ED ZOA Mourns Passing of Ariel Founder & Visionary, Ron Nachman