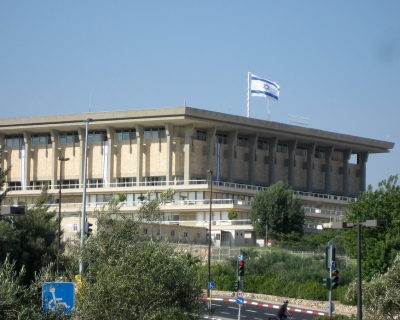 It is appalling and disgraceful that the Blue & White party appointed the Jew-hating, Israel-hating antisemitic-blood-libel-spouting Joint Arab List and Israeli Arab Communist MK Aida Touma-Sliman to head the Knesset Labor, Welfare, and Health Committee.  The Knesset Labor, Welfare and Health Committee is responsible for rehabilitating wounded Israel Defense Forces veterans and victims of terrorism; and for payments to soldiers and the families, among other key security-related and humanitarian issues.

“Placing a Jew-hating Israel-hater whose statements and positions incite and promote terror against Israelis, at the head of the Knesset Labor, Welfare and Health Committee, displays utter disregard and contempt for every Israeli victim of Arab terrorism, and for the health and welfare of the Israeli public.”

Touma-Sliman is particularly unfit to chair this vital committee:  She recently used the coronavirus to incite against Israelis; opposes Arab states’ normal relations with Israel; opposes Israeli security measures; opposes the Israeli Defense Forces (IDF); falsely accuses Israel of “apartheid” and “ethnic cleansing”; and has made it clear that she represents the “Palestinian” goal of fighting the “occupation” – not the interests of Israel.

For instance, on March 13, MK Touma-Sliman tweeted the following blood libel against the IDF, along with a video that actually showed Palestinian Authority forces disinfecting a checkpoint:

Defense Minister Naftali Bennett responded that the video was from the Palestinian side of the checkpoint, and that it was the Palestinian Authority who was disinfecting the area, and told Touma-Sliman: “You’re a liar, anti-Semitic and contemptible.   It’s unbelievable that Bogie [Ya’alon], Yvette [Avigdor Lieberman, [Benny] Gantz, Gabi [Ashkenazi] and [Yair] Lapid are ready to form a government with your finger [on it].”  Touma-Sliman finally back-tracked, but only after the damage caused by her libel was already done.

And in February 2020, Touma-Sliman called Israeli Minister for Military Affairs Naftali Bennett “the minister of death and brutality,” and condemned Israel for holding the body of a PIJ terrorist leader who was killed while attempting to plant a bomb at the Gaza fence, to exchange for Israelis held in Gaza. Touma-Sliman also snidely said that Israelis “steal a body, abuse it with a bulldozer, and still argue that the army is the most moral in the world.”

Someone who is so contemptuous of Israel’s moral army and efforts to recover Israelis and Israeli bodies held by Hamas and PIJ cannot possibly properly or fairly assist wounded IDF soldiers and Jewish terrorism victims. Nor she be given any position of power in the Jewish State.

Touma-Sliman also rallied for Israeli draft-dodgers and falsely accused Israel of aggression against Syria, outside an Israeli recruitment station.  Touma-Sliman also works closely with Palestinian Authority representatives at the UN to harm and defame Israel.  She bashed Israel at a “50 Years of Occupation” United Nations conference, including falsely accusing Israel of “oppression of an entire people,” and “apartheid,” and treasonously urging U.N. members to “exert significant pressure on Israel.”  See more here.

In September 2019, MK Touma-Sliman stated that she was running to thwart Israeli security measures such as exercising sovereignty over the Jordan Valley, “settlements” and the Golan Heights; to strengthen and represent the Palestinians’ fight against the “occupation”; and to oppose Arab countries’ normalization of ties with Israel.

ZOA President Morton Klein explained: “Placing a Jew-hating Israel-hater whose statements and positions incite and promote terror against Israelis, at the head of the Knesset Labor, Welfare and Health Committee, displays utter disregard and contempt for every Israeli victim of Arab terrorism, and for the health and welfare of the Israeli public.  The mothers and other family members of Jewish victims of Arab terror are shocked, horrified and deeply pained by Blue & White’s betrayal of them – after promising to not form a government with the Arab Joint List.  Touma-Sliman should not be permitted to even sit in the Knesset, much less lead such a vital Knesset committee.”

It is also horrifying that Ahmad Tibi – senior adviser to murderer Yasser Arafat while the Arafat regime perpetrated enormous violence against innocent Jews – will head the Knesset committee on violence in the Arab sector; that the far left Meretz party will head the Knesset education committee; and that the Arab Joint List obtained an extra seat on the vital Knesset Finance Committee.

Tibi falsely accuses Israelis of every crime in the book; proposed legislation to call Israel’s creation a “catastrophe” (Naqba); attended a conference in Qatar as a representative of “Palestine” while serving as an Israeli MK; objected to the naming of a space center after an Israeli astronaut who tragically died when the Columbia space shuttle exploded; opposed Israel’s right to choose her own capital; and calls Israel’s army the “Israeli Occupation Forces” – to name a few. See more here.

We urge all supporters of Israel to speak out against these outrageous appointments that can only harm the Jewish State of Israel.

We would love to hear from you! Please fill out this form and we will get in touch with you shortly.
Trending Z
Uncategorized March 26, 2020
FLASH: ISRAEL-JORDAN PEACE TREATY (1994) GUARANTEES JEWS ACCESS TO THE TEMPLE MOUNT – LET MY PEOPLE PRAY
Uncategorized March 26, 2020
ZOA Analysis: Most American Rabbis Who Are Boycotting Some Israeli Ministers Are From Extremist Left Wing Groups (J Street; T’ruah; JVP)
Uncategorized March 26, 2020
Israel’s “Right of Return” Grandparent Clause is De-Judaizing the Jewish State – Eliminate It
Uncategorized March 26, 2020
Exclusive: ZOA Accuses Ilhan Omar of Hating the U.S. ‘as Much as Israel,’ Lauds Kevin McCarthy for ‘Throwing Her Off the HFAC’
Center for Law & Justice
We work to educate the American public and Congress about legal issues in order to advance the interests of Israel and the Jewish people.
We assist American victims of terrorism in vindicating their rights under the law, and seek to hold terrorists and sponsors of terrorism accountable for their actions.
We fight anti-Semitism and anti-Israel bias in the media and on college campuses.
We strive to enforce existing law and also to create new law in order to safeguard the rights of the Jewish people in the United States and Israel.
Our Mission
ZOA STATEMENT
The ZOA speaks out for Israel – in reports, newsletters, and other publications. In speeches in synagogues, churches, and community events, in high schools and colleges from coast to coast. In e-mail action alerts. In op-eds and letters to the editor. In radio and television appearances by ZOA leaders. Always on the front lines of pro-Israel activism, ZOA has made its mark.
Related Articles
OP-ED ZOA Praises Trump Executive Order on Immigration