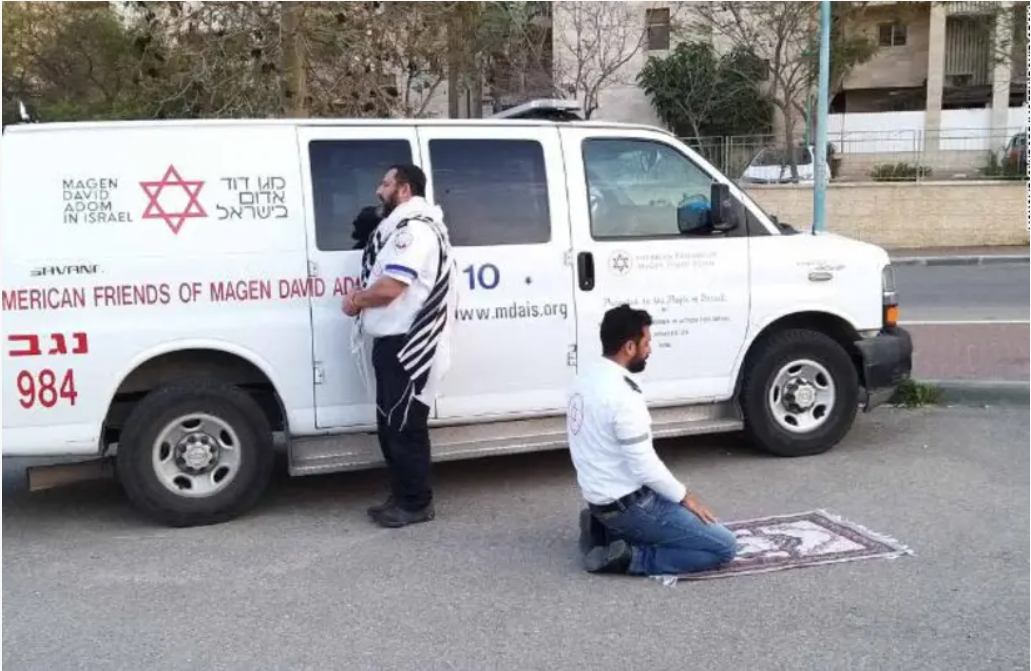 In Israel, the coronavirus has resulted in approximately 13,000 confirmed cases and over 140 Israelis dying, and has locked down the entire country.  Yet, Israel has generously been sending enormous amounts of medical and other humanitarian supplies to their sworn enemies the terrorist dictatorship Palestinian Authority (PA) and Gaza (including huge quantities of testing kits, PPE and sanitizer); training PA and Gazan Arab medical personnel; allowing PA workers to remain in Israel to avoid the risks of travel; and cooperating in every way possible to prevent the spread of the coronavirus in the PA and Gaza.  During a typical recent week (April 4), Israel transferred to Gaza 1,779 truckloads of goods, 81 tanks of fuel, 464 tons of medical supplies, 333 tons of agricultural products, 11,376 tons of food, 26,448 tons of building supplies, and 14,055 of miscellaneous goods.

Even the Arab press such as Al Arabiya and the UN Office for the Coordination of Humanitarian Affairs (OCHA) have praised Israel’s cooperative efforts.

Israel’s extraordinary kindness and generosity has been responded to by top PA/PLO officials and Hamas spouting the most vicious antisemitic libels imaginable, to incite hatred and violence against the Jewish people and the State. ZOA urges bi-partisan government officials and non-governmental organizations throughout the U.S. and the world to join ZOA in strongly condemning these vicious antisemitic libels.  Here are a few examples of this horrendous evil defamation:

We would love to hear from you! Please fill out this form and we will get in touch with you shortly.
Trending Z
Uncategorized April 17, 2020
FLASH: ISRAEL-JORDAN PEACE TREATY (1994) GUARANTEES JEWS ACCESS TO THE TEMPLE MOUNT – LET MY PEOPLE PRAY
Uncategorized April 17, 2020
ZOA Analysis: Most American Rabbis Who Are Boycotting Some Israeli Ministers Are From Extremist Left Wing Groups (J Street; T’ruah; JVP)
Uncategorized April 17, 2020
Israel’s “Right of Return” Grandparent Clause is De-Judaizing the Jewish State – Eliminate It
Uncategorized April 17, 2020
Exclusive: ZOA Accuses Ilhan Omar of Hating the U.S. ‘as Much as Israel,’ Lauds Kevin McCarthy for ‘Throwing Her Off the HFAC’
Center for Law & Justice
We work to educate the American public and Congress about legal issues in order to advance the interests of Israel and the Jewish people.
We assist American victims of terrorism in vindicating their rights under the law, and seek to hold terrorists and sponsors of terrorism accountable for their actions.
We fight anti-Semitism and anti-Israel bias in the media and on college campuses.
We strive to enforce existing law and also to create new law in order to safeguard the rights of the Jewish people in the United States and Israel.
Our Mission
ZOA STATEMENT
The ZOA speaks out for Israel – in reports, newsletters, and other publications. In speeches in synagogues, churches, and community events, in high schools and colleges from coast to coast. In e-mail action alerts. In op-eds and letters to the editor. In radio and television appearances by ZOA leaders. Always on the front lines of pro-Israel activism, ZOA has made its mark.
Related Articles
OP-ED BY: ZOA Staff ZOA Criticizes Pres. Obama For Praising Abbas’ “Renoucing Violence” –– Kerry For Calling Israel Demand of Recognition As “Jewish State” A Mistake