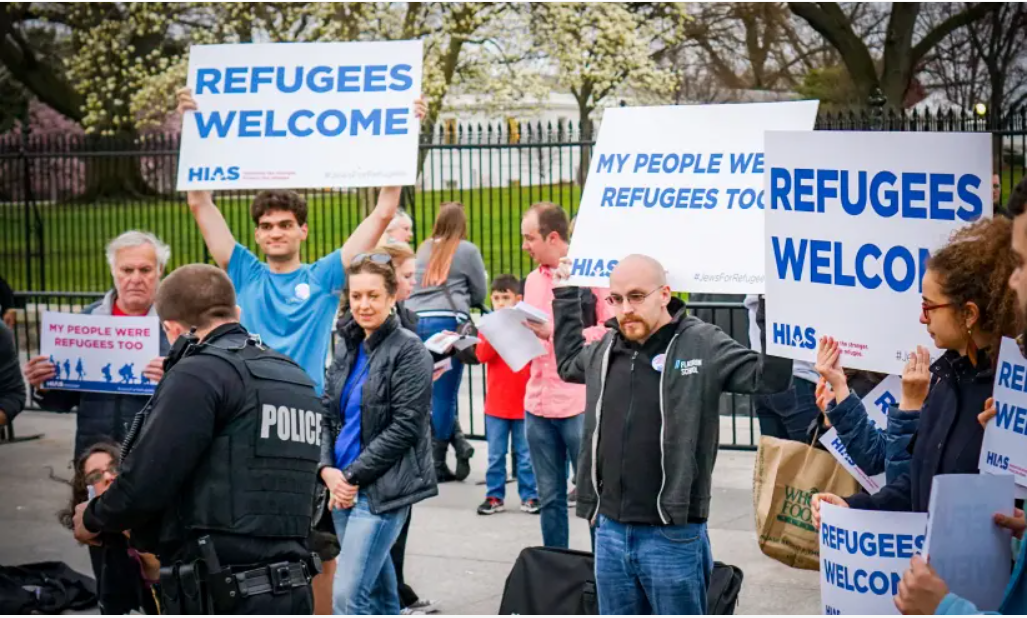 The campaign by ZOA and other pro-Israel organizations has resulted in the Conference of Presidents of Major American Jewish Organizations (the “COP”) agreeing to delay making HIAS Chair Dianne Lob the chair of the COP for almost a year.  The COP’s concession is minimal.  Indeed, false and absurd statements just made by HIAS’s president are a reminder of why HIAS Chair Dianne Lob should also not become COP Chair next year.  We continue to oppose Ms. Lob’s election.

Jewish Insider reported today that HIAS’s president Hetfield stated that “as a matter of policy, HIAS won’t partner with organizations that promote the BDS movement.”

In fact, disgracefully, HIAS proudly announced that its Clearwater, Florida program “works closely with the Council on American Islamic Relations” (CAIR). The Israel-bashing CAIR is a major promoter of BDS, as well as an unindicted co-conspirator in the Holy Land Foundation trial, for funneling money to Hamas.  It is deeply troubling (to say the least) that HIAS works with terrorist or terrorist-affiliated groups including CAIR and Islamic Relief USA.  IRUSA is the American branch of Islamic Relief Worldwide, which Israel and the UAE designated as a terrorist organization.

It is also a moral disgrace that HIAS signed joint letters with BDS-promoters CAIR and MPAC (which also opposes Israel’s existence, as well as promoting boycotts of Israel companies), IfNotNow, J Street (which gives platforms to leading BDS promoters), and Truah (which states that it does not reject “targeted” boycotts and divestment, aimed at the 800,000 Jews over living over the artificial old armistice lines).

HIAS’s primary mission is not to advocate for Israel and Jews, as required to be a member of the Conference of Presidents, but HIAS’ primary mission is to resettle and advocate to bring into the United States more non-Jewish, mostly Muslim refugees, many of whom are from Middle East countries where, according to ADL polls, 74% to 93% of the population is antisemitic.

Furthermore, HIAS no longer calls itself the Hebrew Immigrant Aid Society, but only by its acronym HIAS, claiming to continue to use “hebrew” would be exclusionary and outdated and the name with Hebrew in it “no longer represented the organization.”

Moreover, BDS promoters including MPAC, T’ruah and the American Arab Anti-Discriminations Committee (ADC), each of which filed or co-filed amicus briefs, and CAIR have been supporting HIAS’s multiple lawsuits opposing the current U.S. administration’s efforts to protect Americans’ (especially American Jews’) safety.  As ZOA previously detailed, HIAS’s lawsuits and advocacy in opposition to the U.S. federal, state, local and Israeli governments conflicts with the COP’s mission.  Having a HIAS Chair become COP Chair would likely severely damage the COP’s effectiveness and relationships with the U.S. and Israeli administrations.

And all of these troubling actions have occurred while Dianne Lob was Chair of HIAS.

HIAS’s president absurdly and irrationally claimed that not helping Jews is Israel-centric:

Jewish Insider also reported today that HIAS president Mark Hetfield absurdly stated:  “As a Jewish refugee organization, we have an important connection to Israel because the reason we can advocate for refugees who are not Jewish today is because the Jewish refugee problem has essentially been solved by the State of Israel.”   In other words, HIAS is claiming: “we are a Jewish organization because we don’t help Jews!”

Moreover, the need to help Jews around the world has not been eradicated.  There are hundreds of thousands of Jews in countries including France, the UK, Sweden, and Germany, where it is dangerous to be a Jew today, because radical Muslims and others perpetrate hundreds of antisemitic attacks on Jews each year.  Israel’s Jewish Agency tries to help those Jews who wish to immigrate to Israel.  HIAS could help also – but doesn’t.  Instead, HIAS campaigns against and files lawsuits against Israel, to try to force Israel to keep illegal, non-Jewish, Eritrean migrants that Israel is trying to deport, especially as many of whom are criminals.

And what about those Jews, in an increasingly dangerous Europe, who have family in America?  Or who already know English and would have difficulty immigrating to Israel?   Or have other reasons for preferring to move to America?  Unfortunately, HIAS ignores these Jews’ cries for help – while instead helping mostly Muslim non-Jews immigrate to the U.S.

HIAS’s non-Jewish mission conflicts with the COP’s missions to “advance the interests of the American Jewish community … aid endangered Jewish communities, fight anti-Semitism, combat terrorism at home and abroad, strengthen domestic security and safeguard American Jewish institutions.” In fact, resettling Muslims in America, who ADL has shown have substantial numbers who are antisemitic can harm Americans Jews and the Conference of Presidents mission to lobby for the Jewish State of Israel.

HIAS can only be a Jewish organization entitled to be a member of the COP, and entitled to have its chair serve as COP chair, if HIAS returns to its former mission of helping Jews around the world again.

Until then, we must continue to oppose making Dianne Lob the COP Chair.

We would love to hear from you! Please fill out this form and we will get in touch with you shortly.
Trending Z
Uncategorized April 27, 2020
ZOA Analysis: Most American Rabbis Who Are Boycotting Some Israeli Ministers Are From Extremist Left Wing Groups (J Street; T’ruah; JVP)
Uncategorized April 27, 2020
ZOA: Israel’s Reasonable Judicial Reform Proposals Are Good for Democracy, the Rule of Law and the Economy
News April 27, 2020
ZOA is Disappointed, Offended and Frightened by 211 U.S. House Votes Supporting Jew-Hating, Israel-Hating Rep. Ilhan Omar
Uncategorized April 27, 2020
Israel’s “Right of Return” Grandparent Clause is De-Judaizing the Jewish State – Eliminate It
Center for Law & Justice
We work to educate the American public and Congress about legal issues in order to advance the interests of Israel and the Jewish people.
We assist American victims of terrorism in vindicating their rights under the law, and seek to hold terrorists and sponsors of terrorism accountable for their actions.
We fight anti-Semitism and anti-Israel bias in the media and on college campuses.
We strive to enforce existing law and also to create new law in order to safeguard the rights of the Jewish people in the United States and Israel.
Our Mission
ZOA STATEMENT
The ZOA speaks out for Israel – in reports, newsletters, and other publications. In speeches in synagogues, churches, and community events, in high schools and colleges from coast to coast. In e-mail action alerts. In op-eds and letters to the editor. In radio and television appearances by ZOA leaders. Always on the front lines of pro-Israel activism, ZOA has made its mark.
Connect with us
Sign up for our Newsletter