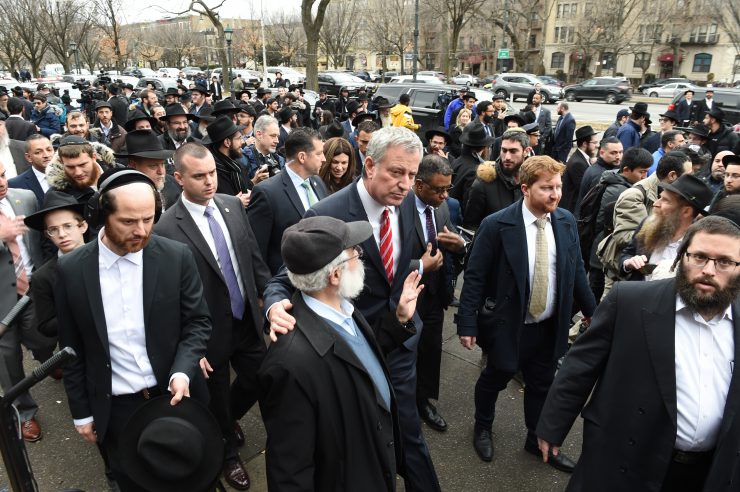 NYC Mayor De Blasio Must Retract and Apologize for His Tweet Attacking the Jewish Community; and End His Unfair Adverse Treatment of NY Jews
Press Release

The ZOA demands that New York City Mayor Bill de Blasio retract and apologize for his tweet singling out and attacking the entire Jewish community for an issue with a Jewish funeral, in a manner that can encourage antisemitism.  The mayor’s tweet is especially dangerous at this time, when Jew-haters are spreading blood libels falsely blaming the Jewish people for the coronavirus.

Our message to Mayor de Blasio is: “You need to act as the mayor of everyone in New York City – including the Jewish community.”

The Jewish community was the only group the mayor specifically mentioned in his tweet that also threatened: “I have instructed the NYPD to proceed immediately to summons or even arrest those who gather in large groups.

The mayor’s apparent pattern of unfair adverse treatment of the Jewish community needs to stop. De Blasio sent in massive police forces to disperse Jews (most of whom were wearing masks) who gathered for a funeral of a Rabbi in Brooklyn – while doing nothing about large groups of other New Yorkers who gathered close together in New York City parks and to watch the Blue Angels show. Why didn’t the mayor send in those masses of police when fringe Black radicals and criminals repeatedly attacked Jews in the streets of Brooklyn last year? And the mayor properly never attacked all Blacks because some Blacks were regularly attacking Jews.

We also note that the mayor has provided too few kosher meals to New York’s impoverished, suffering Jewish communities, while, for instance, making sure to provide sufficient Ramadan food for New York’s Muslim communities.

Our message to Mayor de Blasio is: “You need to act as the mayor of everyone in New York City – including the Jewish community.”

We would love to hear from you! Please fill out this form and we will get in touch with you shortly.
Trending Z
News April 29, 2020
ZOA Condemns U.S. State Dept. & U.S. Amb. Nides For Siding with Antisemitic, Discriminatory Palestinian & Hamas Terrorists re: the Temple Mount, Violating Jews’ Religious Freedom
News April 29, 2020
ZOA’s Klein JPost Op-Ed: There is Nothing Extreme About Israel’s New Government
Uncategorized April 29, 2020
FLASH: ISRAEL-JORDAN PEACE TREATY (1994) GUARANTEES JEWS ACCESS TO THE TEMPLE MOUNT – LET MY PEOPLE PRAY
Uncategorized April 29, 2020
ZOA Analysis: Most American Rabbis Who Are Boycotting Some Israeli Ministers Are From Extremist Left Wing Groups (J Street; T’ruah; JVP)
Center for Law & Justice
We work to educate the American public and Congress about legal issues in order to advance the interests of Israel and the Jewish people.
We assist American victims of terrorism in vindicating their rights under the law, and seek to hold terrorists and sponsors of terrorism accountable for their actions.
We fight anti-Semitism and anti-Israel bias in the media and on college campuses.
We strive to enforce existing law and also to create new law in order to safeguard the rights of the Jewish people in the United States and Israel.
Our Mission
ZOA STATEMENT
The ZOA speaks out for Israel – in reports, newsletters, and other publications. In speeches in synagogues, churches, and community events, in high schools and colleges from coast to coast. In e-mail action alerts. In op-eds and letters to the editor. In radio and television appearances by ZOA leaders. Always on the front lines of pro-Israel activism, ZOA has made its mark.
Connect with us
Sign up for our Newsletter