The Zionist Organization of America strongly condemns Congresswoman Rashida Tlaib’s (D-MI) deplorable, lie-filled May 15 tweet falsely accusing Israel of “ethnic cleansing” of Palestinian-Arabs, as well as her false claim that Palestinian-Arabs are “indigenous” to the Land of Israel and referring to the creation of Israel as a catastrophe.” Israel has been America’s most-trusted and most-loyal ally in the Middle East. We call on Tlaib’s Congressional colleagues, especially the Democrats, to repudiate her tweet. Given the dramatic increase in attacks against Jews, her words can only serve to inflame Jew-hatred. 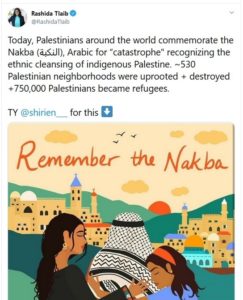 Tlaib issued the tweet to “commemorate” what she and other anti-Israel figures refer to as “The Nakba,” which they translate as “the catastrophe,” – the day following Israel’s declaration of independence on May 14, 1948.

Tlaib has a consistent record of anti-Israel/anti-Jewish pronouncements and social-media activity as well as opposing legislation beneficial to America’s most vital ally in the Middle East: Israel.

Tlaib falsely claimed in her tweet that 750,000 Arabs were made refugees. Most historians agree that 350,000 Arabs left the area mostly at the behest of their leaders and not through any action by Israel or pre-state Jews. Also, if 5 Arab nations had not invaded Israel there would not have been a single so called Arab refugee. The Arab attempt to destroy the fledgling State of Israel and murder its Jewish inhabitants caused the refugee issue. No Arab war-no refugees

Contrary to Tlaib’s claim, the Palestinian-Arab population in Judea and Samaria as well as the Gaza Strip has increased exponentially since both 1948 and 1967. Clearly this is the opposite of “ethnic cleansing.”

Tlaib also claimed in her tweet that “530 Palestinian neighborhoods were uprooted + destroyed.” According toEncyclopedia Britannica, there were about 400 Arab villages in pre-state Israel. Many still remain and are burgeoning towns and cities in Israel.

Tlaib neglected to point out in her tweet the fact that 1% of Israel’s population was killed as Israel fought off the attacking armies of five Arab nations that struck Israel on May 15, 1948, nor did she mentions the thousands of Jews who were murdered in scores of attacks against Jewish civilians in the decades prior to Israel’s independence.

This latest attack by Tlaib is consistent with her long record of anti-Israel rhetoric and votes against Israel that would help our ally Israel. These include:

Referring to Israel as a “racist country” on the basis of the lie that Israel discriminates against those “darker skinned,” supports the destruction of Israel in favor of an Arab-dominated state (“It has to be one state”), “absolutely” backs withholding U.S. aid from Israel, and openly supports the Boycott, Divestment, and Sanctions (BDS) movement, which is committed to international ostracism and weakening of Israel with a view to its eventual elimination. She accused Americans who support Israel of dual loyalty.

Tlaib was one of only 17 House members to vote against a 2019 resolution condemning the anti-Jewish Boycott, Divestment and Sanctions (BDS) Movement.

Tlaib’s activities were so bad that she was a subject of a House resolution “rejecting anti-Israel and anti-Semitic hatred in the United States and around the world.” Unfortunately, the bill did not pass.

We would love to hear from you! Please fill out this form and we will get in touch with you shortly.
Trending Z
Uncategorized May 20, 2020
ZOA Analysis: Most American Rabbis Who Are Boycotting Some Israeli Ministers Are From Extremist Left Wing Groups (J Street; T’ruah; JVP)
Uncategorized May 20, 2020
ZOA: Israel’s Reasonable Judicial Reform Proposals Are Good for Democracy, the Rule of Law and the Economy
Uncategorized May 20, 2020
Israel’s “Right of Return” Grandparent Clause is De-Judaizing the Jewish State – Eliminate It
News May 20, 2020
ZOA is Disappointed, Offended and Frightened by 211 U.S. House Votes Supporting Jew-Hating, Israel-Hating Rep. Ilhan Omar
Center for Law & Justice
We work to educate the American public and Congress about legal issues in order to advance the interests of Israel and the Jewish people.
We assist American victims of terrorism in vindicating their rights under the law, and seek to hold terrorists and sponsors of terrorism accountable for their actions.
We fight anti-Semitism and anti-Israel bias in the media and on college campuses.
We strive to enforce existing law and also to create new law in order to safeguard the rights of the Jewish people in the United States and Israel.
Our Mission
ZOA STATEMENT
The ZOA speaks out for Israel – in reports, newsletters, and other publications. In speeches in synagogues, churches, and community events, in high schools and colleges from coast to coast. In e-mail action alerts. In op-eds and letters to the editor. In radio and television appearances by ZOA leaders. Always on the front lines of pro-Israel activism, ZOA has made its mark.
Connect with us
Sign up for our Newsletter