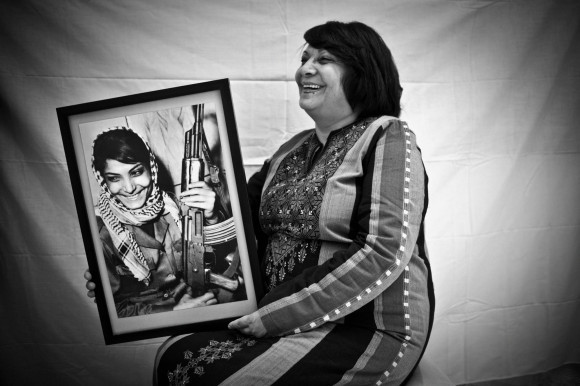 The Zionist Organization of America (ZOA) strongly urged San Francisco State University (SFSU) to cancel an upcoming program featuring Leila Khaled, a terrorist and leader of the Popular Front for the Liberation of Palestine (PFLP), a U.S.-designated foreign terrorist organization.

The program, scheduled for September 23, 2020, will be hosted by Professors Rabab Abdulhadi – who has a long record of cultivating terrorist ties, glorifying terrorists and spreading hatred of Zionists at SFSU – and Tomomi Kinukawa. It is entitled “A Conversation with Leila Khaled” who is falsely promoted as a “Palestinian feminist, militant and leader.”

In fact, Khaled is a PFLP terrorist. She hijacked an American passenger plane in 1969 and hijacked a second plane in 1970 – an El Al flight from Amsterdam. Mid-flight, Khaled and her accomplice tried to storm the cockpit. Khaled took the pins out of the grenades she had with her teeth and ordered the captain to let them in. Luckily, Israeli sky marshals were on the plane; they killed the accomplice and overpowered Khaled and the plane was diverted to London. A month after Khaled’s arrest, British authorities released her in exchange for hostages from another hijacking.  She is unremorseful and continues to support terrorism.

In a September 3, 2020 letter to SFSU President Lynn Mahoney, the ZOA expressed outrage about SFSU hosting this terrorist, writing:

Would SFSU ever even think to host Dylan Roof, the white supremacist terrorist who killed nine African-American churchgoers in Charleston, South Carolina in June 2015? How about Dzhokhar Tsarnaev, the terrorist who, with his brother, was responsible for the Boston Marathon bombing in April 2013, killing three and injuring close to 300 people? And what about Terry Lee Loewen, the terrorist who intended to detonate a bomb at an airport in Wichita, Kansas? It is unfathomable that any professor would give a platform to any of these terrorists – or that SFSU would allow them to.

How then is it acceptable for SFSU to host Khaled? Is it legitimate because her targets were Israelis and Jews?

The ZOA strongly urged President Mahoney to cancel the program with Khaled immediately. If she lacks the authority to do so, then the ZOA urged Mahoney to issue a statement to the SFSU community, “condemning this program as hateful, hostile, and against SFSU’s values. Your statement should also express that you and the SFSU community stand in solidarity with Jewish, Israeli and pro-Israel students at the university, and acknowledge and apologize for the pain and hurt the program will cause them. In addition, your statement should condemn, by name, the two irresponsible professors who are exercising zero professional judgment in order to push their personal anti-Israel agendas. They should get the message from SFSU’s leadership that they stand alone and that SFSU opposes and condemns their actions.”

We would love to hear from you! Please fill out this form and we will get in touch with you shortly.
Trending Z
Uncategorized September 9, 2020
ZOA Analysis: Most American Rabbis Who Are Boycotting Some Israeli Ministers Are From Extremist Left Wing Groups (J Street; T’ruah; JVP)
Uncategorized September 9, 2020
ZOA: Israel’s Reasonable Judicial Reform Proposals Are Good for Democracy, the Rule of Law and the Economy
News September 9, 2020
ZOA is Disappointed, Offended and Frightened by 211 U.S. House Votes Supporting Jew-Hating, Israel-Hating Rep. Ilhan Omar
Uncategorized September 9, 2020
Israel’s “Right of Return” Grandparent Clause is De-Judaizing the Jewish State – Eliminate It
Center for Law & Justice
We work to educate the American public and Congress about legal issues in order to advance the interests of Israel and the Jewish people.
We assist American victims of terrorism in vindicating their rights under the law, and seek to hold terrorists and sponsors of terrorism accountable for their actions.
We fight anti-Semitism and anti-Israel bias in the media and on college campuses.
We strive to enforce existing law and also to create new law in order to safeguard the rights of the Jewish people in the United States and Israel.
Our Mission
ZOA STATEMENT
The ZOA speaks out for Israel – in reports, newsletters, and other publications. In speeches in synagogues, churches, and community events, in high schools and colleges from coast to coast. In e-mail action alerts. In op-eds and letters to the editor. In radio and television appearances by ZOA leaders. Always on the front lines of pro-Israel activism, ZOA has made its mark.
Related Articles
OP-ED ZOA Praises Trump Executive Order on Immigration